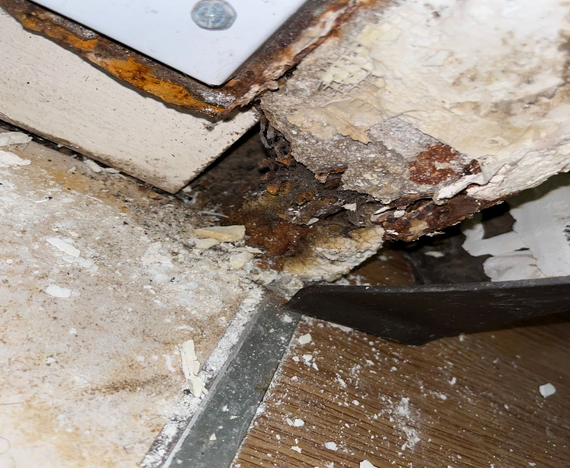 New College has welcomed its largest incoming class since 2016 this fall, which is fantastic news for an administration which has long since struggled to increase enrollment for a variety of reasons. However, what this “good news” means for third-year Joey McMahon is being confined to the downtrodden halls of Pei’s residential First Court, where water routinely floods from the bathroom sinks, mildew-covered ceilings supply a constant stream of water droplets and electrical issues generate unwelcome disturbances.

“Luckily, the excess water was used to clean the rubble that was literally peeling from the walls,” McMahon wrote in a scathing email to the student forum.

But how exactly did we get here? Navigating on-campus housing has always been riddled with difficulties, between the pervasive history of mold, mildew and water damage in buildings on campus and a chronically understaffed housing department—along with this semester’s newest obstacle: the temporary closure of the Palmer B Dormitory following the discovery of lead in the building’s pipes. And a massive incoming class ultimately leads to increasingly limited housing for everyone.

The stage was first set for this semester’s specific housing difficulties by an email sent to students on Aug. 18 by new Assistant Director of Housing and Dining Operations Sean Brueggemann (‘18). This email revealed to students days before moving in that New College was nearing capacity for on-campus housing, and that some students would be reassigned to tripled rooms—a single-room dorm arranged to house three students—in one of the Pei courts.

This email came with the reassurance that Housing anticipates having the space on campus to de-triple these dorms by the first week of November, but this is only an estimate.. Students meant to live in a doubled Pei dorm that unexpectedly tripled are still being charged the standard doubled Pei fee—$3,836 for the fall semester or $7,000 for the full year. This is $986.40 more expensive per semester and $1,800 more per year than the usual cost of a tripled Pei dorm. However, these students will either be refunded once their third roommate moves out or given a refund at the end of the year if their room is never de-tripled.

“Triples have been common throughout New College’s history, and students often found them a great way to get to know others,” Brueggemann wrote to students. “In fact, I lived in one myself! The Housing team is looking forward to supporting our amazing students in the year ahead.”

Triples may have been common in the school’s past, but the simple fact is that many of these lore-imbued reveries are beginning to unravel at the seams. Each of the Pei dormitories were originally built by the famous architect I.M. Pei in 1965. That means these corridors, ceilings and pipes have weathered 57 years of active use by the college. Pei 1 in particular has received the least amount of renovations, and has struggled to remain in use due to pervasive issues with water and electricity, as present-day students are quick to discover.

“Our sink overflowed and nobody could do anything about it,” third-year and Pei 1 resident Dakota Cohen lamented. “And it was like, there’s water all over our bathroom for like a day. They didn’t even have towels. So we had to use our shower towels and find towels from friends to like, towel up. They just said, use the water slowly. So that’s what we’ve been doing.”

“If these were built by somebody else [other than Pei] we probably would have replaced them already,” Director of Facilities Alan Burr told the Catalyst in an interview five years ago. “Because they’re very expensive to renovate.”

The vast majority of students currently living in Pei 1 are former residents of B Dorm, the dormitory recently made infamous for having high levels of lead detected in water samples taken from the sink. These students were relocated into the Pei dorms three days before new-student orientation and one week before returning students arrived on campus due to delays in the scheduled replacement of B Dorm’s potable water lines, a project meant to fix that grievous issue. Originally, the project was set to be complete at the beginning of the fall semester.

“It’s just a matter of getting parts,” Director of Environmental Health & Safety Yosef Shapiro explained. “And right now, there’s been a lot of supply chain issues. That’s for a lot of things on campus. You know, I asked why X-Y-Z things weren’t fixed, and it’s been months, and they tell me they just can’t get the parts. It slowed down in China and Taiwan during COVID-19. And I’ve been told there’s a lot of products that are hard to get right now.”

With the exodus of B Dorm residents into Pei combined with the massive influx of new students, it starts to make sense why the administration is so strapped for housing that they would start using Pei triples and assigning students to Pei 1 again, despite the recent precedent of using it primarily for on-campus COVID-19 quarantining.

Yet, there is also the detail that additional residential rooms on campus have recently been converted into staff member suites. It is not uncommon for residential staff to live on campus at New College in order to be on-call—whether they be Pei singles, studio singles or doubles in letter dorms, or ProStaff rooms in the Dortstein and Gold residence hall—but when campus is nearing capacity, this missing space is felt even more acutely by students.

“This summer, one RA suite in Dort was converted to a live on staff member suite because the first court live on-staff member suite is offline and unavailable,” Brueggemann said in an email statement to the Catalyst. “We have six rooms reserved for/occupied by live on-staff members in the residence halls this semester. Year to year totals vary, but in previous years we’ve had seven, nine, and earlier this year 11 faculty and staff in residence hall rooms since 2020.”

Decrepit rooms, student complaints and scarce available rooms on campus are only exacerbated by the limited Residence Life and Housing staff. Aside from Brueggemann, staff consists of:

Two positions in this department are currently vacant: Associate Dean of Students and a second Housing Area Coordinator. Each of these staff members ultimately reports to Vice President of Student Affairs Marjorie Thomas.

But the vacancies don’t end there: RAs are also currently understaffed. According to both thesis student Melody Scott and third-year Abby Fussell—both with three years worth of RA experience combined between them—there are only currently 15 RAs employed when there should be 19.

“ I think they [Housing staff] are looking to hire more people,” Scott said. “I know we had a lot of applicants last year, and so I don’t necessarily know why we have vacancies.”

“They told the RAs specifically that if we know anyone to have them reach out, and I know people that have reached out and have gotten a, ‘Thank you, we’ll get back to you,’” Fussell added. “I’m not sure [how soon new RAs could be recruited], especially with the training we go through, they missed all of that. It’s an entire week from 9 a.m. to 5 p.m., and we were told that the way that would happen would be that they would just do it on their own time, but with classes starting that might be pretty hard.”

Fussell also commented that there is much more pressure on RAs to facilitate roommate agreements this year, since the lack of spare housing on campus means that there are no alternatives if any pair or group of roommates have a falling out.

Both X Dorm and B Dorm have had no RAs since the beginning of the semester—although the latter is likely due to its temporary closure—but shockingly, neither does Pei 1, which should have two. Instead, the two RAs overseeing Pei 2 have needed to take on this additional responsibility, to a degree.

“All their questions are getting sent to the Pei 2 RAs, so we’re still technically interacting with them,” Second-year and Pei 2 RA Rhiannon Hanlon shared. “But we’re not obligated per se, because RAs do have to submit Resident Interaction forms.  I only have to keep up with those for Pei 2.”

“[In an emergency,] they would come to us.” Hanlon continued. “But they seem to be pretty autonomous over there. Most of the requests we get from Pei 1 are like, ‘There are chips on the wall, there are mold on the curtains, the water is coming up from the sinks,’ and were just like, ‘There’s nothing we can really do about that.’”

In an email interview with the Catalyst, Brueggemann addressed some of these student concerns and offered some insight as a former student turned employee. Brueggemann has worn many hats over the course of his New College career. Starting as a Residence Hall Director in June 2018—one month after graduating—he has since then supervised RAs and Living Learning Communities (LLCs), acted as the on-call COVID-19 contact and worked with students in on-campus isolation and quarantine, overseen summer housing, organized new and returning student check-in during orientation and more.

In his new role as Assistant Director of Housing and Dining Operations, Brueggemann is also working with the new Director of the Advocacy and Accessible Learning Center (AALC) Jennifer Meier to ensure meal plan accommodations, and facilities to get updates on B Dorm renovations.

Brueggeman clarified that the anticipated de-tripling of Pei rooms mentioned in the “Returning to Campus” email will happen once B Dorm construction is completed in either mid-October or early November, and that the new space available in B Dorm will let those displaced students return and even potentially offer additional housing for interested students.

Brueggemann acknowledged the student complaints about water damage and power failure in residential spaces, and confirmed that Pei 1 in particular has had lower occupancy on campus for the past two years, but that this lower occupancy was able to be “leveraged” to “continue COVID-19 isolation and quarantining through May of last year.”

“I’m really sorry to hear that we have students feel this way,” Brueggemann said, referring to student complaints from Pei 1. “I’d like any student who is frustrated with their living conditions to come to HCL 1 to check in with the Housing and Residence Life team. I know that our entire team, while small but mighty, is dedicated to your residential experience and helping you have a successful year in the residence halls.”

Brueggemann also stated that Pei 1 has received the fewest number of maintenance requests compared to other dorms since the beginning of August, “though is in line with the number of requests from Pei 2 and Pei 3.”

“Our Housing and Residential Life team is dedicated to our students, each of us wants to do everything we can for them,” Brueggemann said. “We’re stretched thin and have been for quite some time, but we are looking forward to adding some additional staff soon which will be able to let us provide better experiences for our community members. We want to get to know you and better support you. Our whole team is now located in HCL 1 now, so please stop by and check in!”

“In the coming weeks I hope to launch a regular message for our residential students with any updates for the residence halls, reminders and any other helpful information,” Brueggemann continued. “Lastly, I just want to wish everyone a great year ahead. The last few years have been strange, and incredibly challenging, and I’m so excited to see our community back on campus this semester.”