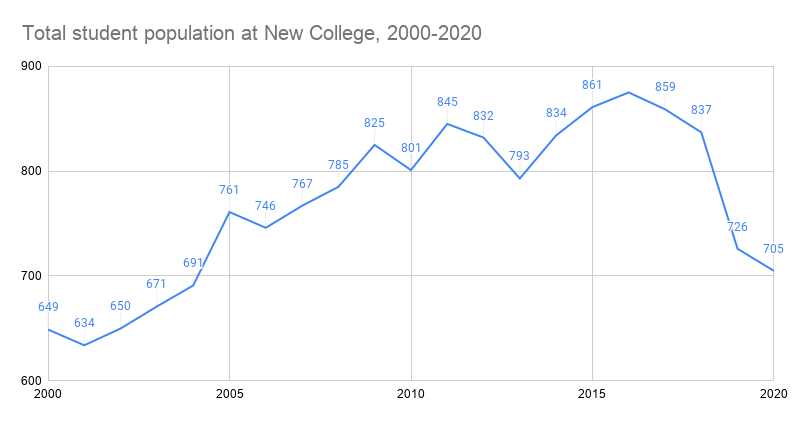 Over the last few years, the New College administration has been dedicated proponents of the NCF Growth Plan, which would see the college grow to 1,200 students by the fall of 2024. This plan has already been the basis on which new professors have been hired, and the resulting lowered cost-per-degree from the potential increased student population would be an important salve against one of the major criticisms of New College.

However, the current trends regarding NCF’s population are not encouraging. According to the NCF website, New College’s population was 705 students (676 undergraduate and 29 graduate) at the start of the fall semester. Of those, only 350 students are currently on campus. This is the result of a five-year-long population decline from 875 total students in 2016, including graduate and undergraduate students. Currently, the total student population is the smallest since its 2005 class, before NCF even began a graduate program.

Provost and Vice President of Academic Affairs Dr. Suzanne Sherman pointed to a trend of declining enrollment among small liberal arts colleges nationally to partially explain the decline in class size for New College, as well with issues in the leadership of Enrollment Services from 2017 to 2019. During this period, former Dean of Enrollment and Admissions Dr. Joy Hamm discriminated against applicants who had disclosed a disability or mental health issue in their applications, according to a  Florida Board of Governors’ Office of the Inspector General and Director of Compliance report in August 2019. Dr. Hamm resigned in August 2019.

“I believe that we are making changes at New College that can produce greater appeal to prospective students,” Sherman said in an email interview. “Examples are enhancements to career services, the opening of the Student Success Center, and the hiring of a Director of Diversity and Inclusion, among others. We also have a brand new Vice President of Enrollment Services, and we are hopeful that the plans he is putting in place, as well as greater participation by faculty in enrollment efforts, will lead to an uptick in enrollment.”