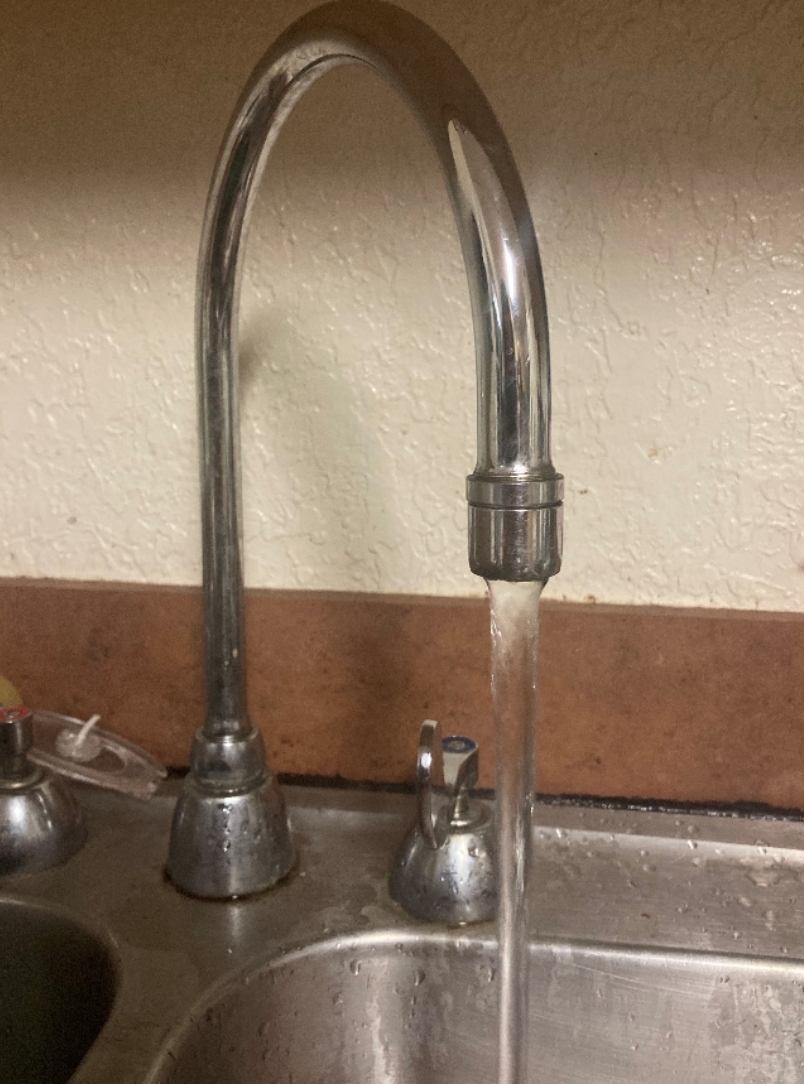 One of the many faucets in B Dorm found to draw water with dangerous amounts of lead.

On Nov. 11, administration officially confirmed that the water system connecting to the Palmer B Dormitory may contain dangerously high levels of lead—the metal responsible for the infamous public health disaster in Flint, Michigan. Two rounds of testing conducted by the independent contractor Professional Service Industries (PSI) revealed that the buildings “first draw samples”—samples that are taken after a period of non-use overnight—were far above the Environmental Protection Agencies’ (EPA) maximum allowable amount for lead contamination, 15 parts per billion (ppb). The average of all samples collected was about 67 ppb, with one sink on the second floor having an astonishing 105 ppb. For reference, homes in Flint, Michigan, were found to have an average of 25 ppb on the first draw.

PSI has recommended that residents “flush” the water before consumption by running the tap for at least 30 seconds, which dramatically reduces lead content levels to under 1 ppb. This revelation comes after months of speculation and complaints from B Dorm residents, who were outraged to learn that the administration knew the lead content on the first draw was over EPA standards since Oct. 4 but did not communicate as much to residents for nearly a month. In response, the administration has insisted that it had no obligations to share the first report from PSI, as the report’s recommendation did not explicitly state residents needed to take precautions. Yet, after the second round of testing, residents’ concerns were largely vindicated. PSI issued a recommendation to provide bottled water, install faucet filters as soon as possible and schedule a replacement of the potable water lines, and administration announced that it would commit to these changes.

This episode all started on Sept. 3, when a student circulated an email warning residents that something might be in the B Dorm water supply. Using a crude instrument that measures the total dissolved solids (TDS) in a solution, the student reported the TDS for the downstairs sink to be roughly 300 ppb. Coupled with some residents having anecdotal experiences of feeling sick after drinking the water, residents decided to ask the administration to perform a more extensive set of tests.

Administration agreed to conduct thorough testing of the water and scheduled the test for Sept. 17. The test was to be conducted on the first-floor kitchen sink tap and the backflow preventer for the building, collecting samples from both the first draw as well as from a “flush draw” taken after running the water for two to three minutes. Since the initial test was examining the samples for multiple potential contaminants, it would take some time for the results to return.

But return they did. Three weeks later on Oct. 4. The results indicated that the first-floor kitchen sink contained 50.3 ppb of lead on the first draw, and a lower 0.250ppb of the lead after flushing for two to three minutes. While it’s true that the report did not explicitly state that residents should be flushing the water before consumption, it did state that “the first draw sample is representative of water that may be consumed from that outlet at the beginning of the day or after infrequent use.” In the first report, PSI issued the recommendation that all faucet aerators should be replaced, in addition to a second round of testing with more test sites and 30-second flush samples.

Administration did not mention this report or its recommendations to residents after receiving it. Instead, they carried out the changing of the aerators without any announcement. The first communication residents received from the administration was 16 days later on Oct. 19, stating that further testing would be occurring the following day, Oct. 20. The email left out any details regarding the results from the previous round of testing, or what caused PSI to recommend a second round.

At this time, the Catalyst reached out to the administration to confirm whether the first report was received and if it could be shared. They were able to provide the Catalyst with a copy, which was then circulated to residents who took to the forum to express their frustration.

“Hey, this is the water testing results from B Dorm,” third-year and B Dorm resident Ellie Jalbuena-Cook shared in a post. “Note the 50 ppb of lead in the water compared to the 15 ppb of the EPA standard. It’s fucked. And it’s more fucked that they didn’t bother/want to tell all the B dorm residents directly.”

“We here in B Dorm have been being poisoned,” Jalbuena-Cook continued. “And when the school got this information they didn’t even reach out to us. Why? Admin has known this for several weeks and they didn’t want to tell us and instead just let us get fucking lead poisoning rather than risk a PR disaster.”

Some residents even indicated that while the administrators did not acknowledge the potential hazard publicly, in private they conveyed a different story.

“We have no idea how long it takes to build up to unsafe levels,” thesis student and B Dorm resident Olympia Fulcher wrote. “We had to ask for this report, they did not give it to us. Yosef Shapiro himself acknowledged we should not be drinking this water.”

Director of Environmental Health & Safety Yosef Shapiro would go on to issue the first communication to residents addressing the lead in the water and shared the first round of testing publicly two days after the forum posts on Oct. 28. In it, he implied that residents were not at risk as the exposure was likely minimal, and the additional testing from PSI was only for the sake of thoroughness.

“The ‘First Draw Sample’ met the EPA standards for contaminants, except at one tap, which exceeded the EPA’s level of 15ppb for Lead,” Shapiro wrote. “The level of Lead in the Flush Water Sample was far below the threshold of 15 ppb, registering at 0.250 ppb. In typical use in B Dorm, the water is rarely, if ever, off for any prolonged period of time. So, the typical exposure is more in line with the second value. That value is quite low, and far below EPA standards.”

“In an abundance of caution, the testing company recommended that we take more samples in B Dorm,” Shapiro continued. “In an effort to address any potential issues in B Dorm we have also replaced all of the aerators on the kitchen and bathroom sinks and provided bottled drinking water for residents who would prefer this option at this time.”

To determine whether the first draw sample of 50 ppb reported in the first round of testing did or did not indicate a hazard to residents, the Catalyst reached out to two University of Florida (UF) Water Institute Emeritus faculty members with expertise in environmental engineering sciences for clarification.

“The 50 ppb seems high for sure when the EPA SDWA MCL is 15 ppb [maximum contaminant level which is how standards for drinking water are known in EPA terminology],” Dr. Joseph Delfino wrote. “You show some variable data and that’s always a problem with toxic elements like lead. This is especially true since historically lead was used in various cities as the metal of choice [bad choice!] for water pipes.”

“The bottom line is that regardless of the MCL value of 15 ppb, there is really no acceptable dose for lead in drinking water or food,” Dr. Delfino continued. “The EPA set its ‘reasonable’ number because they needed a number for the MCL and also it recognizes that Pb inevitably will get into water supplies if the incoming water is ‘corrosive’ or doesn’t have a lot of buffering capacity/alkalinity in it.”

“The results that you cite are consistent with a public supply that contains little or no lead but is causing the corrosion of lead and concomitant increase of lead in the water that is first drawn from the tap,” Dr. Paul Chadik wrote. “Ever since the mid-80’s, it has been illegal to use lead solder to join copper or to use lead service lines, but there are many places in this country that have buildings and plumbing older than the mid-80’s.”

“This is why the Lead and Copper Rule, established by EPA in the mid-80’s, requires first-draw samples for regulatory compliance,” Chadik continued. “The regulations required that 90% of the samples collected from the distribution system in the residences as first-draw samples had to be below the action level of 15 ppb.”

Further, according to a Virginia Tech study of Flint, Michigan’s water, even just having a first draw sample greater than 30 ppb signifies serious lead contamination. In this case, it urges vulnerable demographics such as pregnant women and children to have their lead blood levels tested. Even in adults, it claims heightened lead levels in the blood can cause severe health effects, including cardiovascular problems, neurological and memory problems, kidney damage and high blood pressure.

On Nov. 10, the results of the second round of testing came back. It revealed that every single sink that was tested reported first draw samples far in excess of the EPA regulatory standard. While the flush draw samples produced results that were considerably safer, PSI made it clear in the second report that the water was not at any time of day to be used for consumption purposes without first flushing the faucet for 30 seconds. Further, they made their recommendations for providing bottled water, installing specialized faucet filters and redoing the potable water lines. This affirmed what residents and engineering experts were speaking to, that a high level of lead in the first draw sample indicates that the water is unsafe to drink without precautions, even if the flush sample is lower.

On Nov. 11, Shapiro shared these results with residents.

“We are committed to acting upon the recommendations described and detailed above in the most expeditious manner possible,” Shapiro wrote. “The College will continue providing bottled water to B Dorm, and is currently making arrangements to have six semi-permanent stations installed in both kitchens and all four bathrooms. The College will also  install the recommended faucet filters.”

“Finally, as recommended by PSI, the College will replace the potable water lines within B Dorm,” Shapiro continued. “This project is scheduled for summer 2022 as it will take several weeks to complete, and will require the closure of B Dorm for an extended period of time. As such, we want to avoid disruption to B Dorm students and ensure that you are able to enjoy this treasured community that you have helped create.”

When asked for comment on student complaints that no heads up was given on the results of the first round of testing for nearly a month, Shapiro responded.

“The College has been timely and transparent in requesting both sets of tests and in implementing the precautionary measures indicated in the second testing report,” Shapiro wrote.  “The implication of the question seems to be that a month span is too long for conducting two sets of precautionary tests and communicating and implementing the recommendations. In fact, the College believes we have acted remarkably quick to respond and react to student concerns, because we have a duty to protect the health and well-being of all our students.”

“The College acted upon each of the recommendations in the first report,” Shapiro continued. “Including authorizing the second set of tests, which were conducted on Oct. 20, 2021. The results were made available as soon as we received them.”

When asked whether there were any other water systems on campus that might have lead piping or fixtures that may be contaminated, Shapiro admitted that they hadn’t looked into it yet. After the interview, he planned to contact Assistant Vice President of Facilities Management Alan Burr to see if any other areas on campus might have piping that hasn’t been replaced for a long time. They were not able to confirm no other pipes were old in time for the publication of this article.