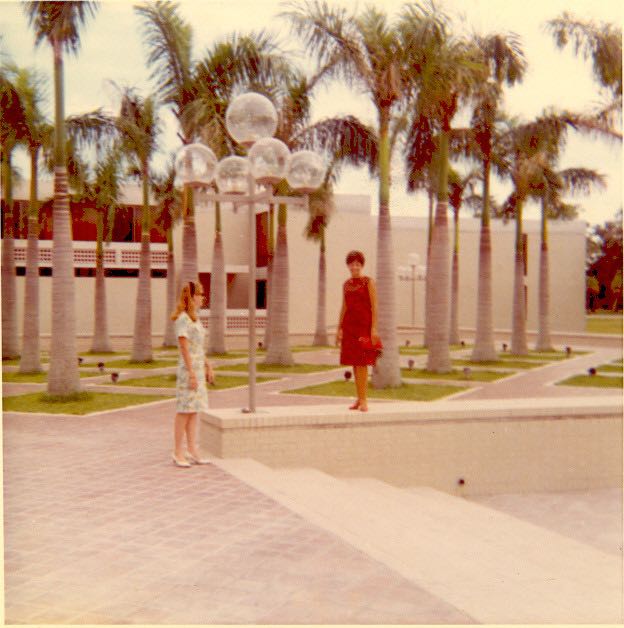 "After a year or two, someone must have found a plastic replacement for the glass globes, which had a habit of breaking (well, of being broken)," Lundell said. "Now, of course, they're long gone." (right) "A pretty good look out of first court, 60s. Notice the light-colored parapets, and the lights again," Lundell said. Photo courtesy of Jonathan Lundell ('66)

To put the Pei dorms into historical context, Alan Burr, director of facilities and construction at Physical Plant, explained it to me like this: when the first class of New College enrolled in 1964, College Hall was 38 years old. The Pei dorms, finished in 1965, are now 52 years old, older than College Hall was when the college was formed.

With a half a century of use under their belt, the dorms have begun to exhibit signs of old age, most notably in First Court.

In 1963, after I.M. Pei was hired to design New College’s campus, he told the Sarasota Herald-Tribune that the campus could not be “a stylish piece of work – it must last and be flexible enough to accommodate change.”

From one perspective, Pei accomplished his goal: in 2015 the dorms housed their fiftieth class of students. For a university as young as New College it was a significant anniversary. However, in recent years many have raised questions about the dorms’ age, sustainability and future.

“If these were built by somebody else we probably would have replaced them already,” Burr said. “Because they’re very expensive to renovate.”

I.M. Pei’s residence halls are considered part of the Sarasota School of Architecture and have a significant place within the architectural community. He’s included in the ranks of other well-known, and beloved, architects in Sarasota including Paul Rudolph and Victor Lundy. The fact that the same person who designed the Louvre Pyramid in Paris also designed a set of college dorm rooms adds some credibility to Sarasota’s standing in the architectural scene.

“Even if it [the Pei dorms] wasn’t officially considered [historical], local architectural culture would want to make sure it got preserved so we have not made any plans to tear them down and we would like to come up with the money to properly renovate them,” Burr said.

In 2007 Physical Plant renovated Second Court. They redid the interior finishings, upgraded the air conditioning system from a two-pipe system to a four-pipe system and created showers on the first floor. A four-pipe system is more equipped to deal with humidity, as well as the temperature inside the room; most of the rooms in Third and First Court still have two-pipe systems.

When Burr accepted his current job in September of 2013, he conducted a walk-through to evaluate the status of the residence halls and decided that they would focus renovation efforts on Third Court because “believe it or not Pei 3 was way worse than Pei 1.”

They didn’t get to install the 4-pipe AC system because of time and financial constraints, but otherwise did almost the same renovations they had done in Second Court. Burr reported they still have issues with expansion cracks on the exterior of the buildings and that the envelope of the building is not as watertight as they would like.

One of the significant changes of the Third Court renovation was replacing the notoriously slippery red tiles in the courtyard with concrete pavers. Like many things at New College that have stayed the same, the red tiles have always been a liability during a rainstorm.

“When it rained, the red tiles became dangerous,” Ron Overving (‘06) commented on Facebook. “I know a few people that needed stitches after slipping on those tiles.”

One of the biggest issues Physical Plant is dealing with in each court (but not each room) is a bad detail on the second floor decks and sliding glass doors.

“On the second floor there’s a construction joint where the deck meets the floor of the building and that doesn’t have a water seal in it so when it rains heavy sometimes water comes from the deck and it goes through that or it goes through the sliding glass doors and into the interior and then it goes down to the room below and it rots the ceiling out, right above the skinny window,” Burr said.

This issue has been ongoing since the first class moved into the dorms. According to alum Cheryl Soehl (‘65), flooding and mold were a problem from the beginning.

“Pei clearly did not understand the Florida climate when he designed the dorms. None of us liked to wear shoes and everyone became very adept at jumping over the large and very hot tiles in the palm court,” Soehl commented on Facebook. “Most of the rooms I lived in would flood underneath the sliding doors to the balconies, and carpet would get moldy and smelly. We still loved our space.”

“It’s a fair criticism of Pei that he had no idea how to build for a subtropical environment like Sarasota,” Lundell wrote in an email interview. “Even so, I’d say that by and large we rather loved the place.”

The renovations in Third Court cost around $2 million. Adding the 4-pipe system would be another million. To renovate First Court it would take about $4 million, although five rooms in First Court were renovated over the summer. Burr reported that Second Court also needs some updates.

“It’s challenging to come up with the resources to do that,” Burr said. “Otherwise they’d be in better condition.”

According to Burr, the state of Florida does not financially support Housing like they do the educational aspects of the school because Housing is considered an auxiliary – students pay for housing separate from the amount they pay for tuition.

“They’ve struggled financially to take care of housing and you can see it right there,” Burr said, referring to the details around the First Court bathrooms.

Despite cockroaches and a rotting carpet in his room, Steve Barbeaux (‘88) still enjoyed the Pei experience.

“We were young, barefoot and really didn’t care so much,” Barbeaux commented on Facebook. “[I have] mostly good memories from those days, but with a backdrop of some pretty funky dorms that simply couldn’t be cleaned.”

Hopefully First Court will get the makeover that it’s long been due, but until then it seems New College students will continue to get by, enjoying the Pei rooms, or rather the experience they create, even with their flaws.

Information for this article was gathered from questia.com.