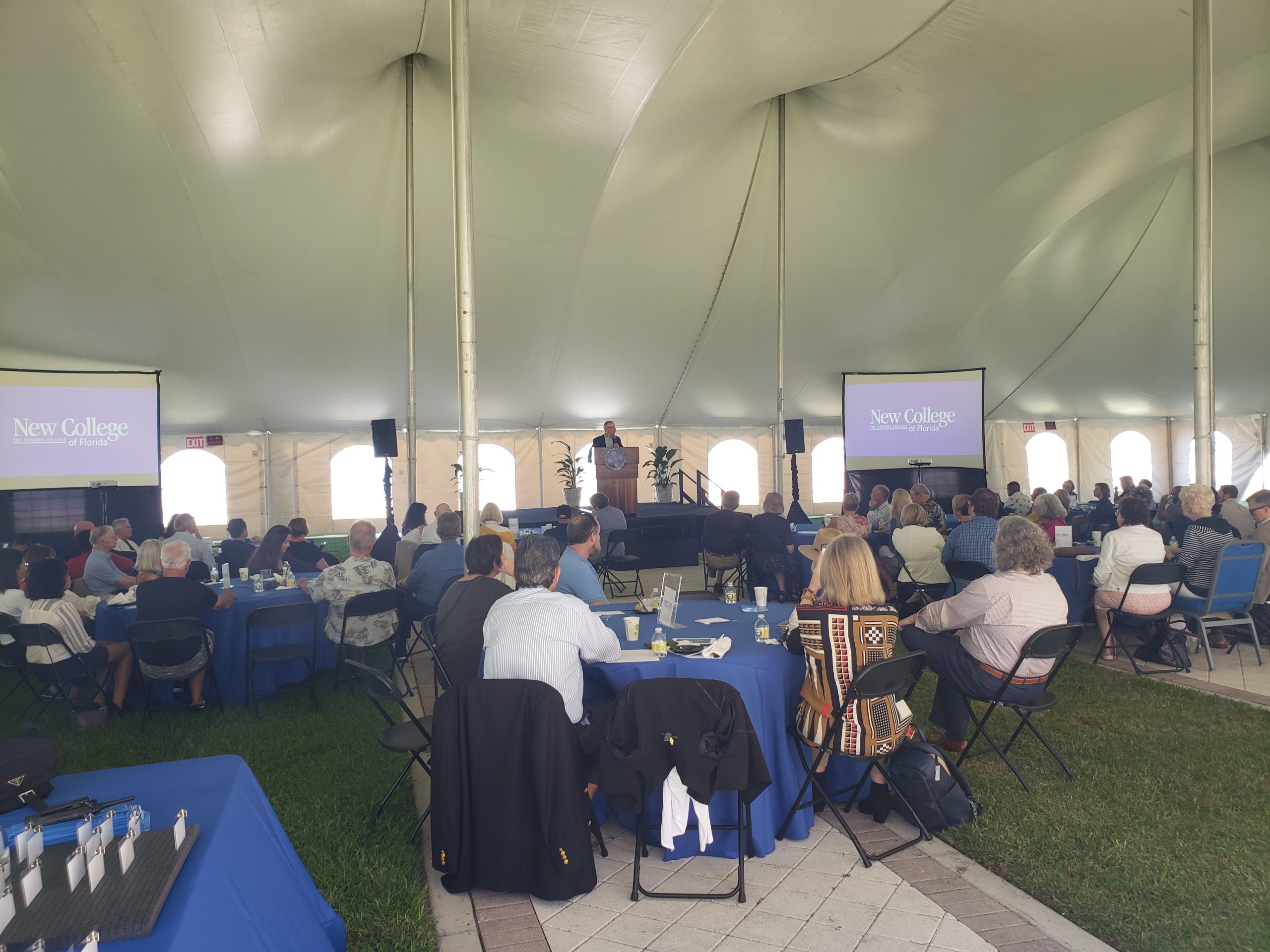 The New College Challenge was first announced in Apr. 2022 as a single presentation about spaces and places on campus in the Sudakoff Conference Center. Now, six months later, the New College Challenge Launch Week reintroduced these questions to the campus from Oct. 25 to 28 through a series of lectures and panel discussions. Much was still vague about the Challenge when it was first introduced to the community, but with it came the promise to keep students involved as the finer details surfaced. Now, with over ten hours worth of events in one week and a more solid conversation about the Challenge established, how many questions have really been answered and how involved have students been able to get?

When the Challenge was first announced, the re-evaluation of spaces on campus was the primary focus, but the Launch Week put the Challenge in conversation with entrepreneurial and career opportunities, architectural renovation and initiatives to prepare the campus for the threat of climate change.

While the collaborative “charrette process” was a defining feature of the Challenge when it was first introduced, it now more firmly includes experts from six different institutions such as Yale University, University of Florida (UF) and University of South Florida (USF). The most concrete example of progress with the Challenge on campus thus far has been the “Planning for Campus Resilience Challenge” course offered this fall by New College Challenge Co-Chair and Professor of Sociology David Brain, which has allowed New College students to work directly with students from other Florida universities in the areas of urban design and planning.

“I don’t feel comfortable trying to teach design on my own here, so to be able to partner, that’s really exciting to me,” Brain said to a Catalyst reporter during a Launch Week event. “I still, to this day, feel like my design education was the best part of my education in my first and second year of college.”

“At this point, it seems like it has mostly been a thought experiment,” thesis student and member of Brain’s course Gus Frank told the Catalyst. “Next semester, it seems like it’s really going to kick off and be more actualized and material change will hopefully start happening.”

With 234 supporters contributing a total of $4,880 in donations for the duration of the Launch Week, several administrators, community members and even state politicians were in the audience for various events. Sponsors for the Launch Week were the Kathleen Binnicker Swann Foundation, the Charles & Margery Barancik Foundation and the Florida Climate Institute. State politicians in attendance included Republican Senators Jim Boyd, Joe Gruters and Ray Rodrigues, and Republican Representatives James Buchanan and Fiona McFarland.

The first event of the Launch Week was a brunch held on Oct. 25 at the bayfront with approximately 130 guests, which included a video presentation, a panel discussion and a lecture from President’s Advisory Council member William “Bill” Dudley (‘74). The video presentation began with footage from Hurricane Ian, and emphasized the role that the New College Challenge can play in rebuilding a stronger and more supportive campus for future emergency events.

“With support from a class now underway at New College and input from our community conversations, our partner institutions will teach their own classes about how our campus and community can become more resilient,” the video explained. “As we emerge from the Challenge with a sharper vision of what New College can become, we’ll see more clearly how our campus can serve as a community incubator for budding leaders to solve big problems, and how to protect ourselves against the forces of Mother Nature.”

During opening remarks, President Patricia Okker also spoke on how New College holds the potential to deviate from the “status quo” model of North American private liberal arts universities—and towards an institution that will encourage in-state employment post graduation.

“These transformations have already started here at New College,” Okker said. “New College students are paired with professional career coaches even before they arrive on campus, our faculty integrate career outcomes into the curriculum and we have a goal to provide an internship for every student at New College. This approach to career education and work-based learning has garnered national attention and it is resonating with prospective students and their families.”

The panel included similar conversation, and featured Director of Florida Center of Community Design and Research at USF Taryn Sabia, President and CEO of the Charles & Margery Barancik Foundation Teri Hansen and Chancellor of the Florida Department of Education’s (DOE) Division of Career and Adult Education Kevin O’Farrell. With formidable experience in economic development initiatives, nonprofit leadership and urban development planning between the three of them, the three primarily discussed Florida’s growing economy and ways that New College might adapt and prepare graduates for this upcoming change.

“The state, by 2030, is going to have about 26 million more residents, about 50 million more annual visitors and 3 million more drivers,” O’Farrell said. “So the question is, how do we prepare for that, where do we go and what do we think about higher education?”

“I am inflamed with the passion that our panelists had for education in general, but collaborative education and entrepreneurial-based education specifically,” New College Foundation Board Chair Alison Gardener said to a Catalyst reporter during the brunch.  “I couldn’t ask for more enthusiasm, and I think we can probably bundle that enthusiasm and direct it into something as important as the Challenge.”

The “Climate Crisis Now! Learning and Landscapes in a Changing Environment” lecture the following day on Oct. 26 at the Mildred Sainer Pavilion was both a part of the New College Challenge Launch Week as well as New Topics, an annual lecture series hosted by both the college and the New College Foundation. The guest speaker was Founding Director of Stoss Landscape Urbanism and Harvard Graduate Professor of Landscape Architecture Chris Reed, who spoke on how university landscapes have potential to be more than “just a form for circulation, a way to get from here to there,” but a way to “create really robust and enriching environments.”

Reed discussed a few campus planning traditions evident in New College’s own landscape—namely, buildings set around large open spaces, often lawns, which are used primarily to get from one place to the next. This carries with it a few issues, however, such as lack of biodiversity, shade in outdoor areas or welcoming social environments for students.

“I was told that this is one of the most vibrant social spaces for students,” Reed said, referring to a photo of Palm Court. “And you’d never know it by looking at it.”

Some of Reed’s previous renovation projects involving colleges include the Harvard Science Center Plaza and the University of Michigan. Recurring renovations between these institutions have included the incorporation of native plant life, irrigation systems meant to seamlessly blend in with the surrounding architecture and increased seating in heavily trafficked areas, meant to encourage student gatherings.

“We need to embrace this change,” Reed said, speaking on the ways that climate change necessitates new ways of thinking about landscape and architecture. “The way forward is not to ignore it, the way is to embrace it through research, modeling and testing, and by integrating climate solutions into lush, regionally-adapted landscapes.”

The Oct. 28 all-day Designing for Resilience Symposium closed out the Challenge Launch Week. About 100 guests gathered at the bayfront from 8:30 a.m. to 4:30 p.m. to listen to several experts in architecture and community resilience describe their contributions to climate change infrastructure in different cities across the country, such as in Nantucket, Massachusetts. As this coastal city is under threat of rising sea waters, the ReMain Nantucket project seeks to provide innovative solutions to carry the seaside town into the future. The efforts of the ReMain Nantucket project have served as an inspiration for what New College’s future could look like throughout the Challenge’s inception.

The audience included a wide variety of individuals, including local architects, Board of Trustee (BOT) members, alums and UF students studying community resilience, who sat in on Brain’s “Planning for Campus Resilience” course during Launch Week for the opportunity to collaborate with New College students.

Additionally, BOT Chair Mary Ruiz (‘78) described the New College Challenge as a “call to New College to be its highest and best self” and as an opportunity to “come together and create something visionary.”

However, noticeably absent from the New College Challenge Launch Week events were members of the current student body. While attendance was high from community leaders and administrators working directly on the Challenge, attendance from students and faculty was comparatively low.

This coincides with longstanding student concerns about administrative projects for the school which do not include students’ voices to the necessary degree, such as the costly and controversial 2018 library renovation and ongoing complaints about New College’s contract with Metz dining. Though the New College Challenge includes the students in Brain’s class, many students remain confused on what the challenge actually entails.

“My goal is to make sure this project has the interests of the students, the community and the staff at its core,” Beck said. “I want to make sure people are able to voice what they want to see most and make sure their concerns are heard.”

Frank also advises that students passionate about playing a role in the Challenge sign up for Brain’s course, which will continue in the spring.

“Honestly, if you’re passionate about anything on campus, there’s a way for you to get involved,” Frank continued. “Whether it’s volunteering at the garden or making a focus group or whatever, New College is very unique in that if you put the effort in, you can have an impact on whatever you want to have an impact on. But the thing that is not going to be helpful is just complaining to blank air space or the forum about changes if you haven’t actually tried anything to prevent the changes from happening or causing good changes.”

Beck said that he believes that the project could be a “really good thing for the future of the college,” but could also follow the path of many previous administrative projects which ultimately spend precious capital resources and do not improve student’s lives.

“I could also see it going down the path like a lot of other institutional ambitions which have sort of drawn a lot of push-back from students, and that’s what I’m hoping to avoid,” Beck continued.

Frank also shared concerns about the Challenge ultimately being spearheaded by entities separate from New College, or significant choices about campus space being made by those who will not be impacted by it,

“I just feel like I know what will happen with this Challenge because I’ve been at this school for so long,” Frank said. “There’s going to be a lot of PR, and then we’re going to accept one design proposal that comes from a perspective that is not New College and has very little New College input on it.”

Frank went on to say that there are already several improvements that can be made to New College’s campus without getting other institutions or foundations involved.

“Open the Four Winds, get a better dog park,” Frank elaborated. “We’re improving Caples right now, but the Council of Green Affairs (CGA) has created a beautification proposal that we’ve been pushing for the last two years and it’s been getting almost no feedback or attention until this Challenge started. Things like that, where students are already working to improve campus spaces, it’s just not being acknowledged by the administration.”

“I would like to see that this Challenge focus less on appealing to donors and the donating class, and more to the students who are actually living and will have their lives affected by changes made to campus space,” Frank concluded.