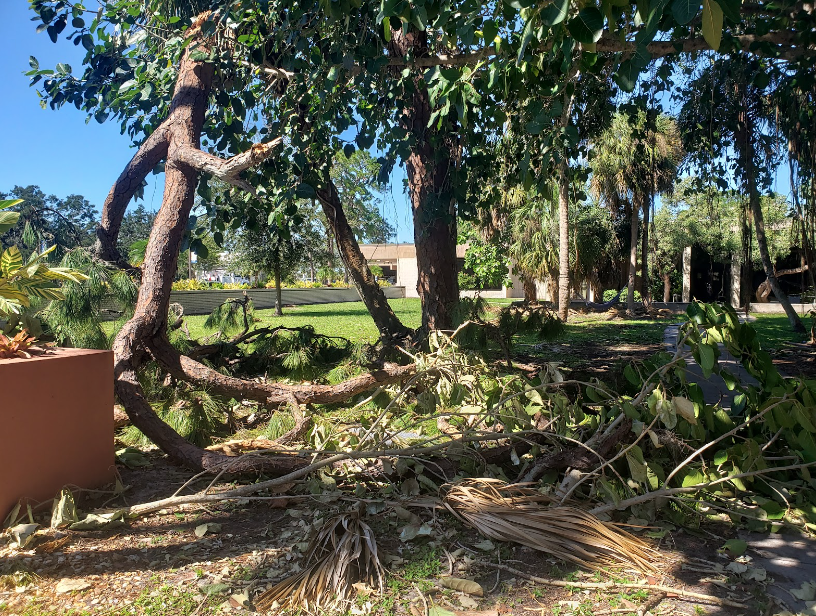 Plant debris in the Nook on Oct. 2---branches blocking the sidewalk and dangling half-suspended. (Photo taken by Sophia Brown)

After New College’s Communications department announced to the campus community on Sept. 30 that full business operations would resume on Oct. 3 and that classes would resume Oct. 4 in the wake of Hurricane Ian, many who had evacuated beyond the Sarasota-Bradenton area were left with the same question—would they really be able to safely make it back on time?

This opening date left a three-day window for students to return to campus and resume classes—students with widely varying evacuation plans and access to resources following Hurricane Ian. And while this was more time allotted than the initial order to evacuate on Sept. 26—which gave students roughly 20 hours to leave campus before residence halls closed at 8 a.m. the next morning—the journey back to New College has been impeded for many by flooded roads, structural damages, unreliable Internet and power, as well as mental and financial burden.

Even so, classes began on Oct. 4 as scheduled, primarily in-person with some stipulations—but damages on campus including a broken traffic signal and various destroyed trees, as well as limited virtual alternatives available following Hurricane Ian has many students voicing concerns about mental health and physical safety on campus as New College attempts its own version of hurricane recovery.

The Road Back to Campus

On the surface, the choice to reopen campus feels reasonable when one assesses the relatively light damage sustained by Sarasota. By Sept. 29, after Hurricane Ian had officially passed over Sarasota, damages to the town included fallen trees and power lines in roadways, as well as some debris and minor structural damage—primarily destroyed signage along Tamiami Trail and a broken traffic signal at College Drive. Damage to campus has also been light when compared to other areas in Sarasota. For example, Sarasota Bradenton International Airport faced damage to the front exterior and roof, and at Sarasota’s University Town Center (UTC)—which is only about 7.5 miles east of campus—flooded to the point where cars could not safely pass through its parking lots.

Sarasota has also fared when compared to our neighbors in Venice, Punta Gorda and Fort Myers, all of which suffered from flooded roadways and major structural damage following the storm. Even Central Florida, which is typically spared the devastating effects of tropical storms, was hit surprisingly hard by Hurricane Ian with up to 14 inches of floodwater in some places as of Sept. 29.

But with damages so widespread and with so many areas facing varying degrees of mobility and resources, not all students have equal opportunities to return to campus in a safe or timely manner. As of Sept. 29, Florida’s Turnpike in Orange County has been shut down due to significant flooding, raising potential travel problems for those who evacuated to the area. More specific to Sarasota, I-75 in Sarasota County remained closed for several days due to flooding from the Myakka River, directly impacting those traveling to campus through the North Port and Englewood area, only to reopen serendipitously on Oct. 1.Access to major highways steadily improved throughout the week—notably, the Sunshine Skyway Bridge reopened on Sept. 29 and I-275 and I-95 were both relatively unimpeded—but power outages and gas scarcity have both proved to be lasting problems impacting students’ ability to return to campus. According to the New York Post, 850,000 Florida homes and businesses lacked electricity as of Oct. 2, and some parts of the state had lines for gas lasting up to six hours on the same date. As of Sept. 30, select gas stations in both Sarasota and Manatee County were operating with limited options.

On Oct. 3, the day before classes were scheduled to restart, the Office of the Provost announced—in a statement signed by New College Student Alliance (NCSA) President and third-year Grace Keenan, Faculty Chair and Associate Professor of Computer Science Matt Lepinski and Provost Suzanne Sherman—that “it has become clear that we need greater flexibility than was previously anticipated,” and that faculty were invited to hold classes in-person or virtually for the upcoming week.

The statement included information about a survey released by the NCSA on Oct. 1 to gather input on the yet-to-be-confirmed plans to resume classes on Oct. 4. 162 students responded to the survey, the majority of which felt that Oct. 4 was too early in the week to start classes and could only or would prefer to attend classes if they were virtual. Keenan later elaborated during an Oct. 5 Senate Meeting that out of the 162 participants, only 17 students agreed with the decision to resume classes on Oct. 4, only 16 agreed with the choice to hold in-person classes and only 10 said that virtual classes would not be an option for them due to power failure off-campus.

Despite this feedback, the Provost’s Office did not firmly settle on virtual or delayed classes like the survey indicated that students would prefer. However, it did include several conditions for how classes should be conducted from Oct. 4 to Oct. 7—no expectation of attendance during this time, acknowledgment that not all students will be able to participate in classes and no exams, presentations or similarly high-stakes assignments.

Opinions about how soon is too soon to resume classes appears to be evenly split across the state, as six out of the 12 universities in the Florida State University System (SUS) reopened on Oct. 4 according to a press release from the Florida Department of Education. Currently, the expectation from the Provost’s Office is that fully in-person classes will resume at New College on Oct. 10.

However, the impacts of this decision to resume classes and to encourage students to return to campus were only revealed more in-depth during a Senate Meeting on Oct. 5. During this meeting, discussion was led by Keenan in order to gauge student opinion on the amount of time they were given to evacuate and to return to campus and the appropriateness of resuming in-person classes on Oct. 4.

Several students who spoke during this meeting expressed that they felt it was inappropriate to be given less than 24 hours to evacuate campus and then expected to resume standard in-person classes and operations by Oct. 4, especially considering that students at the neighboring Ringling College of Art & Design were given from Sept. 25 to 27 to evacuate and will not resume classes until Oct. 10. Various other students shared the opinion that it was upsetting to ask students living in Z Residence Hall in particular to return and resume classes on Oct. 4, when by the time of this announcement on Sept. 30, Z Dorm had no power.

One Z Dorm resident who attended the meeting in person claimed that while Z Dorm tentatively regained power on Oct. 3, residents were told not to expect consistent power until Oct. 4, meaning that those students were expected to attend classes without access to hot water, functioning toilets and limited options for food from the day before. Another Z Dorm resident who attended virtually explained that these power issues were the primary reason that they had chosen not to return to campus.

Some students during this meeting also described attending classes on Oct. 4 and 5 with no virtual alternatives and inflexible assignments, which goes against the requests of the Provost’s Oct. 3 announcement.

Additional concerns arose during the Senate Meeting as to how thoroughly the campus had been assessed for its safety by the time students were asked to return, and about the seeming lack of any preexisting hurricane preparedness protocols. Notably, Resident Advisors (RAs) in attendance for this meeting confirmed that there were not given any hurricane evacuation protocol or any warnings that an evacuation may be taking place in advance.

This, combined with the survey results indicating that the majority of students were not able to or comfortable with resuming in-person classes on Oct. 4, raises concerns, Keenan said, with the not just campus safety and living conditions following Hurricane Ian, but overall mental distress experienced by students at this time.

“I’ve never been more concerned about burnout, and we were already coming from a really poor situation before the hurricane,” Keenan said during the Senate Meeting.

Keenan revealed during this Senate Meeting that the President’s Advisory Council—a collection of administrators on campus who report to President Patricia Okker—met on the morning of Oct. 4 in a meeting that Keenan also attended, where she shared concerns about the endangerment of students. Keenan claimed that during this meeting it was revealed that—despite continuous promises from Communication as early as Sept. 29 that a campus safety assessment would be conducted before campus would be reopened—the structural soundness of damaged trees on campus at the time of this meeting was unclear, despite students being allowed on campus as early as Oct. 1.

Perhaps the most evident example of unsafe conditions persisting after campus had been reopened was the non-functioning traffic signal on the intersection of Tamiami Trail and College Drive. While the New College Emergency System sent out multiple phone calls, emails and text messages alerting students that this traffic signal was not operating and to use extreme caution, the traffic signal was not fixed until Oct. 3—after a New College student had been involved in a car accident on that intersection earlier the same day.

A series of concerning details are at work here—the complications caused by a lack of power in Z Dorm, the unassessed structure of trees on campus, the damaged traffic signal and the ensuing accident, as well as the majority student opinion that in-person classes from Oct. 4 to Oct. 7 are inappropriate and the lack of universally-applied accommodations during this time. Keenan also stated on Oct. 5 that she has felt dismissed and told she was “too emotional” when bringing these concerns to members of the President’s Advisory Council.

In response to these concerns and the concerns of other students shared in the Senate Meeting, Keenan has encouraged students to take any complaints they may have directly to the appropriate administrative channels through two anonymous surveys sent out to the study body on the night of Oct. 5.

One survey, the Class Reporting Form, is meant for students to leave comments about whether they feel that their professors have complied with the guidelines established for classes on Oct.4 through 7, and opinions they may have on the guidelines themselves. Responses to this survey will go to Provost Sherman.

The second survey, the Student Complaints form, is meant for more broad concerns about hurricane protocol, safety on campus and mental health in relation to choices made by the administration. Responses to this survey will go to Chief Compliance Officer Alex Tzoumas.