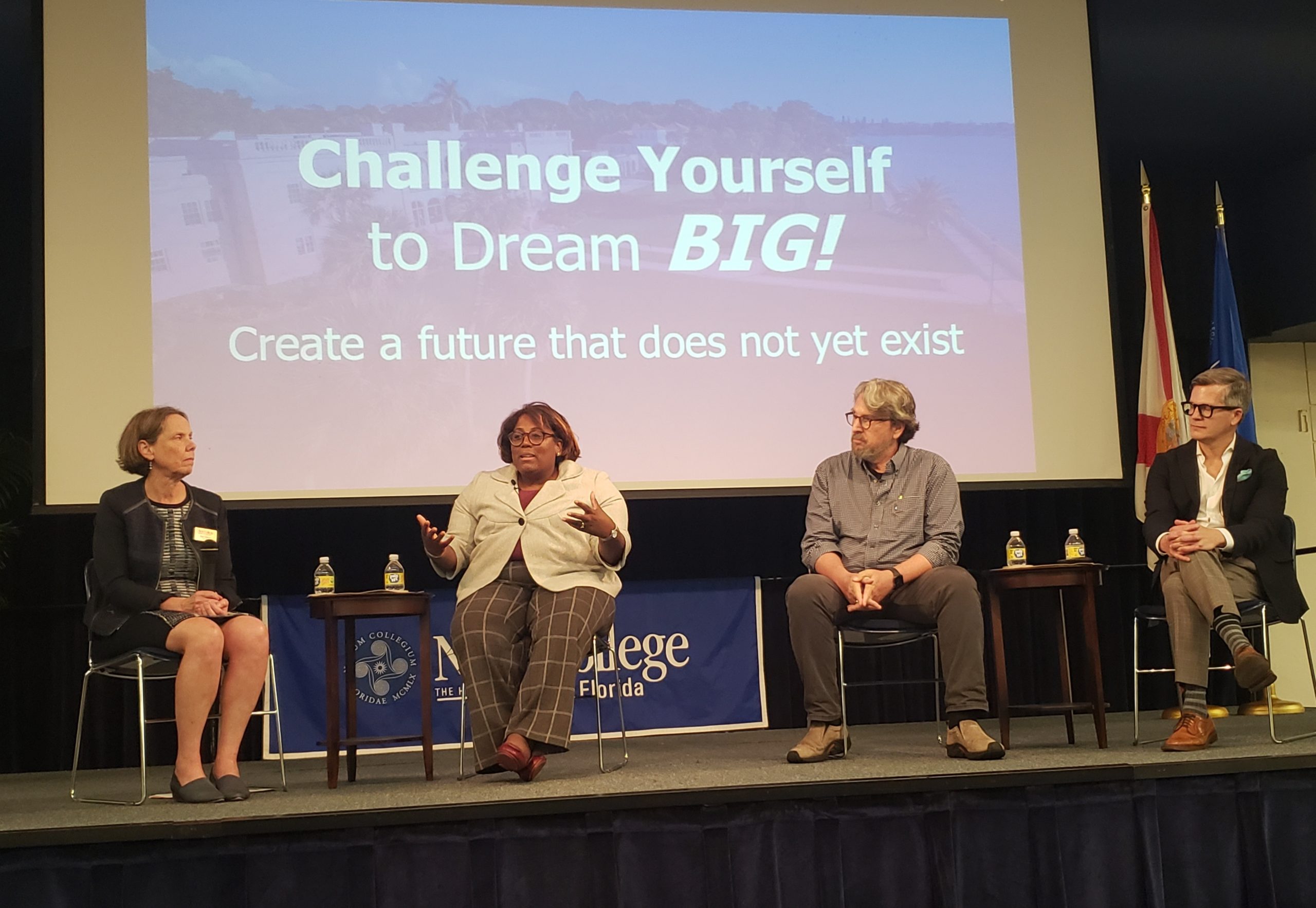 On Mar. 18 during a Catalyst interview, President Patricia Okker alluded to something called the “New College Challenge,” described it at the time as a wide-scale renovation of New College’s spaces and places, and promised to release more information at a later date. That date came on Mar. 29 when Okker issued an email announcement, elaborating on the Challenge as a yearlong “bold—yet achievable—vision” with a focus on New College’s buildings and relationship to the surrounding environment. This announcement was soon followed by a New College Challenge Town Meeting on Apr. 7 in the Sudakoff Conference Center and an informal Student Forum on Apr. 8 at Z Green. Together, these events paint the portrait of an open-ended yet ambitious long-term revitalization of campus, one that features several key figures spearheading the movement and that promises to further include the New College community and the Challenge develops.

In these early stages, the New College Challenge can best be described as a series of questions: how do spaces and places on campus construct an effective living and learning environment? In what ways does the physical campus address issues of accessibility and sustainability? And how can gaps between academic programs and student life be bridged through renovations of campus? These are questions that Okker explained have been following her since she was first selected as President.

“From the very beginning, people started asking me questions about some of the big issues about some of our buildings,” Okker said during the Town Meeting. “I got questions like, ‘What do you think we should do with Caples?’ Or, ‘What are we going to do about the lack of accessibility on Cook and College Hall?’ Or the really big question of, ‘What are we going to do about the Pei renovation?’ The honest answer in my head was always, ‘I have no idea.’”

To begin answering these questions, Okker suggested that there are four ways that the New College Challenge asks us to start considering the resilience of the campus, and how campus has changed since 1960 when New College was first established. There is intellectual resilience (a focus on academics and the standards of educational spaces), social resilience (inclusivity and vibrancy in student and faculty spaces), environmental resilience (as conversations of climate change and coastal conditions have developed exponentially in the past 30 years) and economic resilience (to address shifting career needs for students and attracting and retaining staff at New College).

“This group of external advisors will provide strategic advice about the Challenge, and their focus is on ensuring that we have the financial capacity and appropriate collaborations necessary to implement the action plans created during the challenge,” Okker explained, referring to the President’s Advisory Council.

The New College Challenge’s leadership will not be limited to these people, however, as a defining aspect of the Challenge seems to be a push for inclusivity.

“The way it’s going to work is that we will start with the conversation being limited to our immediate people on campus, and the first thing we’ll do is talk about who else needs to be a part of this conversation, if it will expand to the immediate residential neighborhoods on all sides,” Brain elaborated during the Town Meeting. “We want to include people who already have a stake, but we also want to include people who might bring something to the process.”

Gaining these additional community voices will—ideally—happen through another one of the New College Challenge’s defining features: the charrette process. A charrette refers to a period of intense collaboration and problem-solving, and is often used in the world of design. Inclusivity aside, Okker claimed in her Mar. 28 email announcement that charrettes also prioritize creative collaboration, transdisciplinary opportunities and concrete, actionable plans. But don’t just take her word for it—Brain and Hylton are both national experts on charrettes with significant prior experience.

“I feel as though I have been preparing for this for 25 years, since I first started the research that involved observing charrettes,” Brain said. “What interested me about charrettes was, first of all, it was a research site where I could observe designers at work. Then I got interested in the way they were engaging with the public, changing the relationship and the process of creating places, and the way that the community could engage in that process. I found myself, over the course of 25 years, transitioning from watching as a researcher to being asked to join charrette teams to help them engage with communities, to teaching professionals how to do some of these things.”

But while students may already be familiar with Brain, Hylton is the new face between the two. Architect, historic preservationist and educator, Hylton is also the Historic Architect for Climate Change as appointed by the National Park Service, the first to occupy said position. But looking past the grandiose title, Hylton also has intimate ties to the Sarasota area, and cited it as what sparked his love for architecture.

“As a 12 year old, growing up—I’m a hillbilly by the way, from eastern Kentucky—we came to Sarasota. It was the first time this Kentucky boy saw innovative modern architecture and it changed my world,” Hylton described during the Town Meeting. “A big part of why I’m standing in front of you today is because of Sarasota. I love this community.”

In the past, Hylton has worked for the World Monuments Fund (WMF), where he created the Modernism at Risk program, focused on preserving modern architecture. He has also participated in the recovery efforts of cultural properties in New Orleans and Mississippi following Hurricane Katrina alongside the Federal Emergency Management Agency (FEMA) and the National Trust. Locally, Hylton spearheaded the 2021 Architecture Sarasota MOD Weekend, celebrating modernism in Sarasota.

Perhaps Hylton’s most ambitious project—and what the New College Challenge is modeled after—is the “Envision Resilience: Nantucket Challenge,” launched in 2020. This charrette brought together scientific experts, community members, business leaders and participants from Harvard, Yale, Northeastern University, University of Florida and University of Miami to tackle rising sea levels at Nantucket Island, and revamping spaces and places to address this issue.

“I think that New College really is going to lead by example on this, and be a model not only for the region and the state, but nationally and globally,” Hylton stated. “When you visit here in 2060—which will be the 100th anniversary of New College—what is the campus you want to visit?”

The current timeline of the New College Challenge is vague, but like other aspects of the Challenge, this seems to be intentional and will develop further over time. Hylton explained during the Town Meeting that the first phase in Spring 2022 is to create teams and advisory groups on campus, as well as find potential funders. During Summer 2022, Brain will be creating a yearlong course revolving around the New College Challenge, as a way to get students involved and also allow them to earn course credits for doing so. The New College Challenge will be launched to the public in Fall 2022, and the charrette will be implemented in the Spring and Fall of 2023.

On top of Brain’s upcoming course, students will also have the opportunity to get involved through the New College Challenge Student Internship. The position description and qualifications can be found on Handshake. One to two positions are open for this internship, which pays $15 per hour and will have interns working 20 hours a week during the Summer of 2022, and two to four hours a week during the Spring and Fall of 2022. A scholarship for Summer 2022 Campus Housing will be awarded to candidates who need to live on campus. The deadline to apply is Apr. 18.

Several questions and concerns were raised by community members during the Town Meeting, which included the New College Challenge budget, whether renewable energy production would factor into these renovations and how long-term construction might impact student life and functionality on campus. Okker and her team were unable to provide concrete answers to these questions at this early stage, and these topics will need further consideration.

“This obviously will take resources to deliver on this,” Okker said. “It’s also a process designed to bring resources, but we’ll also have to invest in resources. We are already having initial conversations with prospective donors, both individuals and foundations that might want to be a part of this process.”

“I don’t yet have a detailed budget about the full cost of this year-long process,” Okker later continued. “You don’t have all of the details worked out before you start that, because then you’re in this very narrow lane.”

The Student Forum held on Apr. 8 and hosted by Hylton, Brain and Crawley allowed students to directly discuss their wants and needs in terms of campus spaces and places. The Pei Dormitories and the Four Winds Cafe were common talking points. Hylton explained during the forum that he had toured the Pei dorms just the day before, and has also visited them in the past. He expressed the desire not to tear down Pei and start from scratch, but to instead approach Pei renovations from the angle of “undoing decisions made on a tight budget,” and asked the question as to whether the Pei dorms are being taken care of.

A few different students echoed these sentiments, one stating that while they appreciated the “bones” of Pei, there has been a lack of maintenance for the buildings. Another student expressed that the school seems to have “given up on Pei” entirely.

More students commented on the physical gap between students and faculty on campus—”There’s literally a bridge between us.” Brain sympathized with these comments, adding that the Four Winds Cafe did once provide a social space for both faculty and students to mingle in. However, Okker explained during the Town Meeting that the reopening of the Four Winds is happening independent of the New College Challenge, and is still scheduled for Fall 2022 while other New College Challenge renovations are set to happen much later.

Much of the New College Challenge is still quite elusive, and many questions remain unanswered at this time. However, a strong undercurrent of hope runs through each of the foundational members, and the varying opportunities for students to get involved shows promise. Ruiz highlighted during the Town Meeting how this hope holds the potential to bring the community together under a united New College experience.

“When you walk on this campus, when this vision is starting to be realized, you won’t have to explain it,” Ruiz theorized. “You’ll experience it. And for those of you who are practical or who want more details and think this sounds a little airy-fairy, I just want to validate your feelings and say, let’s trust the process.”