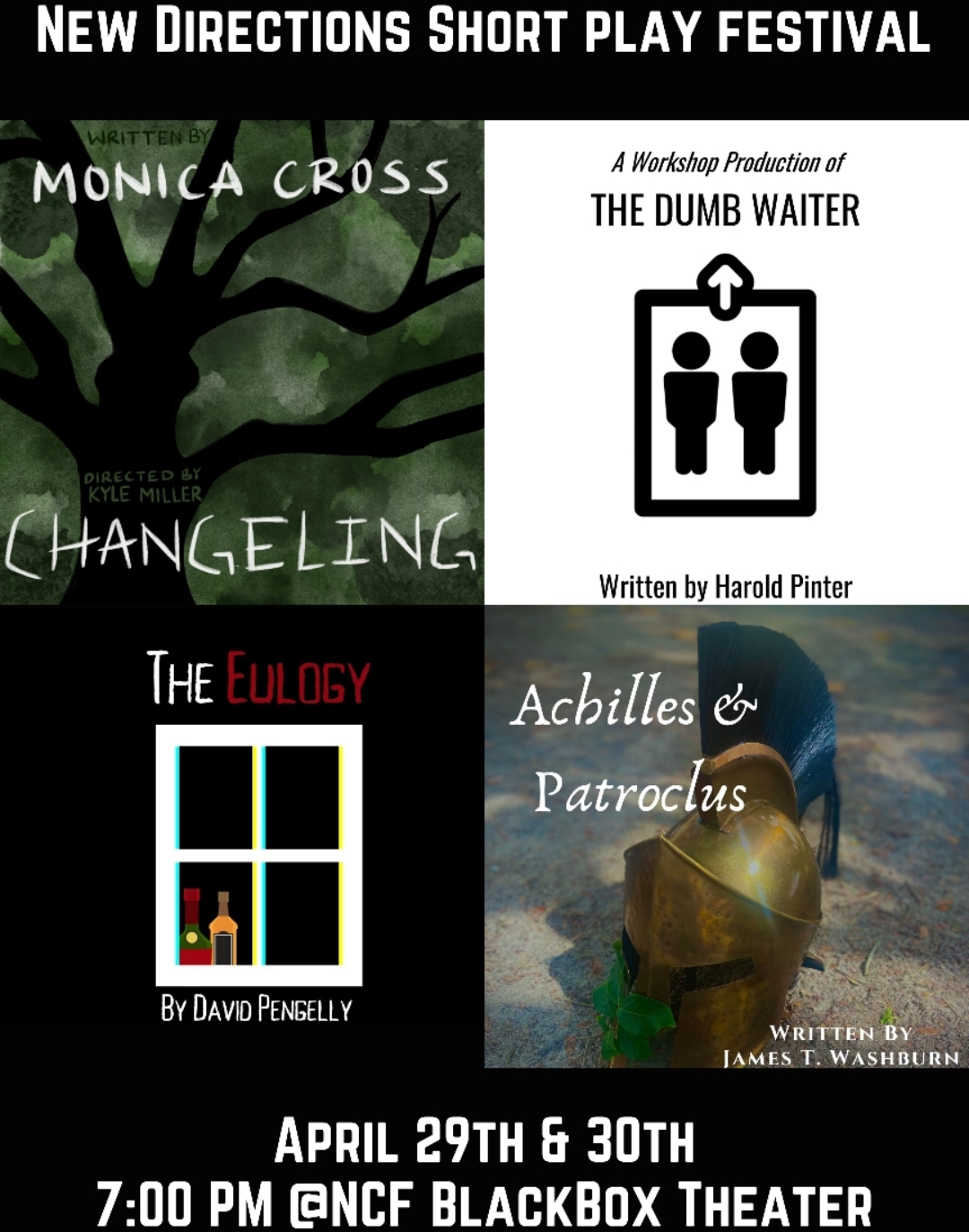 The four New Directions short plays will be shown in the Black Box Theater on Apr. 29 and 30 at 7:00. Photo courtesy of Cooper Smalley. Posters designed by Kyle Miller, K.C. Casey, Cooper Smalley and Pluto Boll.

New College’s Theater, Dance and Performance Studies (TDPS) program usually offers four shows each academic year: one fall and one spring theatrical production, one dance performance piece and an Independent Study Project (ISP) show. This semester, however, is noticeably different. Instead of a full-fledged faculty-sponsored show, alumni Logan Gabrielle Schulmn (‘17) and Raychel Ceciro (‘18) have organized a performance of The Fog to be performed in multiple locations in Sarasota. However, this semester has also featured even more performance opportunities: this time, entirely student-run and located on campus, and with a focus on directing—a position that interested New College students are not usually given the chance to fill. Brought to you by the same people who have been hosting the “No Shame, New College” open mic events, New College’s student-run Windmill Theater Company is hosting the New Directions Short Play Festival.

This year’s New Directions is a collection of four one-act plays ranging from approximately 10 to 30 minutes in length each, all directed by New College students. The four plays being performed are The Eulogy by David Pengelly, Changeling by alum Monica Cross (‘10), Achilles & Patroclus by James T. Washburn and The Dumb Waiter by Harold Pinter.

“I don’t think students are really encouraged to do that [direct] as much as they could be, and especially not first-time directors,” Boll said. “We wanted to give students who would maybe never pursue this as a career to direct. An opportunity for more than just acting, for taking a leadership role.”

Boll first stepped into the role of Secretary in Fall 2019, but the Windmill Theater Company shortly thereafter fell apart once campus was shut down during the onset of the coronavirus pandemic. Because of this, a new board had never been reinstated for the 2020-2021 academic year, or for the Fall 2021 semester. It wasn’t until the 2021-2022 ISP that Boll took matters into their own hands by organizing emergency elections to have Windmill formally back on its feet this semester.

“I just got everybody together and started doing stuff like taking notes again and minutes and the stuff a secretary does, except I think it’s like ‘secretary elevated’ now,” Boll elaborated. “I’ve been kind of in charge of making sure that things happen with the club. We have a full board now, but being the most experienced person on the board, I’ve kind of taken a few more roles this semester. I organize things, I propose events and make sure that everybody has the tools that they need to be able to continue Windmill once I’m gone.”

“We thought that this would be the perfect time for Windmill to come back into the picture, just because there wouldn’t be a spring show,” Windmill Treasurer, director of The Eulogy and third-year Cooper Smalley said.

With Assistant Professor of Theater and Performance Studies Diego Villada on leave this semester and no other faculty able to step in on such short notice, Windmill was able to step into the spotlight.

“We were lucky that Windmill, a couple of years ago, did have some money left in its budget,” Smalley continued. “Since it had been inactive for two years, we were still able to use what is left in that. We have that, and we weren’t able to get any money from TDPS, but we were able to get some of our props provided by the Student Allocations Committee (SAC). The help from SAC has been very integral to putting this up.”

Smalley continued to say that a faculty-sponsored and guest directed show was meant to occur this spring, but that the guest director was unable to continue with the project. While TDPS did have funds prepared for this production, they were redistributed to other shows and New Directions was not able to access them.

“Our intent was never to fill the gap [of the absent spring show],” Windmill Membership Coordinator, Changeling director and second-year Kyle Miller clarified. “We would have done New Directions or something like it even if the spring show had happened. We have also been trying to revamp Windmill. We can never do anything that’s as big as something that the faculty will be able to accomplish, but I am very glad that we got to do it this year when there wasn’t a spring show, to give more acting opportunities.”

The primary appeal of New Directions is that it invites students to assume a directorial role where it is otherwise limited in the TDPS curriculum. This makes events like New Directions especially important for students like third-year K.C. Casey, who is directing The Dumb Waiter.

“I came to New College interested in directing, having done it fairly frequently in high school,” Casey said. “But at New College, the theater program is a generalist program, which means they kind of want you to get a bit of everything. But in discussions with my advisor Diego Villada and Timothy O’Donnell, I told them about my interest in directing and they were very helpful in enlightening me to different opportunities. Because at New College, even though there’s a focus in all departments on doing lots of different things, if you want to follow a specific track that might not exist, you can kind of create it on your own.”

Casey has extensive directing experience, both through participation in a specially-made directing tutorial with Villada, and from being Assistant Director for the Spring 2021 production of Carrie: the Musical and for the Fall 2021 production of Mr. Burns: A Post-Electric Play. However, New Directions also provides opportunities for students without a directorial career on the periphery, or for those who have only ever been on the receiving end of a director’s notes.

“My main goal with TDPS is to be a performer, but I kind of realized that New Directions would provide the perfect opportunity for me to try directing,” Smalley said. “But since I’m doing a one-man show it kind of lets me do the best of both worlds.”

Smalley is directing and starring in The Eulogy, a one-man show about Seesaw, “a clown-like entity who is the watcher of bad,” whose existence consists of witnessing every awful thing humankind does and wishing to instead see some of the good of humanity.

“I picked this show because, as an actor, I feel like I’ve always found my strength in over-the-top comedy,” Smalley said. “Whereas this is not a comedy but it still [has] lots of emotion and lots of over-the-topness. I almost saw this as an acting and directing exercise.”

Smalley has also been working with second-year Emma “Emy” McGuire as an Assistant Director, and said that “I don’t know if I could do it without a second pair of eyes.”

This is also Miller’s first foray into directing, and they say that they chose Changeling based on an interest in folk theater and contemporary folk tales. The play tells the story of a lost mother wandering the forest and in desperate want of a child.

“She comes into this forest and she sees a man, and this man is very blunt, very harsh, and soon she finds out that he is actually the lost child she has been looking for,” Miller explained. “It is a story of family rejection and expectations. It’s a story of trying to find a middle ground with someone who has very different ideas and beliefs from you.”

“It was really hard at first, trying to facilitate conversations about something is really hard,” Miller elaborated with a laugh. “Honestly, it made me think a lot about our professors, a lot of literature classes and discussion seminary classes. They facilitate conversations and try to get us to think more about things, and it’s really hard to get other people to think about things that you want them to think about without telling them to think about them. You kind of just have to guide them and hope that they get to a point where they understand the characters and the story that is their own way, but also make sure that they’re getting the essential points of, ‘This is what this play should tell the audience.’”

Achilles & Patroclus is also Boll’s directorial debut, and is a show focused on the romance between the aforementioned Greek legendary figures, with scenes interspersed from their carefree childhood into a war-torn adulthood.

“This is so scary, it’s been the most terrifying thing I’ve ever done,” Boll later continued, referring to directing for the first time. “And I have this thing that if it scares you then it’s worth doing. But yeah, I think that rang pretty true for this. I’ve had a really great time, it’s an amazing cast. I really enjoy fight choreography, I was really scared about that, and it’s been both my biggest challenge and my biggest triumph in this process.”

And finally, The Dumb Waiter—as Casey tells it—is an absurdist play about two hitmen sitting in a basement, “talking about nonsense as a dumb waiter—a little food elevator—delivers them food orders.”

“I love absurdist theater, I think its origins are very interesting,” Casey said. “It has a certain sense of philosophical depth that I find very interesting. A lot of absurdist plays are like two people, in a room, ‘waiting for Godot.’ But this one also has a very crucial theme of social and political messaging behind it about people and their response to authority. It also has commentary on class conflict, and I find myself very connected with those issues. So it kind of wraps up a lot of things I enjoy, both in terms of theater and in terms of social messages.”

“Since this is a club-run thing, we’re kind of doing it all on our own,” Casey continued. “And there are a lot of challenges that come with that, a lot of expectations that need to be met. And also, I feel like this is talked about in every article, but making it during a time of COVID-19. We’ve had three different illnesses among cast members, we’ve had cast member changes, so despite all of that, the fact that we’re able to create live theater at this college is very exciting and I hope people come to see the show.”

The New Directions Short Play Festival will be on Apr. 29 and 30 in the Black Box Theater (BBT) at 7 p.m. All four shows will be shown together on both nights, with five-minute intermissions in between each one.

“Because we’re such a small program, everything is kind of actor-centric,” Smalley explained. “So yes, the acting is an integral part of the show, but this was made as an opportunity for people who have always wanted to try directing to try directing their own show. I think it’s a really good opportunity for them, and for actors to work with student directors. I think it’s a very unique event for New College.”

Additionally, students that are interested in becoming further involved with student-led theater initiatives are invited to attend weekly Windmill board meetings, which are open to the public. These meetings are every Friday at 6 p.m. in the BBT unless otherwise stated.

“It’s usually kind of an open forum for you to bring any ideas you have to the board,” Boll said. “We’re always looking for new events, and if you see a gap in where there could be an opportunity for someone like you or someone you know, you should fill it. You should come out and tell us and work with us, and we’ll work with you.”

Editor in Chief Sophia Brown is also an actor participating in New Directions.