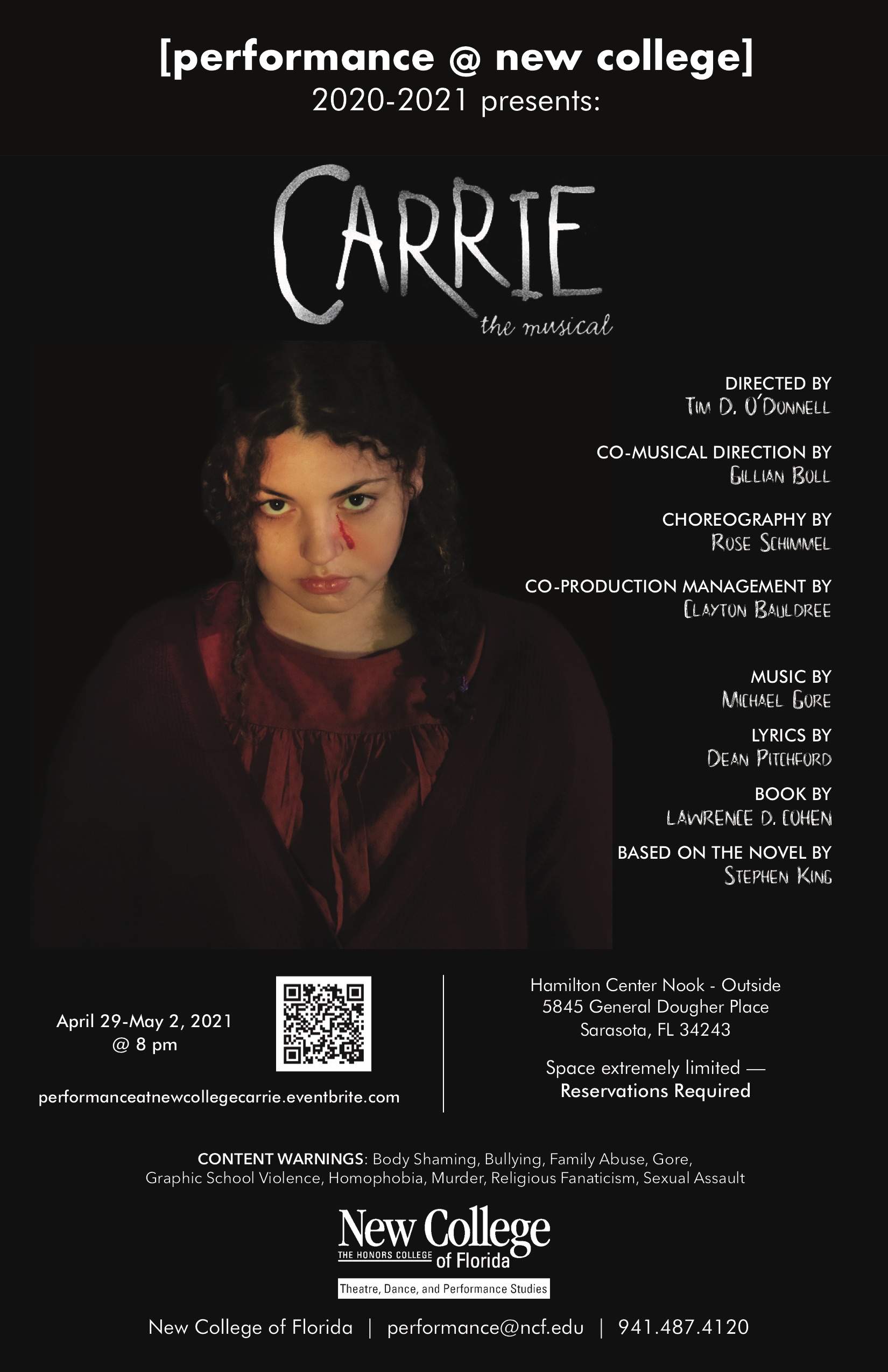 The poster for the production, courtesy of TDPS.

Anyone looking to enjoy musical theater while also staying socially distanced is in luck this spring. New College Theatre and Dance and Performance Studies is currently producing the musical Carrie by Lawerence D. Cohen. This show is the first musical NCF has put on in over ten years. The show will officially open on Thursday, April 29 and run through Sunday, May 2.   Based on the novel of the same name written by horror writer Stephen King, Carrie tells the story of Carrie White, a 16 year-old girl who discovers she has telekinetic powers while living with her abusive, Christian mother.

Quality along with safety is top priority. With adherence to COVID restriction guidelines as a chief concern of director Tim O’Donnell and co-artistic director and fight choreographer Diego Villada, they have implemented a diverse host of techniques to maintain COVID safe environment for both the cast and crew.

“We have maintained the social distance capacity that was assigned to the Black Box Theatre (BBT) at the start of the year,” O’Donnell said. “We rehearse with all of the doors to the BBT open to allow for ventilation. We also have a garage door attached to the theatre’s scene shop that is opened for all rehearsals with a mosquito net. We have wipes in the room to wipe down stations. Before each rehearsal, props, the piano, etc., are wiped down before use. And every time we change activities, the stage manager will go around the room and put hand sanitizer on everyone’s hands.”

In addition to this, audience members can expect a safe showing as several methods will be used to ensure social distancing between members of the audience.

“With the help of a system created by Student Activities and Campus Engagement(SA[U]CE), the audience will consist of painted circles on the ground (think football lines on grass), and each pod will be allowed to have two people in them max,” O’Donnell explained. “So when someone makes a reservation for a circle, they are either making a reservation for themselves or for two people. The theatre will provide chairs, but people are encouraged to bring their own if they’d like or even sit on the ground!”

Carrie has something for everyone, boasting an enjoyable soundtrack and morally ambiguous characters in addition to a recreation of the infamous blood-bucket scene. O’Donnell believes that everyone can find something they relate to in this story.

“I think at the heart of it, the show speaks to anyone who has ever felt ‘othered,’ O’Donnell said. “It can be clear why some characters in the play appear this way, but as you dive deeper, you find out that everyone is struggling with something. Everyone is looking to be understood and looking to be accepted for who they are. I think that’s something that every single person can speak to in their own experience in some way. Sometimes that works out and sometimes it goes horribly wrong. But either way, what does it cost to be kind to someone?”

Everyone in the cast and crew have poured countless hours into the production and theatergoers can come expecting a high-quality performance.

Tickets are expected to be free and will be up for sale starting April 7th. The Carrie team is very eager to give everyone a night they will never forget.