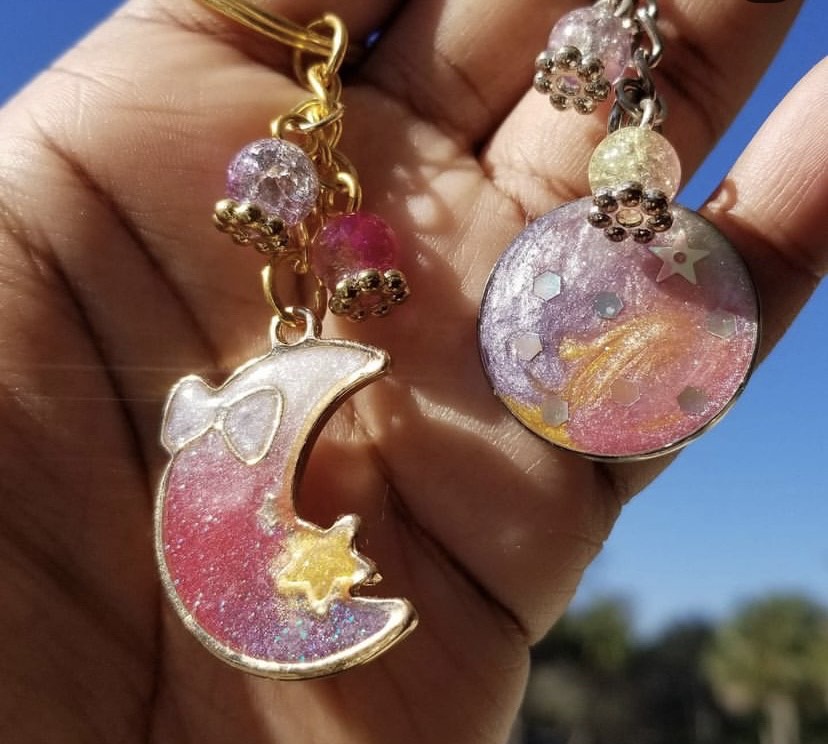 The growth of e-commerce platforms has allowed local artists and jewelry makers to easily sell their products online. From gaming merchandise to customized jewelry, New College students have found success selling their artisanal goods on Etsy, a global online marketplace, from the comfort of their homes and dorm rooms.

First-year Audrey Dixon started her Etsy shop, EserealsBagOfHolding when she began creating her own personalized dicebags for Dungeons and Dragons, a fantasy role-playing game, with fellow friends at New College. Dixon uses various dragon-themed and watercolor fabric for her “Bags of Holding ” which references a magical knapsack that opens to an extradimensional space in the game.

However, the shop is not limited to Dungeon and Dragons. Dixon indicated that the dice bags can be used for other role-playing games or to hold small belongings such as crystals and essential oils. Although she usually played Dungeon and Dragons at New College, most of her buyers trace back to her TikTok fanbase.

“It’s mostly people I don’t know who have been buying them,” Dixon said.

Dixon’s first TikTok video marketed her bags in a cheesy early 2000’s infomercial-style, garnering a mass Dungeon and Dragons internet following that instantly streamlined into her Etsy shop. Dixon’s first Etsy shop that sold more general items, such as jewelry, was not as lucrative.

“If I were selling things related to Harry Styles, then I can put Harry Styles in all my videos and hashtag it, and it would reach that audience,” Dixon said. “So, I think I have had success doing that, specifying it to a certain community.”

Former New College student Jessica Smathers, who left New College after her first year due to financial reasons, took Kendall Southworth (‘17), a recent graduate of New College, under her wing when she created her Etsy shop, LALALOME. Both bonded over using their freetime to refine their artmaking at the beginning of the pandemic. Smathers encouraged Southworth to monetize her paintings and assisted in navigating the backlog of the Etsy site.

LALALOME consists of prints of trippy concentric rings, bright-colored portraits and psychedelic interpretations of banyan trees. Southworth took about a year to completely learn the printmaking process, but now she faces the pressures and obligations of online marketing.

“I’ve noticed everything is geared towards rapid content creation when scrolling through Instagram.” Southworth said.“What is going to make people click, regardless or not if they are conscious of clicking — they feed off our digital habits. It’s effective for the market but ineffective for artists who value the creative process.”

She tries not to pay much attention to the demands of being a small-business owner. Southworth plans on listing other goods she has been creating such as resin molds of grinders and bookmarks.

Like many service workers, Smathers had lost her catering job in Sarasota due to the coronavirus pandemic.  After spending months of teaching herself hand braiding, Smathers impulsively decided to sell her clothes as a side job. She put up the site in a matter of a day. HeadyMamaWookShop is filled with a variety of slit-weaved clothing accessories and bodysuits. She immediately received sales and soon enough it became her primary mode of income.

The oracular allure of the EDM community is continual inspiration for Smathers and Southworth’s Etsy shops. They were immediately in awe of the liberating vivacity of New College folk who introduced them to the rave scene.

‘Wook is an ironic term used in festivals to describe hippies.” Southworth explained. “Someone really deep in the festival scene is definitely a basshead, probably does a lot of ketamine, a stereotypical festival kid.”

After leaving New College, Smathers attended less and less music events as a guest and started putting back into the community, working security and vending.

“Before this I worked in male-dominated work environments,” Smathers said. “Security, side ops, construction. Festival work is a men’s game. I feel like I have grappled with my employment life with being a woman and it’s really dope to have built this for myself and to know I’m succeeding.”

The slit-weaving process is laborious and inconsistent. It is difficult for Smathers to duplicate certain pieces since 40% of sales are custom orders, but she is getting comfortable with the uniqueness of each piece she weaves. When Smathers first started her shop, she used  clothing from Goodwill to hand-dye and reverse dye, allowing herself to make distinct dresses and arm gloves.

As the demand of the shop grew, she started buying full-length bodysuits — now her most popular item —from a sustainable wholesale Ohio factory. The sepia-toned material that Smathers uses, unlike synthetic fibers like polyester, is flame-resistant which keeps fire spinners safe from clothes melting on to the skin.

Smathers hopes to further expand her shop in person as a vendor once festivals and concerts are completely safe to attend. In the meantime, Smathers is continuing to upkeep her online shop and strengthen her textile business.

The intimate connections that keep artisanal businesses flourishing extend to third-year student Kyla Hunter and her mother, Personnia Hunter’s, Etsy shop, 3T Factory, which stands for “Treasures, Things and Thingamabobs.” Hunter was her mother’s right-hand person when she began to take up beaded jewelry to sell for friends and family in 2015 but Hunter wanted to take the small-scale project to the next level.

By 2019 Hunter went from her mom’s “little-helper” to handling administrative tasks: handling the listings, marketing through social media and creating video content. The shop specializes in resin charms, keychains, jewelry and tumblers of different themes and sparkly colors. People addicted to anything glitter can purchase strawberry to kitten shaped ornaments. Buyers can see the different tastes between Personnia and Kyla’s interests on the site.

“There is a lot of trial and error,” Hunter said. “Resin has a mind of its own.”

Hunter is not one to make the potential setbacks of craft-making a secret. In fact, she completely embraces it.

Hunter takes advantage of when she is home now that she lives on campus. Hunter makes sure to film as much material as possible so there is a steady flow of content for their social media accounts.

They plan to sell merchandise from 3T at NewFest and hopefully create some Carrie inspired tumblers or water bottles in celebration of New College’s highly anticipated musical.

“There will be a lot of blood!”