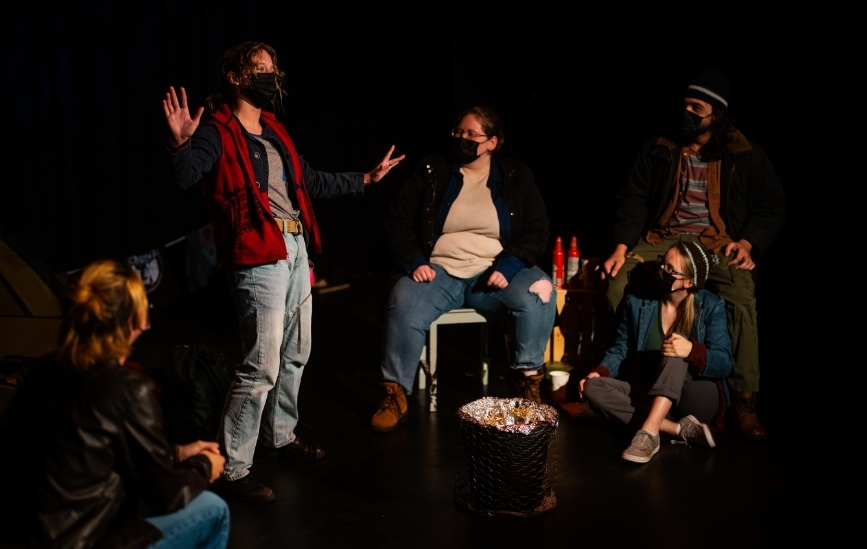 Since the start of the pandemic, the Performance at New College (PANC) production company has had to undergo several changes in order to put on its shows safely. In spring 2020, PANC staged a production of Carrie: the Musical, which stood out as different from the company’s past performances because of the aforementioned changes. The usual home to these productions, the Black Box Theater (BBT), was not used for this play. Instead, PANC chose to move the show outdoors, deciding on the Nook as the perfect venue. Now, in fall 2021, with the increase in vaccinations and decreased presence of COVID-19 on campus, PANC’s production of Mr. Burns: A Post-Electric Play was able to look a little bit more like the company’s shows used to.

“For Mr. Burns, the only difference we had for the performance due to COVID was that the actors and audience wore masks,” Production Manager and Technical Director of the BBT Tim O’Donnell said. “Other than that, we had everything back to the way we had things before spring of last year.”

This fall’s PANC performance marked a return to the BBT and a new normal for the company. The show featured multiple deviations from some of the safety protocols put in place last year.

“When we were doing Carrie, aside from wearing masks and having it outdoors, we also emphasized that actors should not put themselves at risk by touching each other,” O’Donnell mentioned. “With Mr. Burns, we were able to be more lenient in areas like that one.”

While these changes were a return to the past for some, many members of PANC were experiencing fundamental aspects of the company’s history for their first time.

“Most of the students involved in Mr. Burns had never done a show inside the theater before,” O’Donnell said. “There was an interesting learning curve for those that hadn’t had the chance to perform in the BBT yet.”

Despite the BBT being PANC’s primary home for years now, Mr. Burns forced its members to reintroduce themselves to the many aspects of the modest theater.

“The biggest obstacle to coming back inside was remembering how to put on a show when you have all the materials,” O’Donnell said. “When we did Carrie outside, we had to figure out how to take the elements of the theater outside and make them work. With sound and lighting indoors, there’s much more to juggle… I had to reteach myself how to do a show inside.”

“I think the issue we ran into when working in the space was that the BBT was not designed to be a theater,” third-year and Assistant Director of Mr. Burns K.C. Casey said. “It was a conference room that was built into a theater. It causes some issues for sound design, specifically. We had a lot of issues with our sound system a few days before the show opened. It was pretty scary for the show because there are certain parts of the show that wouldn’t have been possible without the system.”

Furthermore, PANC was also glad to introduce a brand-new component to its performances: live music. For the third act of Mr. Burns, the actors found themselves accompanied by a band composed of student musicians, including instruments such as piano, drums and guitar.

“The sound designer was really confident that we could do live music,” O’Donnell shared. “We were able to find musicians and it was a really great collaboration moment. We got to see exactly what is possible when doing theater here.”

“I thought it was really cool,” Casey said, who also played guitar for the play. “I never played with a live band before, so I really appreciated the experience. Seeing us be able to produce something of that quality was really exciting. It felt like a very big spectacle, which felt like it fit well with the show. It also shows how we’re growing as a theater department. Having live performances really creates a special element of immersion.”

Following months of preparation and rehearsal, Mr. Burns concluded its five-show run on Oct. 24. Looking ahead to the future of PANC, O’Donnell was enthusiastic and optimistic.

“Come and see the New College theater program!” O’Donnell concluded. “We’re trying to do three-to-four shows each year, and like all things New College, we want to react to the things that students are passionate about. Let us know what you think!”