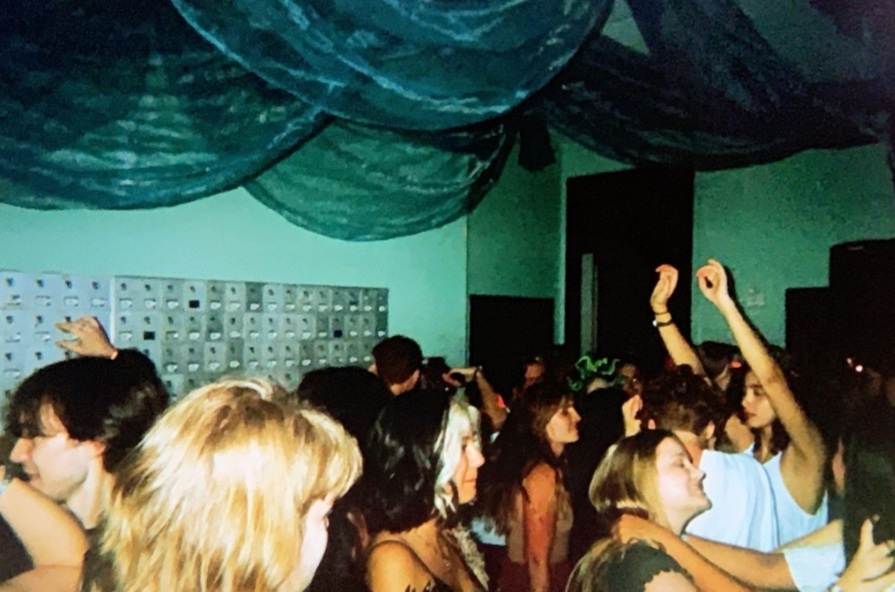 Students partying, indoors and maskless, at the February 2020 COUP before COVID-19 surged through the nation. Photo courtesy of Madi Markham.

Center of the Universe Parties (COUPs) are a New College tradition that were, like many other social gatherings, restricted due to COVID-19. COUPs are campus-wide events that involve hundreds of people, and are organized and funded by the New College Student Alliance (NCSA). These parties are the largest events on campus all year and are, in part, defined by the widespread attendance of guests, something that was wholly disallowed last year. One benefit of last year’s policy was the absence of a police presence, substituted solely with Student Affairs staff, as fewer numbers meant lighter security. This year, however, both the guest policy and police presence for COUP are currently up in the air.

COUPs take place across several spots around campus, which have changed slightly throughout the years. More recent examples include Palm Court, the Z Dorm amphitheater, Z Green and the Nook, although last year all COUP activities took place outdoors in a COVID-19 precautionary measure. COUPs also stand out as a piece of New College student culture for their themes—with cyberfuturism being the most recent one—, complete with decorations across the residential side of campus and many students dressing to fit the theme. The parties generally last from around 9 p.m. to 2 or 3 a.m., and night owls would sometimes finish the evening by going to watch the sunrise at the bayfront, according to third-year Madi Markham.

Before the pandemic, students were allowed to bring two guests each. According to Assistant Director of Student Activities and Campus Engagement (SAuCE) Jada McNeill, as with everyone on campus when COUP is happening, these guests needed to have on wristbands to signify that they had been approved to be on campus. Additionally, each student would be accountable for their guests during COUP.

Bringing guests was free, but, as stated by NCSA President Sofia Lombardi, students had to register their guests and pick up wristbands from designated locations prior to the event.

Last year, the guest policy stated that guests were either not allowed on campus at all, or were strictly selected with the submission of a negative COVID-19 test result. Third-year Michael Bolesh remembers the time unfavorably.

“I remember stories, like ‘So and so’s family was here the other day and nobody said anything,’” Bolesh said. “But then someone would have like one person visit in their room and it would be a fiasco almost. They would restrict and relax and it kinda seemed like you never knew when they were actually going to enforce [it]. They were really vague, it was kind of absurd.”

“The guest policy has not been amended this year,” Vice President of Student Affairs S. Marjorie Thomas said.  “While we are expecting students—and all community members—to be mindful of safe practices to minimize the spread of COVID-19, we are not prohibiting students from inviting or having guests on campus. We have, however, asked students to support our efforts by having their guests follow our guidance and expectations.”

Additionally, Thomas confirmed that she did not know how the guest policy would look for COUP, but said that it would “likely be predicated on updates to current COVID-19 Response guidance.”

While rates of COVID-19 positive test rates and new cases in Florida have trended down since the semester began, levels are still dangerously high with the seven-day rolling average for new cases at 410 as of Sept. 8, according to the New York Times. This rolling average is more that 20 times higher than it was in June 2021, when it hovered around 15 to 20 new cases a day. For this reason, concerns are high, as made apparent by the student reaction to the Hamilton “Ham” Center restrictions, high levels of mask participation and the continued offering of free testing outside of the Sudakoff Conference Center on Tuesdays.

However, many students and especially third-years and thesis students are hopeful of more traditions returning, much like Walls did on Friday, Sept. 10.

“I think it’s really nice seeing student life coming back,” Markham said about the return of Walls. “Things are never going to be the same, but it feels like a warm welcome for a lot of us. Especially upperclassmen, but hopefully underclassmen too—just back to the things we enjoy about New College outside of the academics.”

COUPs are also of great value to Novos, highlighted by the fact that they were “one of the most well-attended events, provided the situation” last year, according to former Vice President of Student Affairs Saloanne Labh.

In recent years, even before the coronavirus pandemic, COUPs being fully-funded by the NCSA has led to an issue where “[Student Affairs has] demanded [expensive] security,” according to Markham.

“That money doesn’t come from the college,” Markham said. “It comes from the [NCSA], so they make the students pay for that and it’s actually shrunk the funding for COUP.”

Whether or not there is a police presence is not solely up to the NCSA, but the student government has made efforts to reduce it in the past few years.

“The NCSA, at least since I’ve been here, have worked to make incremental changes in reducing the police presence at COUP and changing how the event is being policed, like not having cops directly outside of the ‘cool-down room’ in HCL 7,” Markham said.

Markham also stated that most of this progress was made by Lombardi and former Vice Presidents of Diversity and Inclusion Rocío Ramírez Castro and Chloe Fodor.

The final decision will be ultimately, reached in conjunction with SAuCE and Student Affairs.

“This year, it is too far out for me to determine what policies will be in place, given the rise of the Delta variant and heightened campus safety concerns,” Lombardi said about upcoming COUP events this Halloween. “I will continue to engage in conversations with NCSA staff, SAuCE staff, and Dean of Student Affairs S. Marjorie Thomas to figure out our best plan of action in the coming weeks.”

“As it relates to campus police presence at the COUPs, I am not aware of the current status of their plans for supporting COUPs, especially the one planned for Halloween,” Thomas added. “I am confident that as COUPs are planned, however, those involved will ensure that any campus police support needed will be requested.”

Despite their shared confidence that the right decision will be made, nothing has been set in stone.However, this provides the opportunity for students to influence the eventual decisions, especially in regard to the hot-button issue of police presence which has been noticeably increased on campus since the Aug. 25 break-in.