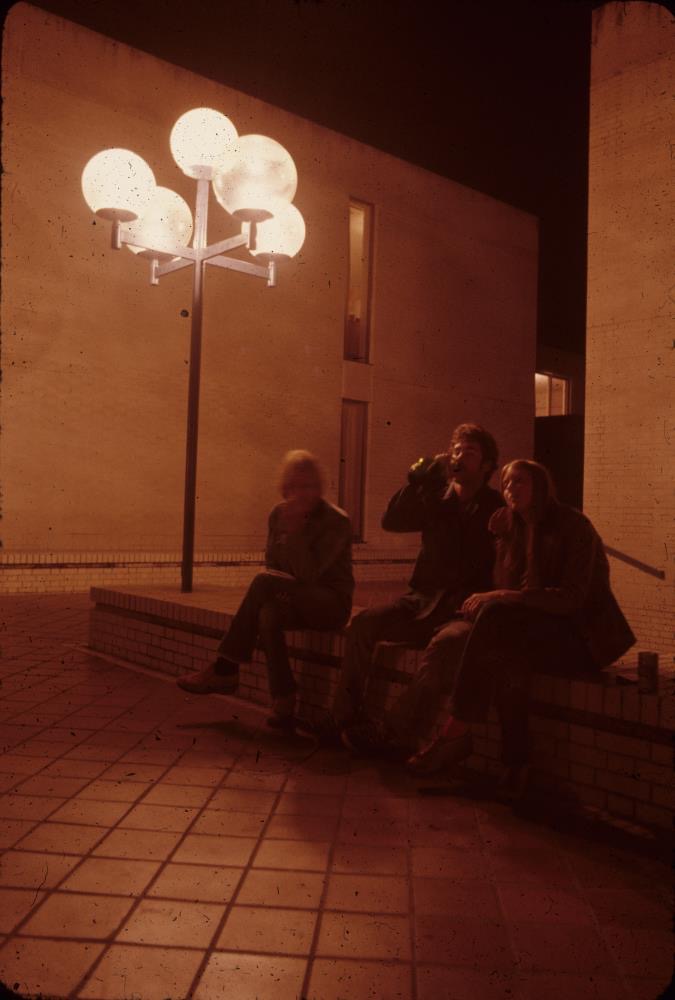 Despite recent budget cuts, the triannual Palm Court Party (PCP), also known as the Center of the Universe Party (COUP), will take place on Friday, Nov. 1. Co-hosts and second-years Clayton Bauldree and Gillian Boll will be throwing “Cryptid COUP: a Campus of Oddities,” a night where they encourage students to turn off the lights and let the dark in.

Since 2006, the Campus Police Department (CPD) has hired additional security to patrol the perimeter and prevent outsiders from accessing campus during PCP.

The CPD currently hires G4S Secure Solutions to monitor the event. G4S also provides security guards in the library after 9:00 p.m. and is the school’s go-to company for extra security during large events. During PCP, the security officers are strategically placed around the perimeter and refer to CPD to resolve any disputes.

“They are not what we call hands-on, they’re more just our eyes and ears for the safety of the perimeter,” Sgt. Kelley Masten, who has worked at the CPD since Aug. 2010, clarified. “They are strictly just security while we are state-certified law enforcement, so we can do different things than they can do. No hands-on for them, we will handle anything that requires that.”

Masten said that even more security was present at previous parties; for this PCP, there are two less security officers and only one deputy. Three CPD officers who would have been there otherwise will not be present.

According to Masten, the New College Student Alliance (NCSA) has been paying for the outside security since it started in 2006. Starting this fiscal year, the NCSA will also be required to pay for overtime for CPD officers. Masten was not present at the negotiations and could not elaborate on the terms of that agreement.

Last year, the NCSA originally budgeted $15,000 for all three PCPs but later had to cut the budget to $10,500. Because student enrollment has decreased and is directly correlated with NCSA revenue, this year’s budget was cut to $6,000 for all three PCPs. The budget includes funding for security, decorations, bands and anything else.

To have enough money for PCP, the NSCA Executive Cabinet has discussed charging alums for admission, which was discussed at the Sept. 30 Towne Meeting. However, thesis student and Vice President of Diversity and Inclusion Alex Barbat noted that no system has been put in place yet and that it would be logistically challenging to implement for the upcoming PCP.

“We would also have to find some way to notify all the alums because I don’t want them to all show up to the Keating Center and just find out suddenly that they have [to pay],” Barbat said.

Changing locations to reduce security costs was also discussed, but Massen said that drastic changes were unfeasible for the upcoming party.

“When you have COUPs or any event that takes place in multiple different locations, that does pose more of a security concern for us,” Massen said. “Every event is looked at on an individual basis, so you have to put everything into perspective and assess it so that the safety measures aren’t compromised.”

Massen added that fencing in an area can help with reducing security costs.

“We left [the location] up to the COUP sponsors to decide where they wanted to have COUP and the choices were between Rural America [the area around the bike shop, tennis courts and softball field] and just the regular America [the usual PCP locations],” Daniels said.

Event-throwers Clayton Bauldree and Gillian Boll chose not to opt for Rural America.

“We plan on using HCL 7 as a chillout space, the bandroom, the banyan tree and hopefully Palm Court if we get approval,” Bauldree wrote in an email interview.

In their original email sent to the Forum, Bauldree and Boll wrote that the Banyan tree will be transformed into the Mothman’s nest and will feature a stage for live bands.

“We hope to get some live music to bless the beautiful ears of the Mothman,” they wrote.

The bandroom will become the Lizard Man’s Den with DJ sets and Palm Court will become an enchanted forest.

Throughout the night, Bauldree and Boll will try to keep student-police interactions peaceful.

“As we are walking through the event we hope to diffuse any situations with police calmly,” Bauldree said. “There have been a lot of unfair interactions with students lately where police have been the aggressors. By standing with students in times of conflict with campus police, we hope to dissuade any kind of aggression via the police.”

Also, despite the budget cuts, the co-sponsors hope that everyone has a good time on November 1st.

“[We] both just want people to enjoy the party we’ve put together,” Bauldree said. “There is a lot of stress on PCP hosts to make the event as rad as possible, with not a lot of thanks afterwards, and we just hope people will feel that we’ve created a sufficient place to party.”