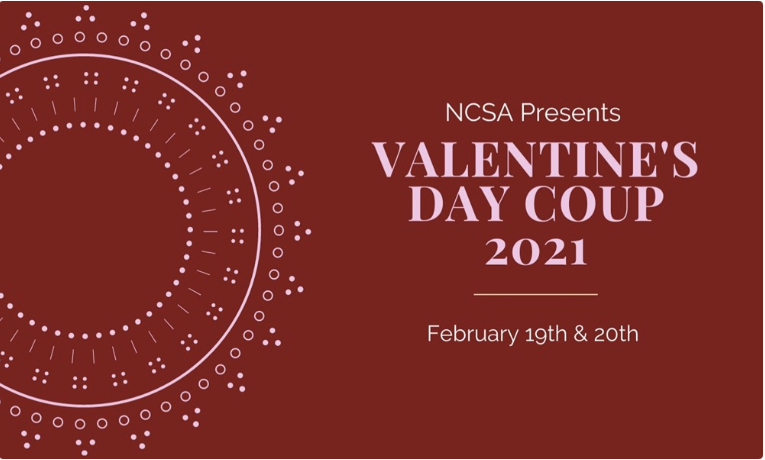 The COVID-19 pandemic has cost students much of their college experience over the past year. More than students’ classroom environments or living situations, COVID-19 has also changed how students are able to socialize on campus. This fall students attempted to find compromise between long-standing traditions and important safety regulations. One such compromise was last semester’s Halloween COUP-Vid which combined virtual and in-person elements to recreate the iconic campus-wide party on a smaller, safer scale. This semester’s Valentine’s COUP substitute will incorporate even more in-person elements, from a late night waffle bar to a series of student music sets. Organized primarily by New College Student Alliance (NCSA) President Sofia Lombardi and Vice President of Student Affairs Saloanee Labh, this spring’s COUP will further test the limits of how the New College experience can be recreated while still keeping students safe.

Lombardi and Labh first started planning for the Valentine’s COUP on Jan. 15 by emailing a Google form to current students  in order to generate ideas for in-person and virtual events. A second form was sent out on Feb. 2 where students could vote on the suggested ideas in order to further narrow them down.

“We just included all of the ideas that were included,” Labh said about the second Google form which allowed students to vote on ideas. “We decided that whatever was most feasible for us, we could incorporate into the COUP.”

The proposed events included some familiar suggestions, such as goodie bags and a Trunk or Treat-style event with Valentine’s cards, which were both staples of the fall’s Halloween celebrations. But popular suggestions also included both virtual and in-person student music sets, reminiscent of COUPs prior to the pandemic.

“A lot of people were into live music,” Labh said. “A flower bouquet-making station got a lot of votes too. There were some options that I was surprised didn’t get a lot of votes, like food trucks, but I understand that there’s COVID-19 concerns and people wouldn’t necessarily want to vote for that.”

Lombardi and Labh have both worked with Interim Dean of Students Randy Harrell and Director of Students Activities and Campus Engagement (SA[U]CE) Danielle “Dani” McCalla in order to prepare for the in-person components of this COUP, by “giving us deadlines” and “asking the practical questions,” as Labh puts it. One such preparation was moving the COUP dates from Feb. 13 and 14 to Feb. 19 and 20, both due to the poor weather predicted for Valentine’s weekend and to allow for additional time to plan.

Neither Harrell nor McCalla will be on campus during the Valentine’s COUP, however, so Labh says it will likely be her, Lombardi and NSCA Cabinet members running the events.

“If we do find that we’ll need extra student help, we’ll send out a form, especially for live music,” Labh said.

In the email detailing these events, Lombardi also said that she and Labh are working closely with COVID liaisons, thesis student Courtney Miller and second-year Oci Krasny to ensure that safety protocol is followed during these in-person events. Both Miller and Krasny will be on campus during COUP in a role that Miller compares to the “fairies” from the Fall 2019 Cryptid COUP, “just making sure everyone is being safe and having a good time.”

The in-person events of this spring’s Valentine’s COUP will include a late night waffle bar in Hamilton Center on Feb. 19 from 9 p.m. to midnight, with prepackaged food and a grab-and-go system, as well as a raffle.

“The waffles will be in microwaveable containers and the toppings will also be individually packaged,” Miller said, in regards to safety precautions for this in-person event.  “[Metz] will be providing the food.”

“We will paint socially distanced squares on Z Green with glow in the dark paint, with no more than two people per square,” Miller said.

In a situation where a student sees another student violating safety guidelines and wishes to report it, Miller invites them to approach her or Krasny directly, as opposed to using the pre-established tip line or another system.

“We don’t see the necessity of that due to the pre-planned safety measures but someone is always welcome to approach us with any concerns,” Miller said.

Despite the initial postponement and the challenges presented by safely hosting a campus-wide party, Labh said that everything—the items needed, who will be hosting which event—have all been determined and that the Valentine’s COUP is ready to go.

“I’m glad that we’ll have a little more time to organize it,” Labh said. “I have no doubt that this will be a great COUP.”