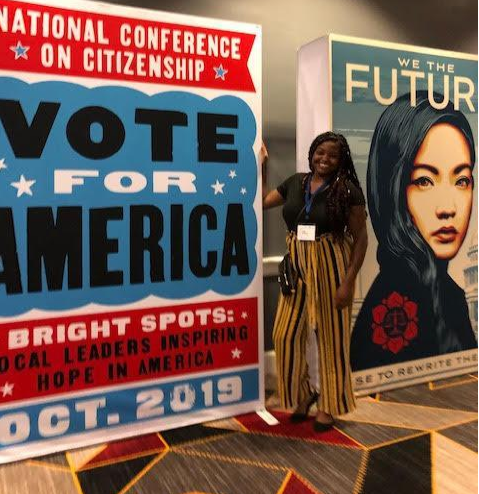 Jada McNiell at the National Conference on Citizenship in 2019. Photo courtesy of Jada McNiell.

End of September marks Associate Director of Student Activities and Campus Engagement (SAuCE), Jada McNeill’s last days at New College. During her time at New College, McNeill organized and headed many events focused on diversity and inclusion. At a predominantly white institution (PWI), McNeill’s work brought new perspectives to the table with events over the past four years such as: Drag Brunch, HERstory Panel during Women’s History Month, and the Race, Power, and Media series last October to name a few. Her work at New College was intentional and powerful, organizing events that provoke thought and action within students and faculty alike.

McNeill graduated from the University of Tennessee in Knoxville in 2014 with a Bachelor’s degree in Psychology and received her Master’s degree in Public Health from Tennessee State University in 2017. To put herself through graduate school, like many students today, McNeill worked three jobs, ultimately dropping one to place more focus on her school work and thesis.

“My efforts were really focusing on school, graduating in two years and then thinking about my next move,” McNeill declared, a sentiment felt by many current students.

The move in question was her relocation from Nashville, Tennessee to Sarasota in 2018 with AmeriCorps VISTA, a program designed to assist in alleviating poverty across the country.

“When I was going through [AmeriCorps VISTA] I saw something about food insecurity in Sarasota, Florida and at New College,” McNeill describes. “It caught my eye so I decided to apply for it to see what happens.”

New College was quick to invite her to campus and offer her a position working to mitigate the growing food insecurity issues on and off campus. McNeill’s work extended to the greater Sarasota area, including Newtown, where she connected with community leaders and worked with AmeriCorps in aiding the public.

“Jada started out working with SAUCE as the AmeriCorp Vista, so she was key in helping get the food pantry set up,” coworker and friend, Associate Director of SAuCE Lesley Nickels exclaimed. “I think Jada is leaving behind an amazing legacy in our office, on campus, and in the community!”

“The SAuCE office was going through a transition because the previous director was leaving, so there were two roles open,” explained McNeill. “I was encouraged to apply and that is how I appeared today!”

In late 2019, McNeill officially began her work as Associate Director of SAuCE. One of her first events, “Jessica’s Journey,” was held just a couple weeks before COVID-19 closed everything down.

“That one was close to me because Jessica Nabongo is the first Black woman to travel to every country in the world, and I’ve been following her journey for like four years,” McNeill reminisced. “It was really cool to bring her to campus to talk about the different stories and the different places she’s been to and being inspired in that way.”

McNeill sought to enrich and inspire New College students, seeking areas in need of diversity and inclusion. From this passion sprung multiple events, all meticulously planned with care by McNeill and the SAuCE team.

“I think about what’s happening currently, what’s trending, as well as what are some things that I have not seen at New College that I could potentially bring to campus,” recounts McNeill. “As someone who is focused on Diversity, Equity, and Inclusion (DEI), how can we fill in just some of those gaps?”

Of the many events on diversity, McNeill gushes about Diwali—the Hindu holiday—and the “Race, Power, Politics” series.

“I knew about Diwali but I didn’t know the story, so partnering with the Indian Association of Manasota, hearing the stories, with the food and the lights—it was a really fun event that I didn’t have a lot of knowledge about, but I knew I wanted to do it and to bring it to campus,” McNeill stated.

“Race, Power and Politics” was a series of events planned in October, 2020 having covered “topics such as economic inequality and injustice.”

“All of these efforts have contributed to the politically conscious climate at New College,” Abby Weingarten, Senior Editor of Communications & Marketing, states in a New College News article on the NCF website.

“It was really cool to see different community partners across the state because it was virtual, as well as outside of the state,” McNeill said, looking back on the series. “I thought “How did you hear about this?” It was a small event, like, you’re in Pittsburgh? What brought you here? That’s one event that’s really close to me.”

Support poured in from students and faculty on campus, local community members and even those out-of-state who were interested simply because of the event’s title. With so much enthusiasm surrounding McNeill’s past events, the question stands: Who will continue these events into the future?

“You all have the power to do it!” McNeill exclaims. “We love when students do these things and we want to empower you all to do that. I know our office is always there as a support to help students do that work so I’m excited for that.”

“One of the things I most admire about Jada is her natural ability to be future-thinking, so she’s done an amazing job setting up the groundwork for her signature events to continue,” Nickels raved.

The next move in McNeill’s career will be working with Students Learn Students Vote (SLSV), an organization based in Brooklyn, New York that McNeill previously used as a resource here at New College.

“[SLSV] is a large nonpartisan coalition trying to help eliminate barriers when it comes to voter engagement with higher education so I will, in a sense, still be working with New College, just in a different capacity,” explained McNeill. “They had a role open and I just looked at it and thought I’ll apply and see what happens. And I ended up getting it!”When asked about any last remarks or comments she may have, McNeill did not hesitate to urge students to engage in local elections and register to vote. Midterm elections are approaching, so visit TurboVote to assist in streamlining any assistance you need relating to voting. Also visit NCF’s civic engagement page for more information on how to get involved in elections.