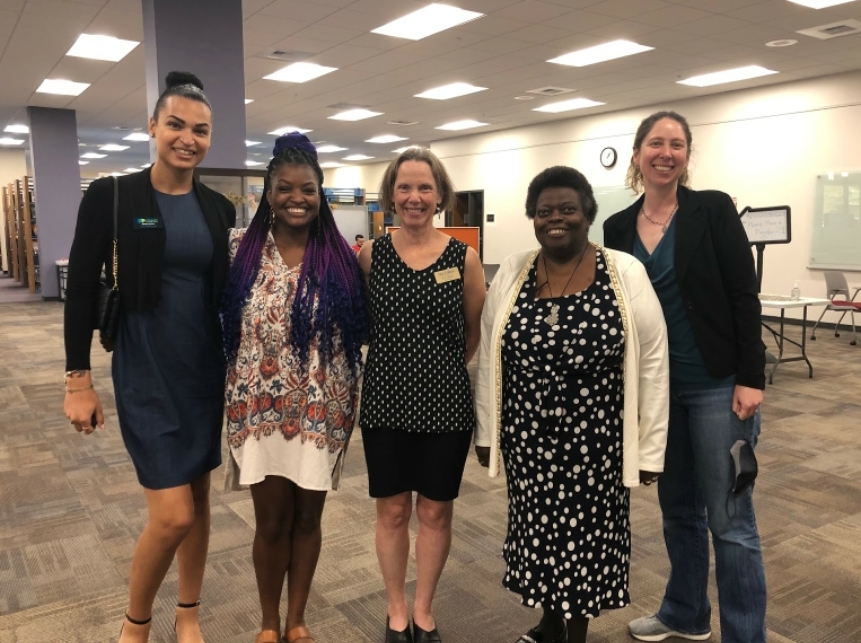 The “HERstory” panel, once a webinar, was hosted in-person for the first time on Mar. 17 in the Jane Bancroft Cook Library. Moderated by Associate Professor of Sociology and Gender Studies Emily Fairchild, the event focused on how the panelists are creating their own HERstory. President Patricia Okker, Nikole Parker from Equality Florida and Valerie Buchand from Newtown Nation shared stories of barriers to overcome and how their work has impacted their communities.

“I think really highlighting women in our community and really bringing awareness to that and just celebrating Women’s History Month is really what motivated me to do it,” Assistant Director of Civic Engagement and organizer of the panel Jada McNeill explained.

A major point when promoting the event and choosing panelists is the multigenerational aspect the panelists brought to the HERstory series.

“You get wisdom from all levels and different perspectives,” McNeill described. “That’s really what pushed me to do it, and it’s something that I’m aiming to do annually.”

Fairchild introduced the panelists then passed the mic to Parker, Director of Transgender Equality at Equality Florida, Co-Founder and Director of Operations for the Gender Advancement Project.

“In knowing that getting into social justice work, the ‘thank you’s’ are not going to come,” Parker responded when asked about the satisfaction and personal fulfillment when aiding their community. “And that’s completely fine, but for me it’s about celebrating the small wins. It’s the little things, especially after this legislative session and everything that is going on, I had to find those. You have to find those small wins and celebrate them. And for me it’s knowing that a trans kid was able to be around other trans kids because I was that trans kid that never met another.”

Buchand is a founder of Newtown Nation, President of Resident Council and Commissioner of the Housing Authority Board.

“I was asked one day to represent the residents,” .Buchand said when describing her early work in advocacy. “I said, ‘Okay,’ and I did and I’ve been doing it ever since. That was over twenty years ago. You have to love people to do what you do. We have the Newton Nation where we continue to strive and try to get the resources so that we can make an awesome difference.”

“I’ve been working with her since I got here in 2018,” McNeill said about Buchand. “Miss Val is someone I really appreciate and I’m very inspired by her. I wanted to highlight her and introduce her to New College people, for her to tell her story. So I knew I wanted Miss Val there.”

The final panelist is someone the New College community is very familiar with. Even after having been recently inaugurated on Feb. 23, Okker has become involved in a multitude of ways with students and faculty.

“The HERstory panel is something I want to happen consistently,” McNeill said. “Whatever week before spring break, that’s going to be the HERstory panel. Always recognizing women and women identifying folks who are doing really great work. Because it’s just starting, it’s in progress, but it’s something that I want to continually have to celebrate Women’s History Month.”

Digital Humanities Librarian Lena Bohman shared a list of books, poetry selections and graphic novels to compliment Women’s History Month, which can be found here. Other books are currently on display in the library, tackling subjects such as intersectionality in feminism and histories of women.

McNeill organizes a slew of other noteworthy events on campus for faculty and students, including but not limited to: “Real Talk Wednesdays” every third Wednesday of the month, “Letter Talks” focusing on gender and intersectionality and the “Race, Power” Series.

“Something else I want to do, I haven’t started this yet, but an interbelief dialogue,” McNeill shared. “Thinking about spirituality, as well as religion, and what does that look like on this campus. Bringing awareness and just giving a space for people to ask questions and participate in an authentic dialogue.”

After a successful panel discussion, McNeill’s next event in partnership with ALSO Youth, “Letter Talk: Transgender Realness,” will be on Mar. 31, marking International Transgender Visibility Day.