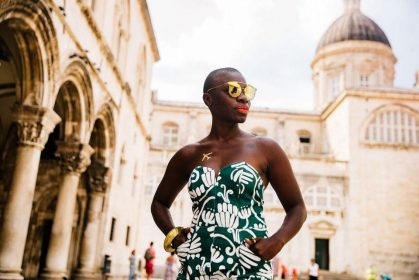 Jessica Nabongo is an entrepreneur, travel blogger, brand influencer and self-proclaimed first Black woman to visit every country in the world. On March 3, she arrived in Sarasota to give a presentation organized by the SA[u]CE office and Center for Diversity and Inclusion at Ringling College of Art and Design.

“I’m gonna talk about who I am, the journey to every country in the world, which is what everyone cares about, and what I find to be the universal truths and how to create the life you want to live, which is what I did. That’s the meat and potatoes,” Nabongo explained.

Nabongo was born in Detroit, Mich. to Ugandan parents. Her love for travel emerged early on; Nabongo had already visited seven countries by her high school graduation. After completing her undergraduate degree in English literature (with a minor in advertising) at St. John’s College, Nabongo took a six-figure job selling pharmaceuticals back in Detroit. Although she felt that she had achieved “the American dream” by landing a lucrative career and buying her own home at such a young age, the work didn’t satisfy her.

At 23, Nabongo quit her job, began renting out her condo for extra income and left to teach English in Japan. Shortly thereafter, her travel blog (@thecatchmeifyoucan) was born. Thus began Nabongo’s journey of creating the life she wanted to live, which would eventually take her to all 195 recognized UN member countries and finally New College’s Mildred Sainer Pavilion.

After a period of travel, Nabongo made a four-year pit stop in Great Britain to study International Development at the London School of Economics.

“I couldn’t get a job, despite my past work history and such an amazing institution,” Nabongo said. “I was dating a guy at the time who got an internship in Benin in West Africa, one of the poorest countries in the world. And I said, ‘I’ll just go with you.’ And so I did. We were living in rural Benin, and it was awful. We were there for six months. He was moving to rural Kenya after that, so I said, ‘I’m moving back to Europe, enjoy.’”

Nabongo went to Rome to work for the United Nations for a few years, then returned to the U.S. to work at a consulting firm in Washington, D.C.

“USAID was my client and I was absolutely miserable,” Nabongo said.

It was her first time living in America in seven years and she did not enjoy the tense political climate or the indoor office situation.

“It was my first time working in a US office space; cubicles are not my thing,” Nabongo said. “That was very difficult for me as well. I ended up quitting my job and I had to sue that company for racial discrimination—long story. And after that, I never worked for anyone else again.”

Nabongo is now a full-time travel influencer. After leaving her office job, Nabongo founded Jet Black, a “boutique travel agency” that focuses on tourism to Africa. She has since created The Catch, a “luxury lifestyle brand for that on-the-move jet-setter who wants to evoke style and sophistication as they reach their destination or for the person who just wants to bring a piece of the world home!” Her travels are funded by the proceeds from these businesses, her influencer contracts, various speaking engagements and miscellaneous hustling and the occasional GoFundMe page.

Nabongo said the impetus behind her goal of visiting every country in the world was twofold: first, she’s always been a “geography nerd.”

“I grew up with two sets of encyclopedias in my childhood home, atlases, my childhood globe, which is still in my home now,” Nabongo said. “Traveling with my family exposed me to the world and made me more curious about other cultures and countries. I always wanted to be a geography teacher, legit, but that salary wouldn’t support my lifestyle. So I let that dream go. But what I love about social media is that it’s really allowed me the opportunity to live out my teacher dream without having to do the teacher salary.”

Her second goal is to “change how people see the world.” Nabongo shows the positive side of every country she visits to challenge negative Western stereotypes. She is particularly interested in showcasing wealth in Africa, and serving as an example to others of a Black female entrepreneur and travel blogger.

“Also, the representation piece: the travel industry is very male and very white,” Nabongo said. “Oftentimes when I would see ads for travel for airlines or whatever, I didn’t see people who looked like me. And what I found particularly annoying, is when I see adverts for black and brown countries like the Caribbean, African Safari, I still don’t see people who look like me. If I do, they’re the workers. So we still have a long way to go. But I’m working every day to help change that.”

Nabongo’s “universal truths”, intended as guidelines for “manifesting the life you want to live,” are as follows:

1) Most people are basically good.

2) Most things have already been done, but they have not been done by you.

“Remember that no matter what it is you do in life, it’s special because you are doing it, and you are a unique individual,” Nabongo proclaimed.

3) Live your life unapologetically for you.

“In the words of the great philosopher Drake: YOLO.”

4) Trust the universe, it conspires in your favor.

“You have to really think about something that you want, accept it as a fact, and then release it into the universe, because the universe will carry you there.”

5) Discover what makes you happy. Find a way to fill your life with whatever it is.

8) Be honest with yourself and others, no matter how uncomfortable it makes you or the other person feel.