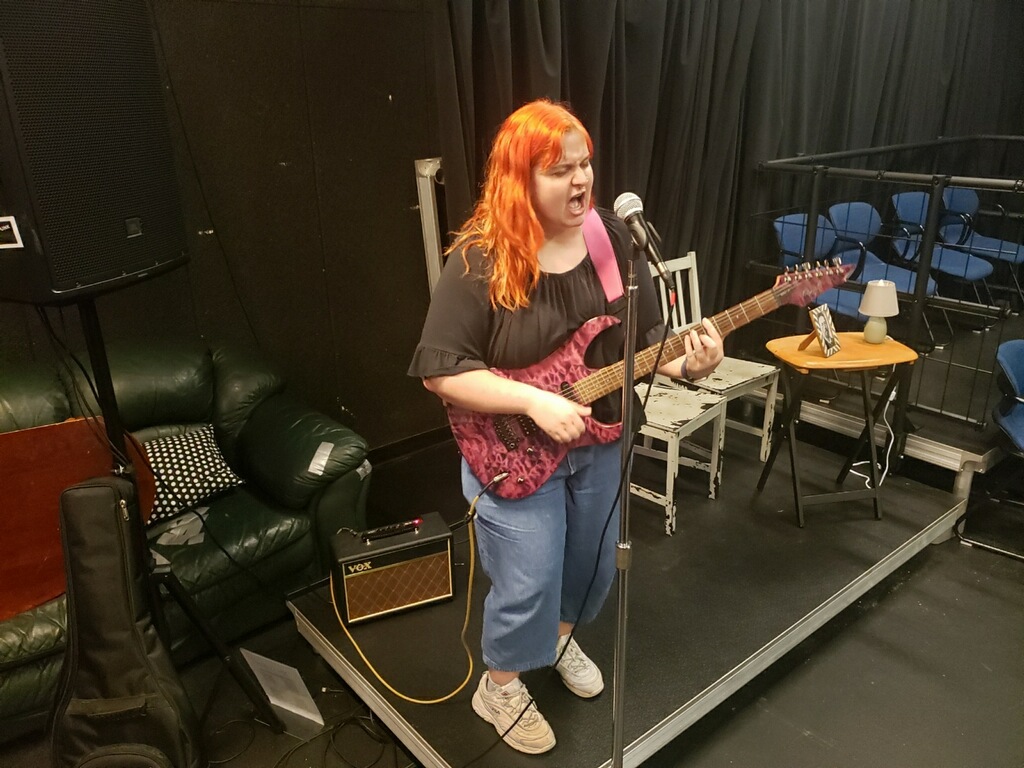 Provided one pardons the French of an old Russian play in new clothes, there’s something to be said of thesis student and director KC Casey’s rendition of Aaron Posner’s Stupid Fucking Bird—a triumph two-and-a-half years in the making—that’s managed to capture the Novo imagination. Perhaps poetically—or more appropriately, theatrically—Stupid Fucking Bird is Casey’s own curtain call to New College.

Stupid Fucking Bird is a broad-strokes satirical reimagining of Anton Chekhov’s tragicomedy The Seagull with a metatextual edge sharpened by its contemporary setting. While loaning its skeleton to The Seagull, Aaron Posner’s Stupid Fucking Bird slashes the original’s sprawling cast down to seven principle characters.

Casey is no stranger to theater production, having been previously involved in the [performance @ new college] productions of Carrie: The Musical (2021) and Mr. Burns: A Post-Electric Play (2021) as an assistant director and in The Roaring Girl (2022) and SUS: A Multi-Modal Theater Experience (2021) as an actor. Casey finally assumed the director seat for their production of Harold Pinter’s The Dumb Waiter as part of a showcase for New Colleges student-run theatre group Windmill Theatre Company.

Amidst a hectic schedule, Casey was able to provide some insight into their production of Stupid Fucking Bird. Notably, Posner’s profane Chekhov remix wasn’t even their first choice.

“I originally planned on doing a play called The Connection—which I could talk about for hours—but there were issues obtaining rights,” Casey said. “While searching for a new play, I came across Stupid Fucking Bird at the suggestion of Production Manager and Technical DirectorTim O’Donnell, and upon reading it, I felt instantly connected to the themes which pose similar questions to those that I have been asking myself as I embark upon a career in theatre.”

Stupid Fucking Bird is a play that ponders what it means to create art—one of its principle characters is a jaded playwright—connecting it thematically to the Chekhov original it borrows broadly from. Following these themes closely, Casey wants to pose questions to the audience through their production.

“Why do we attempt to create art with meaning in a seemingly meaningless world?” Casey asked. “Is there an inherent connection between seeking love in others, searching for meaning in art and a need to create? How can the rejection of artistic, social, cultural, political norms actually, actually lead to change in our world?”

However, this was hardly the end of production difficulties for Casey and their crew. After Hurricane Ian tore through Florida and commanded the pace of life for Novos and non-Novos alike, Stupid Fucking Bird was still very early in its life cycle.

“We were less than a month into our production and missing a full week of rehearsals, and the stress and various [struggles] that came out of the aftermath really threw a wrench into our process,” Casey said.

Though tested by circumstances far beyond the directorial seat, Casey claims, “[they] all have a deep passion for theater as a collaborative art form which has made the overall experience more enjoyable for everyone.”

“To be blunt, we’ve also simply put a shit ton of time and effort into this production,” Casey said. “I would also like to specifically shout out the tech crew who often goes unrecognized for the unseen work they do in theater.”

Stupid Fucking Bird is an important landmark in the campus’ history as the first official student-directed production, and a groundbreaking capstone to Casey’s career at New College.

“It truly is a culmination of all the work I’ve done here at New College academically and artistically,” Casey said. “Again, I’ve been working towards this since I came to this school and I’ve had to forge my own path to become the first student to direct a main stage production. I hope to show what I’m capable of as a director [and] I want to show that New College’s Theatre, Dance, and Performance Studies (TDPS) program—no matter how small or underfunded we are—is able to achieve great things through the profound dedication of the staff and students involved with our productions.”

Five performances of Stupid Fucking Bird will be shown in the Black Box Theatre (BBT) in the Hamilton “Ham” Center on Nov. 17 through 19 at 7:30 p.m., and Nov. 19 and 20 at 2 p.m. While free and open to the public, those interested in attending are encouraged to reserve seats online.