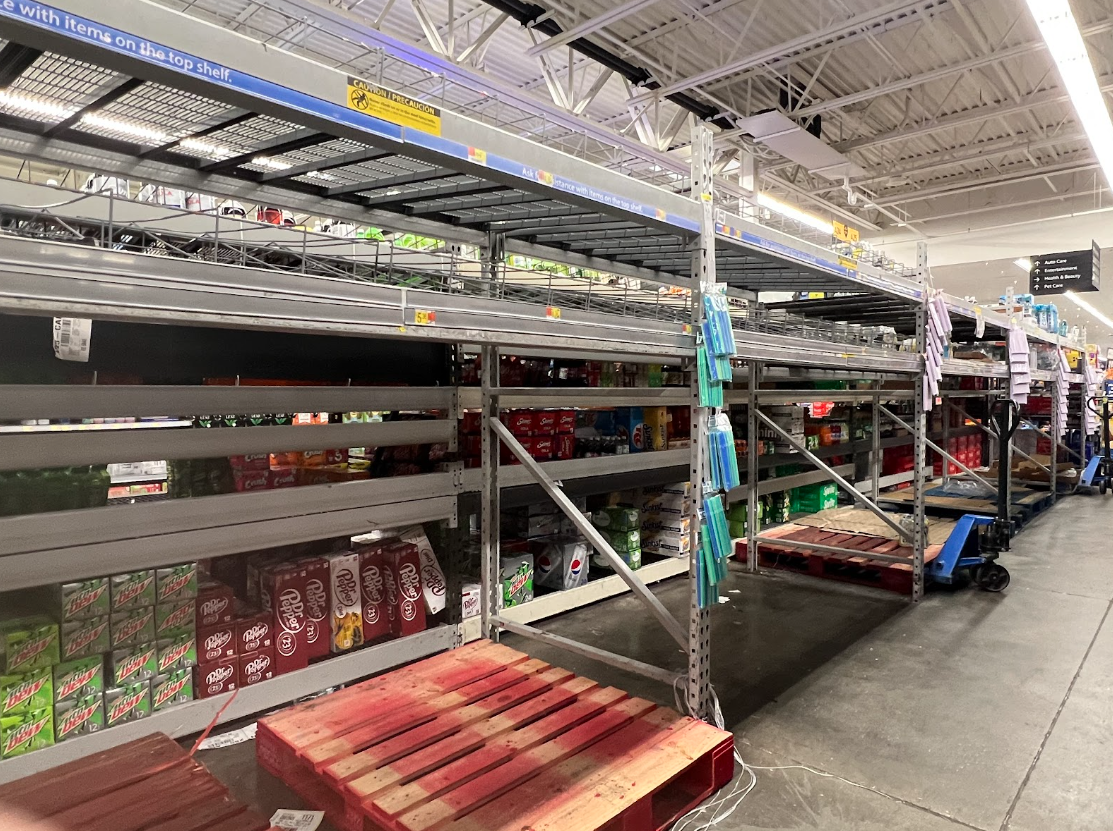 Sarasota residents bought out all the water at the Walmart on Lockwood Ridge Road on Sept. 22. (Photo taken by Christine Wehner.)

Hurricane Ian was the first major natural disaster to hit the central west coast of Florida in 70 years. Residents of the respective counties were struck with panic, as this incident was something not usually on the radar for the area. In contrast, citizens of the Florida panhandle were watching and waiting for a hurricane to hit them, only for the storm to steer away from them at a moment’s notice. In the span of 24 hours, Hurricane Ian made significant damages to central and coastal west Florida areas such as Orlando, Cape Coral and Fort Myers. Here is a summary of day-to-day projections of Hurricane Ian from Saturday, Sept. 24 to Wednesday, September 28.

As of Sept. 24, Tropical Storm Ian, previously known as Tropical Depression 9, was sitting under Cuba at maximum wind speeds up to 40 miles per hour (mph). Recently formed under the Caribbean Sea on Sept. 23, the storm was projected to become a hurricane starting on Sept. 25 and rise up to a Category 3. Its path was tracking through west Cuba on Sept. 27, predicted to swell in the Gulf of Mexico on Sept. 28, and hit Fort Myers, Sarasota and the Tampa Bay area at a Category 2 on Sept. 29. Thus, the state of Florida declared a state of emergency as forecasts of Tropical Storm Ian intensified.

Tropical Storm Ian was the first major storm to hit the Atlantic of the 2022 hurricane season. While the barometric pressure of this storm stayed at 1,003 millibars (mb) as of 4 p.m. Eastern Standard Time (EST) on Sept. 25, the warm waters of the Gulf of Mexico were predicted to push the pressure of this storm down—indicating the storm would grow stronger as the days passed. Spaghetti models of this storm showed that both Cuba and central west Florida were at major risk of wind torrent and city-wide power outages. Florida Governor Ron DeSantis took action in urging Floridians to make proper preparations to evacuate if the situation called.

As of Sept. 25, Tropical Storm Ian was expected to strengthen into a hurricane before hitting Cuba on Sept. 26 and expected to develop into a Category 3 hurricane from the morning of Sept. 27 until the night of Sept. 28. It was projected to move east towards Florida with a looming uncertainty in its strength or direction as the barometric pressure was slowly lowering to 991 mb versus the previous day’s 1,003 mb. Wind speeds rose that day from 40 to 60 mph as Tropical Storm Ian continued to accelerate with intensity.

Even though the current path of Tropical Storm Ian was not precisely defined, spaghetti models showed two possible tracks that it could take. The effects of the storm were projected to be worse for the central Florida path than the panhandle path; the storm was going to either head towards west central Florida and make landfall at a Category 3, pushing all the way up from Fort Myers to the upper Tampa Bay area, or veer westward and make landfall at the Florida panhandle at a Category 1.

For west central Florida, the counter-clockwise rotation of Tropical Storm Ian could have been guided by the jet stream to move upward into Fort Myers and plow all the way up the coast, possibly placing the remnants of the hurricane at the panhandle. Either way, the central and upper regions of Florida were expected to be hit with at least heavy rain starting on the afternoon of Sept. 28, and the panhandle had a chance of experiencing severe weather on the morning of Sept. 30.

The emerging storm in the Gulf of Mexico reached hurricane status on Sept. 26 with maximum wind speeds up to 85 mph with 105 mph r wind gusts. As barometric pressures dived down from its former 991 mb to 965 mb as of 8 p.m. EST, it was declared the new title of Hurricane Ian. The eye of the hurricane raised to a Category 2 right to the west of Cuba and was expected to quickly grow to a Category 3 in the next 24 hours.

Usually, storms in the Gulf of Mexico have a pattern of traveling up from Cuba and steering west, making landfall in either the Florida panhandle or southern Louisiana. However, a high pressure jet stream cut through the gulf and traveled northeast into the Atlantic ocean, trapping Hurricane Ian in its tracks and giving the storm plenty of time to strengthen in hot waters. Thus, it started to shift eastward into central Florida instead of westward like previous hurricanes.

There was still uncertainty at this time as to the strength in which Hurricane Ian would make landfall, depending on how slowly it would move through the Gulf of Mexico. The more likely the hurricane would travel faster, the probability of intense damages the Sarasota and Tampa Bay area would decrease.

Evacuation orders suddenly hit the Sarasota area and multiple surrounding districts early on Sept. 26. All colleges in Sarasota County canceled classes and closed business until further notice. Tampa’s Hillsborough County issued a mandatory evacuation for Zone A residents and closed schools for the week to serve as shelters starting Sept. 26 at 2 p.m. EST. Additionally, Pinellas County issued mandatory evacuations for Zones A, B and C, and anyone in mobile homes starting the same evening. Whether Hurricane Ian were to hit at a Category 1 or 3, these coastal areas prepared for intense storm surge and flooding in a panic—as Sarasota had not faced a hurricane such as this in 70 years.

Hurricane Ian impacted the west coast of Florida as of 1 p.m. EST, just a few mph shy of a Category 5 storm. The barometric pressure dropped to 935 mb with wind speeds up to 155 mph. Tampa Bay quickly reported that landlines were down across several counties, and several tornado warnings were issued in cities around the Orlando area. Millions of people were ordered to evacuate the area in  24 hours on Sept. 28.

Hurricane Ian traveled through Florida as a Category 4 and slowed to a Category 3 on Sept. 29. Impact and damages were planned to be assessed on Sept. 29 through Sept. 30. It was projected that even Orlando—an hour inland of this storm—could see up to 24inches of rain as well as a significant storm surge. The National Guard was on standby as well as medical services such as the Red Cross and incident management teams. Resources such as fuel and power companies were ready to travel downward immediately to damaged areas to restore essential supplies.

After Hurricane Ian’s dangerous path shifted through Florida, it traveled north and hit South Carolina as a Category 1. Although the storm’s intensity has drawn to an end, cities across central Florida have started to execute recovery efforts. Slowly but surely, Florida is bouncing back from the various amounts of damages that were left in its respective counties.