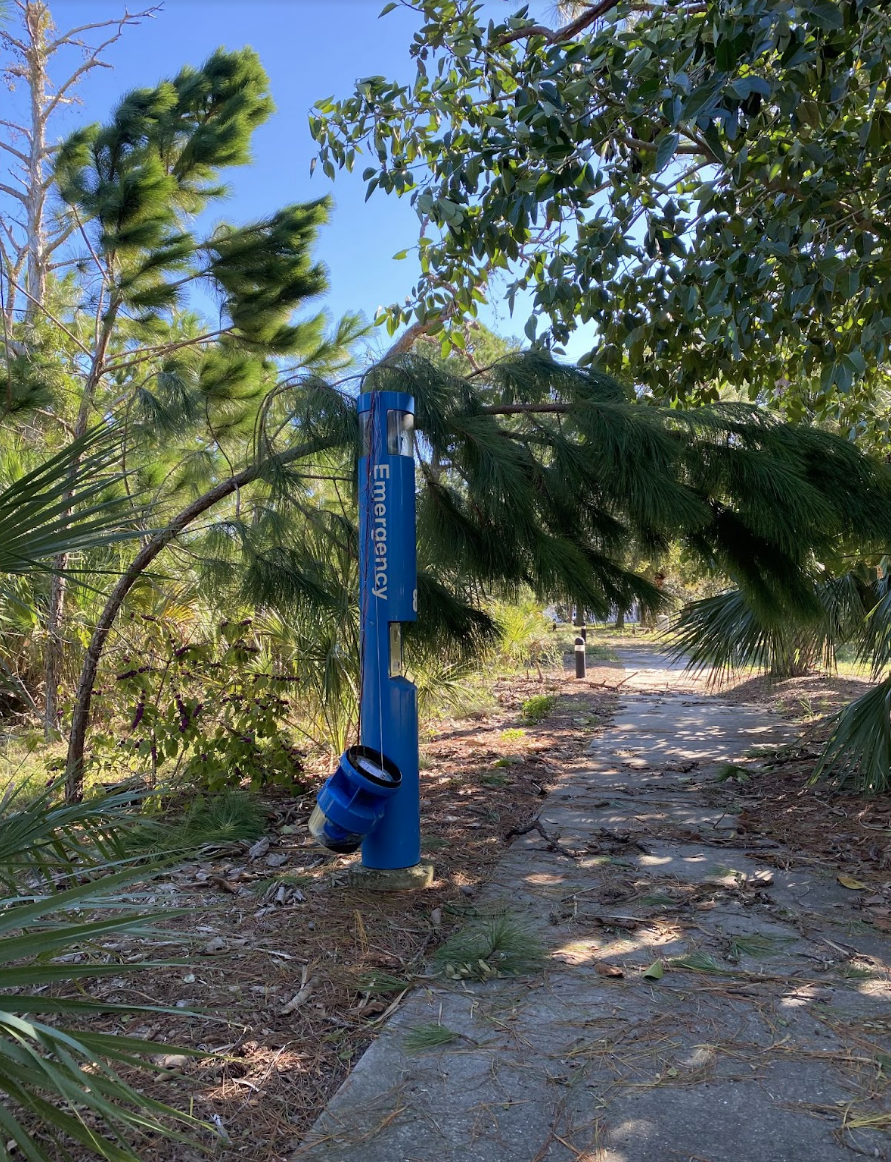 One of the emergency telephone poles (ETCs) ironically dismembered, with its conical head strung limply and swinging by remaining wires. Located on the west side of campus on a circular path near the College Hall and the bay. Photo courtesy of Bliss Jennings, caption courtesy of Nickolas Steinig.

Of the myriad abstract pillars that uphold an academic community, safety is an essential component. Unfortunately, the actual, corporeal pillars that uphold this value on campus—the cyan-smeared emergency telephone poles (ETCs)—have been out of commission for as long as any currently-enrolled students can recall, and the implications are both deceptively silent and resoundingly dangerous.

Scattered across the campus are the Cold Blue CB 1-S Signature Help Points—indicated by a tall blue spire and indented with a metal faceplate. According to the Cold Blue product website, the CB 1-S model has been around for well over 30 years—denoting it as Cold Blue’s senior Signature Help Point line. The purpose of the ETCs are to allow anyone walking without a phone to quickly contact the Campus Police Department (CPD) using the built-in telecommunication line.

The problem is that many of these ETCs have been plastered with sun-sunken flyers boldly and curtly proclaiming, “NOTICE: OUT OF ORDER” and have been for a considerable amount of time as of this article’s publication—including the ETCs outside College Hall, in Palm Court, in front of the letter dorms and the one in front of the Dort and Goldstein residence halls, to name a few. The specific amount of time that these ETCs have been out of order is unclear.

On a campus as architecturally open as New College, it doesn’t take a rocket scientist to discern the danger that inert ETCs may pose—all the more apparent in light of the campus’ ongoing history of break-ins and recently-reported incident of sexual battery on campus in an announcement released to students by the CPD on Oct. 6.

Investigation into the inoperable ETCs led to CPD Interim Captain Kelley Masten, who began as an on-campus officer 12 years ago and took up the Interim Captain position in May 2022. Growing up in New York about 30 miles from Buffalo, Masten’s close relationship with local law enforcement influenced her career choice. As Interim Captain, Masten is accountable for operational functions at the CPD—overseeing schedules, events, community engagement and the Property and Evidence Unit to name a few.

“The ETCs, we check them every single Monday,” Masten said. “We have a golf cart and check every single ETC by dialing in our dispatch and make sure they’re in operating function or not.”

“If there’s anything wrong with them, even if the sound is just a little fuzzy, we’ll put it out of order and do a Physical Plant work order,” Masten continued.

The lack of activity from the Physical Plant is tied to an ongoing supply shortage for parts required to repair the ETCs, which shares a concerning continuity with existing infrastructure issues and thinning budgets.

Interestingly, Masten mentioned that—even when operational—the CPD would receive very few reports over the ETCs. Masten also mentioned an interest in replacing the ETCs with a mobile phone app, similar to other universities.

“Something that we have learned recently is that a lot of universities have been making that switch over,” Masten said. “I do not believe that our campus is unsafe. However there are always levels of crime everywhere you go. There’s no way to stop all the crime there.”

Despite Masten’s reassurance, student safety has become a pressing issue against a growing rapsheet of invasions both infrastructural and corporeal of the New College campus. And—when safety is at risk to such a degree—the rich academic environment and chromatic culture of New College are in real danger of going the way of the ETC.