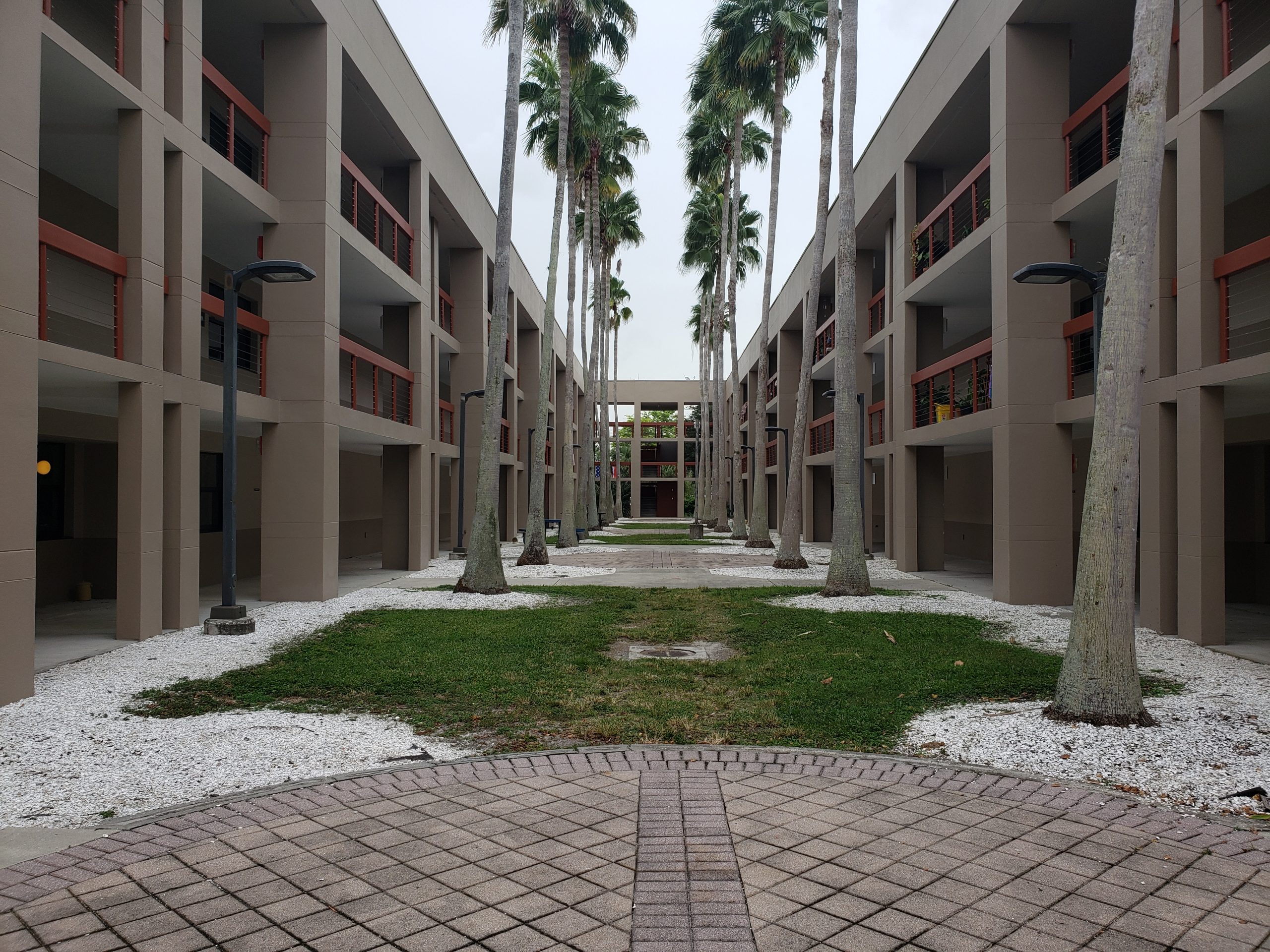 The residential community, and especially students living at Dort and Gold, have been on edge since it became clear that on-campus intrusions are not yet a thing of the past.

Content warning: discussion of burglary and assault on a college campus

Residential students, alumni and long-time faculty and staff of New College are all familiar with the “New College bubble”—an invisible barrier that on-campus affairs, ideals, and experiences rarely breach. But in fall 2020, this sense of security was disrupted after a series of break-ins occurred at both Dort and Goldstein and Pei residence halls. These incidents led to some immediate security improvements and started a conversation about surveillance on campus. However, two weeks ago on Aug. 25, an unidentified person entered a room in Dort once more, this time resulting in a student being sexually assaulted. With an ongoing investigation underway, police presence and surveillance are once again at the forefront of the community’s mind, and students want to know what will change and how it will differ from last year’s security measures.

The most recent case is being classified as burglary and battery, because of both the “unlawful intrusion into a residence” and the “unlawful touching of someone,” as Campus Police Department (CPD) Captain Kathleen Vacca phrases it.

“Some people are referring to it as assault, but an assault is not quite right,” Vacca said. “In some states it’s called an assault, but here in Florida an assault is an unlawful threat, word or act to another coupled with the apparent ability to do so, creating in the victim a well-founded fear. But battery is when you actually touch someone or use force against a person’s will.”

It is currently unclear how the suspect was able to breach the doorway. While last year, several of the victims of the first string of intrusions had left their doors unlocked, Vacca said that the CPD has received conflicting information on whether or not the student’s door was locked during this most recent incident.

The suspect has been described as a white male in his 30s, approximately 5’6’’and with brown hair and minor, lightly-colored facial hair. He was wearing a white shirt with dark colored pants or jeans. No one is in custody or being charged at this time, but the CPD has done several line-ups based on tips they have received.

In response to this most recent incident, extra law enforcement have been on duty around campus. Alongside the CPD are officers from the Sarasota Police Department (SPD), Sarasota County Sheriff’s Office and the Airport Police Department (APD) from the Sarasota Bradenton International Airport. These additional officers have been patrolling campus at random hours, mostly at night.

“We had a briefing and we gave them a kind of secondary role,” Vacca explained. “Let us take the lead. And if we need something, or if we need somebody transported to the hospital, or if they do get arrested, we’ll ask for [their] assistance in, perhaps, transporting.”

These officers have been provided the same case information as the CPD and know where the resident halls are located on campus. Vacca said that there is no reason any student should be confronted by an officer or asked to prove that they are a New College student.

“When the city or county sheriff’s office comes onto our campus, you should expect the same professional delivery of service,” Vacca said. “You should expect that if there is any interaction, that it is polite, courteous and respectful. And if not, you can let us know even if they don’t report to the Chief and I. Or you can call their direct if you have a concern or a complaint that you think needs to be addressed by a supervisor.”

Currently, surveillance cameras at the residential side of campus are at the Hamilton “Ham” Center and on the overpass near Z Dorm. Over the summer, a few were also installed at Palm Court. The only people with immediate and unrestricted access to any surveillance footage are the CPD, and while there is usually someone on dispatch, there is never constant surveillance. Vacca stated that the CPD has used what video the cameras were able to capture to build this investigation, but that the locations of these cameras are still very limited.

“There’s been discussion about the value of having video cameras in residential areas,” Vacca continued. “I don’t mean in people’s rooms or living rooms. I mean at the entries or exits [of residential areas] to better monitor—particularly what we call non-affiliated persons—from coming in and taking a bike, grabbing someone, accosting someone, or committing a burglary, for example.”

“That being said, we don’t have unlimited resources,” Vacca later continued. “Cameras are a wonderful thing because they let us be places simultaneously.”

Campus surveillance was last an issue during the original string of break-ins, when New College Student Alliance (NCSA) President Sofia Lombardi formed the Housing Safety Task Force, alongside the former Vice Presidents of Diversity & Inclusion and a select few administration and CPD members.

“We discussed everything relating to campus security,” Lombardi said. “Like, what can we do in regards to door locks, can we move to a swipe system, could we install cameras, could we install better lighting? We did do some lighting walkthroughs that resulted in the installation of better lighting, particularly behind Pei. We also did a walkthrough and an estimate of how much cameras would cost to be put over in the residential side. I don’t think the cost was a barrier, but we never got around to a more serious discussion on if we would install them.”

Lombardi added that most police and administration were supportive of installing extra cameras at the time, but students were generally against them due to privacy concerns. One year later, and student opinions are roughly the same. At a Towne Meeting held on Sept. 1, various students expressed concerns about invasion of privacy. Some suggested that cameras in residential areas could be used to monitor minority students and black students in particular without just cause, as well as students who use medical marijuana cards.

“These sorts of minor violations are generally referred to Student Affairs for follow-up,” Vacca said, commenting on marijuana use. “These are not the sort of things that really concern us in the way that this burglary does. And were we to have cameras installed in the residential areas so that we could see people come and go, we would have even better imagery upon which to base our investigation.”

After the most recent intrusion, Lombardi said that she met with President Patricia Okker and Vice President for Student Affairs S. Marjorie Thomas where she asked them to look into how much it would cost to re-key every dorm on campus or to switch over to a swipe-key system.

“In the meantime, we’ve ordered plenty more door locks and distributed them, as well as bars for sliding glass doors in Pei rooms,” Lombardi said. “But that has been probably the brunt of what we’ve discussed.”

One additional security measure that has been introduced this year is the formation of a student patrol system. Lombardi said that CPD Chief Michael Kessie recently put an application on Handshake, and that the position pays $12 an hour and will likely start up in early October.

“They’ll be an alternative to constant police presence on campus,” Lombardi elaborated. “I know that the general consensus among the student body is that we don’t want this level of police presence on residential campus at normal times, so I’m hoping once things slow down and hopefully a perpetrator is caught, we can move to a more student-led system.”

Until additional security measures are approved or disapproved, and until the latest suspect is caught and apprehended, Vacca urges students to stay vigilant and not hesitate to call the CPD if they see something out of place.

Existing footage related to the case consists of a 12-second clip that the CPD released to the public on Sept. 3, showing an adult man with dark hair, a grey t-shirt, dark colored pants and shoes and a white mask walking across the overpass. The CPD urges anyone who recognizes the person pictured to call them at (941) 487-4210.

“Students don’t have to be one hundred percent sure or accurate, or investigate it themselves to call,” Vacca said. “If something doesn’t seem right—maybe it’s an interaction, maybe it’s something you see in the distance—let the police go to it. If perhaps there’s a danger involved, let us take that risk instead of someone else. Simply having more eyes and ears out there, whether it’s from inside your residence or your car or bike, any of that is good information and we will respond to it.”