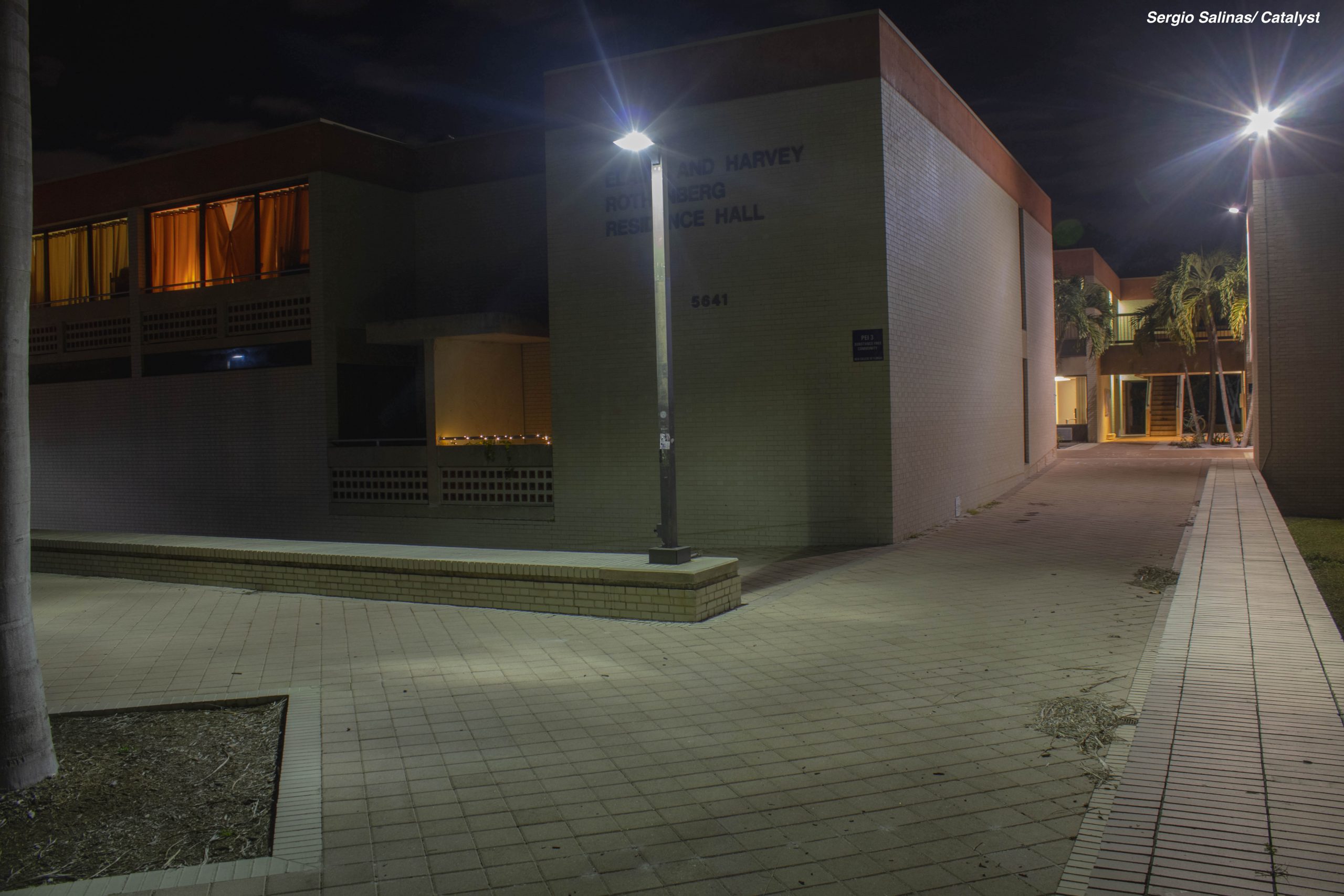 Lights in Palm Court illuminate the entrance to Pei 3rd Court on a recent evening.

This article is the second in a two-part series about the recent intrusions into dormitories on the residential side of campus. Read the first article that focuses on student experiences and administration’s immediate response here.

After a series of late-night intrusions into students’ dorms set residents on edge, the New College Student Alliance (NCSA), Student Affairs and Campus Police quickly enacted short-term solutions such as door alarms and increased patrolling. The intrusions have highlighted the vulnerabilities in the college’s safety infrastructure, leading to the establishment of a task force to discuss and develop long-term improvements. Their task isn’t easy: they must balance concerns for security, student privacy and the college’s limited financial resources.

“The task force is definitely going to discuss more than that, but I think the resources in the people that we have at these meetings will be very beneficial to accomplishing these priorities on a short term basis,” Lombardi said.

On Monday, Nov. 16, a group of student leaders and administrators, including Lombardi and Davis, embarked on an evening tour of the east side of campus to survey existing lighting. They identified some quick improvements, such as a few broken or blown-out bulbs, and have identified some areas to install new fixtures.

“It’s much easier to try and come up with a lighting solution that will at least discourage someone from coming into the space,” Davis said. “That’s a good short-term solution that we’re already working on. We have already reached out to vendors based on that walkthrough.”

Davis noted that an approximate estimate for the improved lighting is around $300 per fixture, so if they purchased around 30 units, that would cost less than $10,000. Davis also said that investments in solar lighting and motion sensors are being considered.

According to Director of Physical Plant Alan Burr, there are approximately 161 security cameras on campus. Not all of these cameras are of the same quality, though. The footage is stored for at least 30 days, which Davis said was required by law.  Moreover, not many cameras are placed around residence halls.

“There’s been a real reluctance of students to allow cameras in residence hall areas for privacy reasons, so there’s very few around residence halls,” Burr said.

Lombardi said that she does not support permanent installation of additional security cameras in residential buildings due to student privacy concerns, but would consider supporting the temporary installation of some cameras.

Davis said that buying new cameras costs between $1500 to $2500 each, but noted that adding more cameras to the system can quickly necessitate storage or server upgrades. Foss said the system currently uses approximately 12-15 terabytes of data.

Foss added that students should be included in a discussion about the delicate balance between privacy and security.

“That’s definitely a discussion students need to be involved in: their comfort level with constant monitoring, and what trade off they want—whether they want to feel safe and have these cameras in case something does happen, or whether they want a little bit more privacy,” Foss said. “Privacy and security is a balancing act because you’re essentially sacrificing privacy for security no matter what product or solution you’re talking about. That’s always the trade off.”

Currently, there are three different systems of locks on campus: physical keys, some magnetic swipes for gaining entry to some letter dorms and electronic proximity locks in Heiser. The proximity lock system functions with an encrypted key card and door reader that unlocks doors if the card is held close to the reader. While it would be ideal for the college to transition to a 100% proximity lock system, it may be prohibitively expensive for the near future.

Upgrading the lock system on the external doors of Dort and Goldstein halls would cost at least half a million dollars, but he is in discussions with the vendor, CBORD, to coordinate a campus visit to finalize an official cost estimate. Kinsley said the funding would have to come from the Housing budget, which is already under strain due to reduced occupancy rates.

Adding proximity locks to the Pei dorms presents two additional challenges: the age of the buildings and the prevalence of exterior doors. The dorms were built in 1965, so they would need to be retrofitted with the infrastructure and wiring required to support an electronic locking system.

“Because of the age, it doesn’t have the fiber or any of the electrical that you would need, and you have about 103 doors that each would have to be changed,” Davis said.

Because of the cost and infrastructural challenges, Davis said that the proximity locks are a long term goal, but Lombardi hoped that the college would upgrade the system sooner rather than later.

“I think we need to realize that this money is going to be spent in the next decade or so regardless,” Lombardi noted. “I think it would be wasteful to spend a couple hundred grand on a rekeying system if we’re going to end up moving to a swipe system [eventually].”

Aside from the prohibitive costs, the electronic key system would have some advantages over the current system, especially with lost keys.

“If you lost your card in your key, we can go into the system, revoke that card and now it’s just a useless piece of plastic,” Foss said. “Imagine if you lose a physical key. Now you’re talking about re-coring doors, depending on how many doors that key could open. With digital keys, it’s pretty rapid when it’s reported missing or stolen—you can revoke that access of that card in minutes.”

While nothing is ever unhackable, these lock systems are secured with multiple layers of precautions, including a locked and secured server room, account auditing and management, surveilling for brute force attacks, monitoring for phishing emails, limiting access to the system and the security of the key-making machine in the business office.

“There’s so many variables that you would have to have access to to be able to be in and do that and that’s why we do these layered security approaches,” Foss explained. “[Hackers] may break into one piece of it, but they still don’t have access to the 10 other pieces.”

But even if there is a systems-wide upgrade of the locks, Foss said that there are also policy implications that should be considered.

“You could put the technology in that can achieve what you want, but if you don’t have the written policy that says doors can’t be propped open, or the doors are always set the auto lock at this time, then what’s the point of having the fancy system?” Foss asked.

While Lombardi supported the revision of door-locking policy, she has vocalized her hopes that it would not punish residents who leave their doors unlocked.

“I don’t think any punitive measures should be taken should their doors not be locked, because ultimately, if a break-in occurs, regardless of their door lock, it’s not their fault and we shouldn’t blame people for either forgetting or electing not to lock their doors,” Lombardi emphasized. “But I definitely think it needs to be strongly recommended that they do [lock their doors].”

Other options: fencing and signage

The task force is also considering erecting barriers in some vulnerable areas of campus, especially along Tamiami Trail.

“I will be clear, I’m not talking about a gated community, but I think there’s areas right now—that side of campus is just very accessible—anybody can walk on and there’s almost no barriers,” Kinsley said. “We might not fence the whole campus off, but are there strategic spots where there’s really no need for people to be able to access that portion of campus.”

Kinsley added that additional signage on the residential side of campus to signal that visitors are welcome on campus, but there are not many public resources on the east side of campus.

Despite limited financial resources, Kinsley emphasized the necessity to act sooner rather than later and find viable solutions.