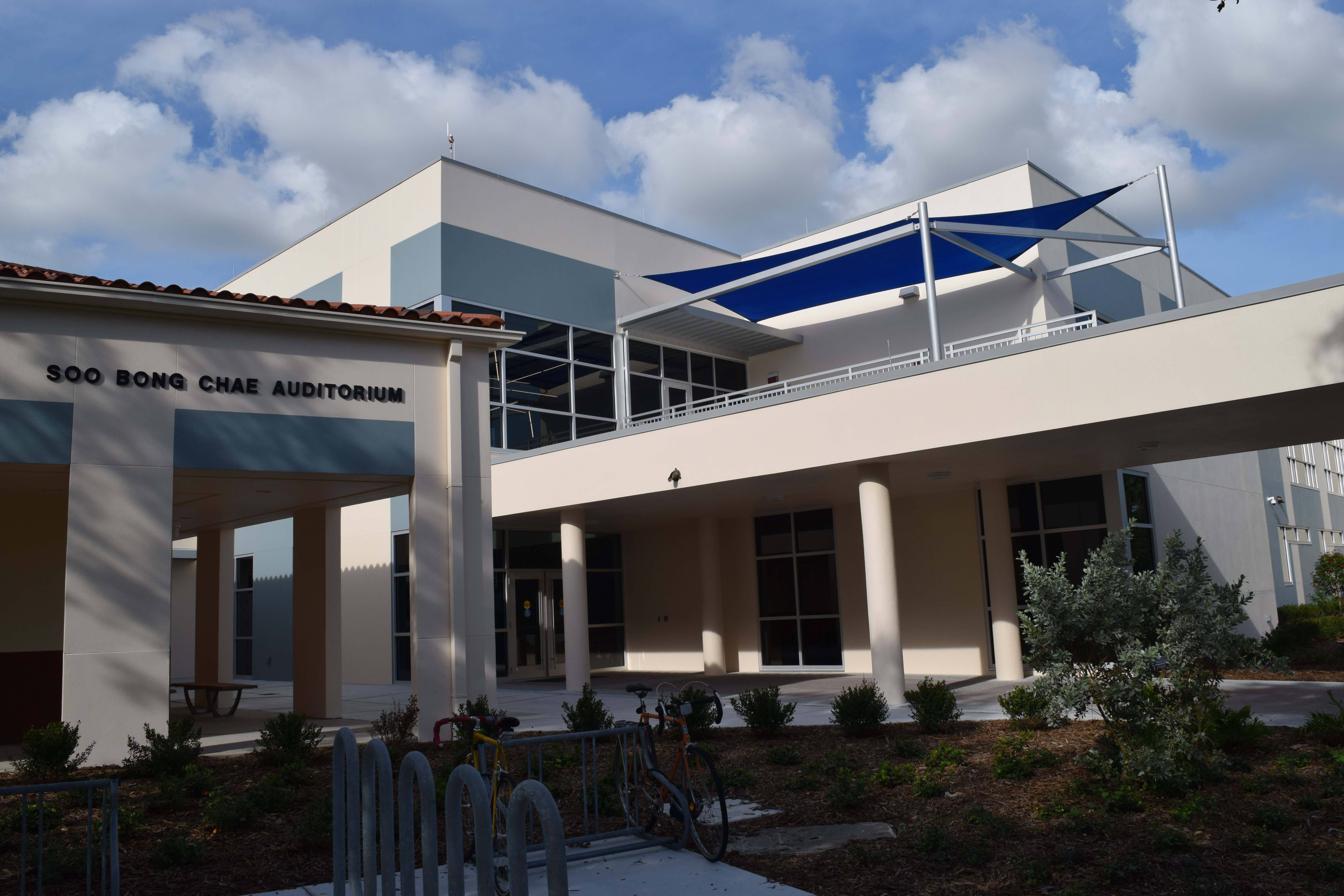 It’s hard to miss; the large white geometric structure lines the top of Dort Promenade, sporting various light blue rectangles around its exterior. Some say that it’s an eyesore, others say that it’s a massive improvement to the campus.

Construction on the 22,000 square foot building began in Oct. 2016 and is nearing its completion after just one year. The official grand opening is scheduled for Oct. 12, though students and professors alike are already using the new features that the space offers. Each year, more than one-quarter of students declare an area of concentration in mathematics or sciences, making New College the second highest natural sciences provider in the state of Florida, behind the University of Florida (UF). As the college intends to increase its student body, an updated, larger science building fits in well.

Funded by the state, the 9.7 million dollar project increased the size of the natural sciences building by more than 50 percent.

According to Project Manager John Milton, the breakdown of expenses are as followed: around $750,000 was spent on design, over one million dollars was spent on furniture, fittings and equipment and the rest—around $7.5 million—was spent on construction.

“The way that the finances work, there is a formula from the state that gives you the amount of money based on square footage,” Milton said.

Based on the money that was received, the building should have been around 20,000 square feet.

This addition, combined with the 34,000 square feet of the original wings, creates a total 56,000 square foot complex that the natural sciences department desperately needed.

“It’s long overdue,” New College of Florida President Donal O’Shea said. “When we originally built the building, it was supposed to have three wings. For some reason it got delayed, and then there was a time of inflation in building prices and the last wing got value engineered out, so they built a smaller building than they’d intended.” 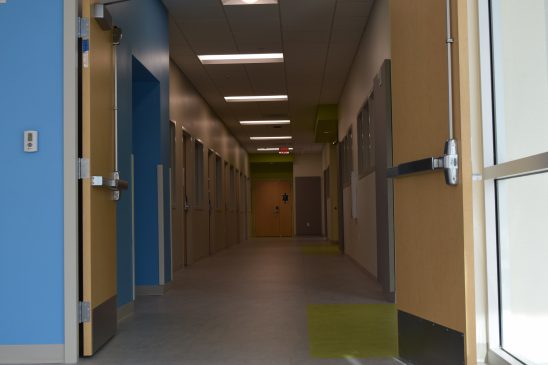 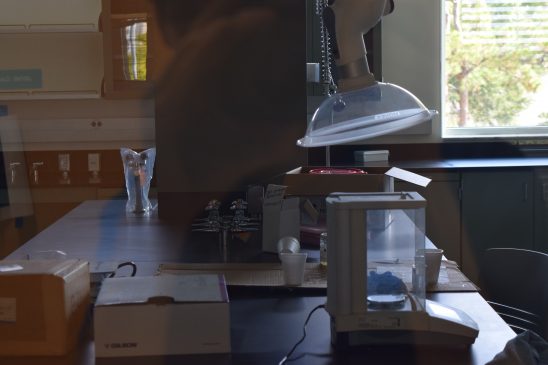 A building committee of professors from each of the different Natural Science disciplines created lists of requirements for the new wing and reviewed all of the possible layouts and designs.

“Katie Walstrom really shepherded the whole thing,” O’Shea said. “Don’t let her tell you it was an easy job; everyone always has different ideas of what to do and she was really masterful at making sure that everybody was heard.”

Among the list of requirements were three teaching labs that could each hold 24 students, a hallway specifically for data science and computer science professors and research labs outfitted with updated equipment.

“The architects would design possible layouts, and then we would meet and evaluate them,” Natural Sciences Division Chair and Professor of Biochemistry Katherine Walstrom said.

The layouts were also occasionally shown to the entire natural science division—beyond just the building committee—in order to receive feedback from all of the professors who would be using the space.

“At one point we had two different designs, we showed them to the division, the division prefered one, and then we worked on refining that one,” Walstrom said.

The chosen design needed to be edited, as the original plan was too ambitious to fit the budget.

“We wanted six research labs, we got three,” Walstrom said.

As a compromise, a large conference room and a double room that is currently serving as a classroom have been designed so that, when funding becomes available in the future, they will be able to be converted into the research labs that were cut out of the plan.

Choosing the furniture and interior design was also a collaborative effort: demos provided by two different furniture manufacturers were set up in the library, where people were able to vote on which they preferred.

“The architect had two or three color schemes, and the building committee chose one,” Walstrom said.

The idea to have large graphics was proposed and elaborated.

“I had always thought we would put some oversized graphics in there just to liven the spaces up,” Milton said. “Again, we asked the users who they would recommend, and we were careful to be diverse in the selection, both on speciality, gender and race–so we brought a good blend; a good mix.”

Like any building project, this one experienced a few bumps on the path to completion.

“At one point we had one head on the graphic that was four or five feet high. I don’t think that anyone needs Neil deGrasse Tyson five feet high, so we made it similar in size to the other graphics,” Walstrom said with a laugh. “It all worked out.” 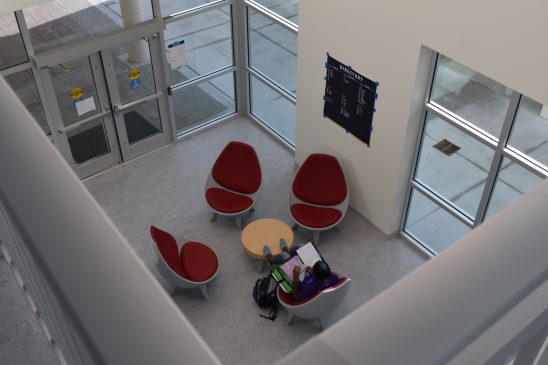 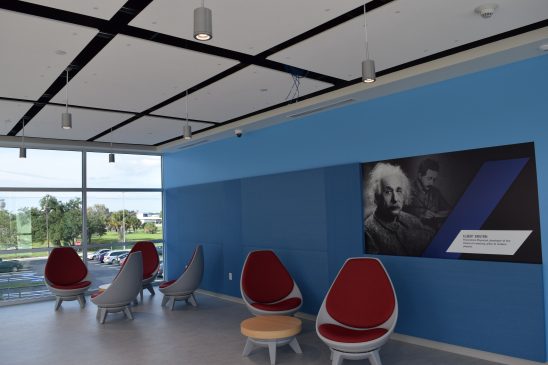 Since the original stages of planning, collaboration has been a main focus for the new space. The hallways in the old wings are uninviting and divided, whereas the new space is more open and designed for student and professor interaction.

“It’ll be a place on campus that will draw students,” O’Shea said. “It’s designed for communication and collaboration, with wide corridors so that students can meet and work together”

There are multiple lounge areas where students can study and discuss their coursework. Several of these areas have matte whiteboards mounted on the wall, perfect for working out long equations or leaving nerdy messages.

On the first floor of the new wing, there are eight faculty offices that face the new labs, the division and chair’s offices, a computer sciences reading room, a physics teaching lab with support spaces, a conference room and a large classroom.

In addition to being Leadership in Energy and Environmental Design (LEED) certified under its silver status, the building features Photovoltaic (PV) panels on the roof, which convert light to energy.

“This building is about science in the 21st century; the old Heiser was built twenty years ago, which was practically the last century. It’s the modern interpretation of what science should look like in 2017,” Milton said.