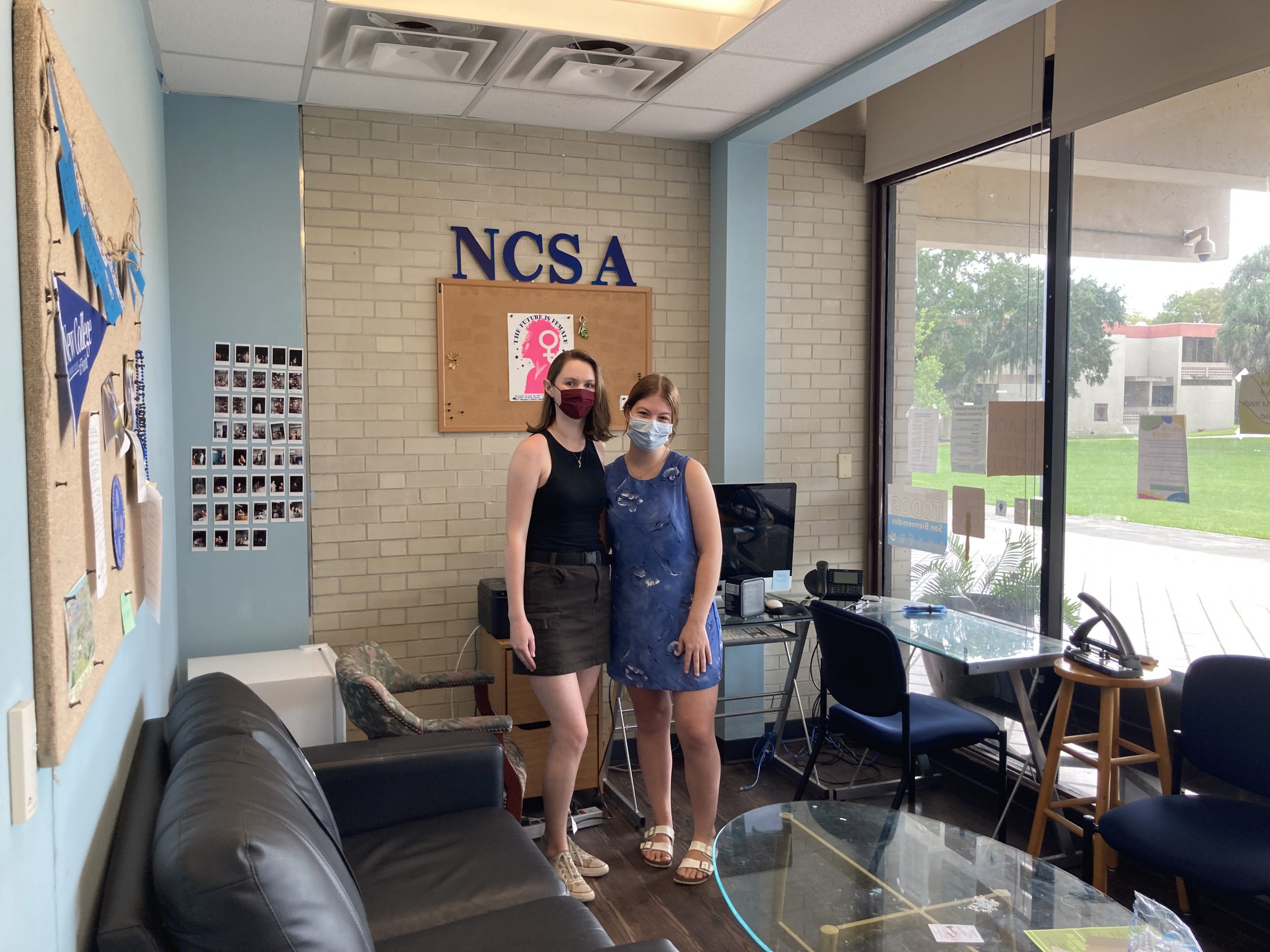 This year, the New College Student Alliance (NCSA) is composed of an unusually significant portion of first and second-years. What is driving this shift towards younger students, and what do they plan to do with their newfound power and responsibility? Some are well-seasoned veterans of youth organizations and positions of authority who joined with excitement to effect change and get involved. Others had little experience, but noticed a shortage of applicants and with the encouragement of NCSA President Sofia Lombardi, rose to the challenge. These groups vary in their ambitions, but they are bonded by their zeal to listen to students and make New College a better, more inclusive place.

One pair of first-years, ​​Connor Ehrich and Francis Garcia-Fernandez, got to know each other over the summer and successfully applied together for the positions of Co-Vice Presidents of Diversity and Inclusion. They have extensive amounts of experience with youth governments and organizations. Ehrich was heavily involved in several organizations throughout high school, such as being a State Lead of Florida Youth Climate Strike and the Congressional Debate Director of Beyond Resolved Debate. Ehrich said that she is “very interested in politics,” and interned with the public defender’s office after her freshman year.

“I’m always happier organizing and happier when I’m busier,” Ehrich said. “And like, yeah, that can definitely get hard sometimes and be very stressful. But at the end of the day, I’m happier when I am helping other people.”

Garcia also reflects the ambition of the incoming cohort. Like most of those interviewed, Garcia had a lot of criticism of student government in high school, but he was still at the heart of it.

“In high school, I did not have a great experience with student government,” Garcia said. “I was the class president and I definitely saw a variety of barriers…I truly made teachers and the administration angry in coming up with a variety of initiatives. One of the largest ones, and the most controversial was a TEDx event.”

When asked about their goals and intentions, the two had similar answers.

“We want to make sure we’re representing the students and making their voices heard, and defending our BIPOC students who are definitely disproportionately impacted by police,” Ehrich said in relation to the ongoing debate around police presence on campus.

“My plan is to listen, it’s that simple,” Garcia added. “I think that the most important part of this job specifically is to listen to our community.”

However, the duo were themselves inspired by the work of New College’s upperclassmen.

“We both knew we were interested in political activity and leadership,” Ehrich said. “And so we were like, ‘Would you like to do this together?’ Because Chloë and Rocio were the former Vice Presidents of Diversity and Inclusion, and they had done a great job with that role, and they did it together. And so I thought that Francis and I would work really well together.”

In New College fashion, according to Ehrich, third-years Chloë Arizona Fodor and Rocio Ramirez-Castro have supported Ehrich and Garcia in the transition, making things easier for the first-years.

Similar to Ehrich and Garcia, first-year and Green Affairs representative Veronica “AJ” Carrion has an abundance of experience. For her, it’s been specifically in the environmental sciences, being involved for almost all her life, and even going to a high school called the Academy for Environmental Science. Carrion said that the reason she chose New College was that it’s an EcoLeague school, and because of the great environmental program that goes with it.

“As soon as I saw that there was an opening in Green Affairs, I was like, ‘That’s something I need to do,’” Carrion said. “I really just want to get people more involved in environmental science. I think the Council of Green Affairs (CGA) already has a lot of projects on their plate, so I don’t really want to add more. But I definitely want to make sure that people who maybe aren’t as environmentally conscious see what’s going on and how they can help.”

Another pair of first-years, Matthew Lewicki and Meghan Courtade, had little experience with extracurricular positions of authority or responsibility in high school. Lewicki was band captain and Courtade found out about the existence of the positions they both currently hold “a couple of days before [applications] were due” by encountering Lombardi, who was set up at a table outside of the Hamilton “Ham” Center dining area. Courtade recalled seeing that several people were running for first-year Student Allocations Committee (SAC) representative, and so she asked Lombardi about what people weren’t running for because “you don’t want the government to be empty.”

“I want to go into law,” Courtade said about why she chose her position as Student Court Justice. “So I [thought] maybe that’s something good to have on my résumé.”

Courtade encouraged Lewicki to also join, and he chose Residence Life representative primarily because nobody else had.

“​​I was like, why not?” Lewicki said. “It’s my first year, it’s a good way to get involved on campus. And me and some of my friends all ran for stuff. So, I wasn’t in it alone.”

Lewicki explained how he has a lot of responsibility with regard to residents’ security, and how important this issue is right now. However, his responsibilities extend elsewhere. One example he brought up was how “some of the lounges are pretty drab.” Yet, he shared that he hasn’t “really got too in-depth as far as what I plan to do,” stressing how quickly he found himself in this new position.

There’s also the matter of second-years making up a significant portion of the NCSA, like Vice President of Student Life Bristen Groves, when current second-years are not familiar with a version of the New College experience before COVID-19.

“Over the summer, a current cabinet member had recommended me to be the Vice President of Student Life,” Groves said. “And I was like, ‘Wow, this is perfect,’ because it’s exactly what I want to do on campus. I want to be really involved with the students and serve and love other people. And I know that a lot of people do not feel very loved on this campus, and I want to try to do as much as I can, so that New College begins feeling like a community again.”

Groves cited COVID-19 and the consequent quarantines as a cause of this loss of community, but she also posited that it might have been a cause for why it was so difficult to get people to apply for the NCSA.

“I feel like there are two people with COVID-19,” Groves explained. “There’s the kind that’s like, ‘I’m kind of used to chilling now, and I’m not really ready for this yet.’ And then there’s the kind that’s like, ‘Let’s go! I want to get going and I want to get involved.’ And that was definitely me. And I feel like, because [of this] with the elections that we just had, it was extremely difficult to get people to apply, because I think people are not interested.”

Groves also brought up the assumptions new students have of the NCSA that are brought with them from high school, such as those which Garcia observed in high school student government when trying to explain the disinterest.

“I think [students] have kind of a certain idea of what NCSA is and what student government is, and you know, you hear student government and, you kind of roll your eyes and cringe a little bit,” Groves said. “When we see something that we have the power to fix, we want to actually do something about it. And you have that ability as part of the NCSA.”

Additionally, Groves said there is a misconception that being a part of the NCSA requires a panoply of qualifications, experience and time.

“Anybody can join NCSA,” Groves explained. “It really isn’t about what qualifications you have going into it—it’s about what you’re willing to do in the role.”

While those first years who decided to either apply or run for NCSA positions this year vary in their experience, they all share a willingness and excitement to listen to the students and make New College a better place—more diverse, more sustainable, more secure and more neighborly. There are many possible explanations for the decreased interest in the NCSA this year, but the relative increase in participation among first-years might suggest that people who otherwise would shy away from the NCSA are getting more involved.

According to second-year and Chief of Staff Grace Keenan, the shift may be explained both by increasingly eager first-years and a large number of upperclassmen deciding to step down due to having too much on their plate. Several positions—both hired and elected—are still vacant, such as SHARE Room TA, Bike Shoppe TA, and Co-Vice Presidents of Green Affairs.