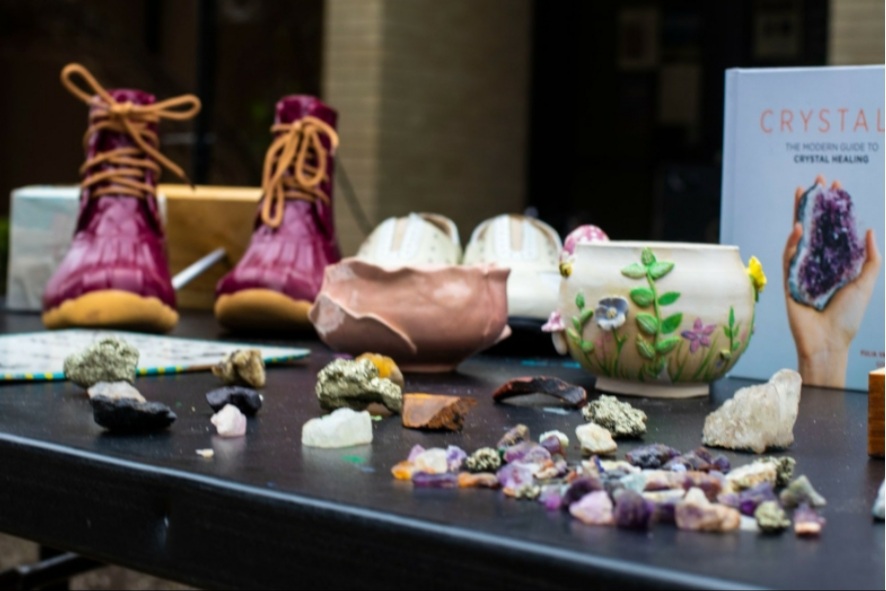 One of the many tables selling wares on Feb. 6, this one displaying a collection of rocks and crystals.

On Feb. 6, several thrifty students sought out to buy others’ wares at an open garage sale for significantly reduced prices. Tables were hauled and set down at The Nook as boxes were unpacked and clothes were spread out on tablecloths. The host, third-year Nicholas Beck, planned this event in order to raise funding for the traditional Valentine’s Center of the Universe Party (COUP)—with the theme Where the Wild Things Are, and to promote a sense of student community amidst all the COVID-19 chaos. In raising money for the Valentine’s COUP, Beck earned enough for extra decorations such as bubbles, flower crowns, fairy wings and more decorations. The garage sale was a hit—both in population and profit for everyone.

“I wanted to be less broke and am kind of a hoarder, so with that, what better way to make a few extra dollars than to sell my stuff?” Bel-Air asked.

Their collection of items for sale included a yoga mat, a crown, a chromebook and a few formal dresses. The only issue that they faced in regards to accessibility within the garage sale was having to retrieve and carry a table from the Student Activities and Campus Engagement (SAuCE) office. Generally, the experience of being a vendor at the garage seemed to be mostly positive.

“I honestly felt like everyone there was friendly and had the same goals in mind,” Bel-Air said.

At Beck’s table, which consisted of various Where the Wild Things Are themed merchandise, all of the money earned went to purchasing final decorations for the event. In particular, he sold $1 posters for the event, giving the reason for the abnormally low price.

“It is something that anyone can afford if they so desire to keep a memory of the event in material form,” Beck explained.

His table also sold $15 white t-shirts and $25 tie-dyed t-shirts with the graphic for the Valentine’s COUP designed by third-year Tatiana Pillsbury. In total, Beck stated that $250 was used for creating the merchandise, yet he netted over $120 in profit.

Along with organizing the garage sale to raise funds for COUP, Beck also scheduled multiple bands composed of students and alumni from New College. Featured student bands such as Too Clouded, Dreamthing and Freelancer played fervently as they displayed their unique styles of music; it was a massive success as students crowded on the Z-Amp stairs and danced the night away. Those not involved in a band, uncomfortable performing or who just wanted to dance were encouraged to express their style by signing up for student-led DJ sets.

There were several designated areas which flaunted themed decorations on Feb. 11, the night of COUP. In Palm Court, an area to dance with flashing lights was surrounded by bed sheets hanging from tree to tree. Z-Green was mostly a peaceful space with candle-lit bags laying amongst the grass while Z-Amp echoed with the sounds of authentic instruments from the band performances. Lowly lit areas were the center of the party culture where The Nook offered rave-like lighting, additional performances, snacks and non-alcoholic beverages. The Old Mail Room contained student DJs standing on tables while leading the crowd with their playlists. To bring safety to the event, HCL-7 was assigned to be the “chill area” with very low volume as a place to rest and recover from the stimuli that can be overwhelming for some, watched over by student volunteers.