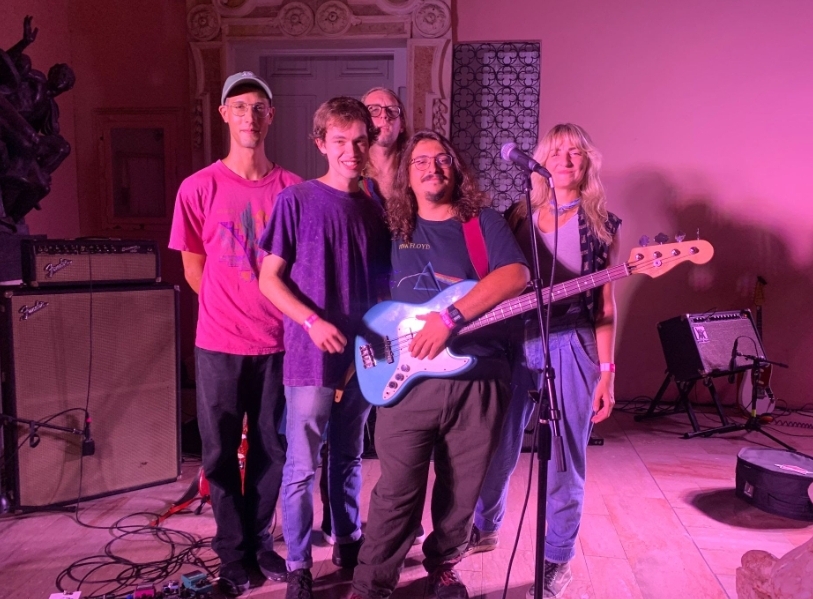 “People looked very confused as to why we were about to play an hour and a half’s worth of Grateful Dead covers in the middle of Ham,” La Rosa said.

After The Wizards of Haml Jaml Present: The Haml Jaml Jam Band Experience, Gurt and La Rosa took to musical pursuits together again in their former band Pachamama’s Microwave who played the infamous Bike Shop Show of 2019. It was there the two played alongside Sarasota’s Dreamthing and New College’s own, Myles Optimystic, who La Rosa notes as a “New College music legend.” La Rosa recalls talking with Dreamthing after the show, who had played various Palm Court Parties (PCPs)—now called Center of the Universe Parties (COUPs)—under previous band The Pretty Dirties.

“They were one of my favorite bands that played as PCPs,” Gurt explained, expressing his mutual admiration with La Rosa for the group.

“I think they were maybe one of my favorite bands just in general at the time,” La Rosa added. “I just really liked what they had going on.”

“Eventually, you know I asked Lev, I remember being like, ‘Yo, do you think they need a bass player? ‘Cause they don’t have a bass player,’” La Rosa said. “And he was like, ‘Nah, I’m sure if they needed one they would have one.’ And I was like, ‘Ah, you’re probably right. Should mind my own business.’”

Max Kucera (‘20), New College bard and former lead of Pachamama’s Microwave and The Wizards of Haml Jaml Present: The Haml Jaml Jam Band Experience, was recording his senior thesis at Hyde House Studio, where La Rosa assisted him with bass. Hearing La Rosa play under professional conditions, Alex Alfonso, guitarist for Dreamthing, asked if he might be interested in joining the dreamers.

“Alex was like, ‘You wanna play bass for our band?’” La Rosa continued. “And I practiced with them, and then a few months later Lev joined as a drummer. And that was that and that was our musical journey at New College.”

La Rosa added the importance of the New College community support and structure for the student music scene in contributing to his musical career.

When asked about attending Ringling Underground during their time as students, Gurt replied that he always thought “it’d be really cool” to play. La Rosa concurred, “that’s a big one,” describing the opportunity as surreal.

“Ringling Underground only happens because there’s a lot of people here who are cool people who like music, who like art, and who are willing to come out and have a good time and patronize the arts in the immediate area and without that, that kind of stuff doesn’t happen,” Blank said.

“I feel Ringling Underground is also really cool as a New College student because it feels like it’s happening on campus almost,” Gurt added.

La Rosa requested a shoutout to Assistant Professor of Digital Media and Music and Director of New Music New College (NMNC) Mark Dancigers in his support of student music.

Dreamthing will be playing at New College on Friday, Dec, 3 for the ABC Wall, the last Wall of the semester. Their live recording for WSLR with New College’s Joey Daniels (‘21) can be found here.