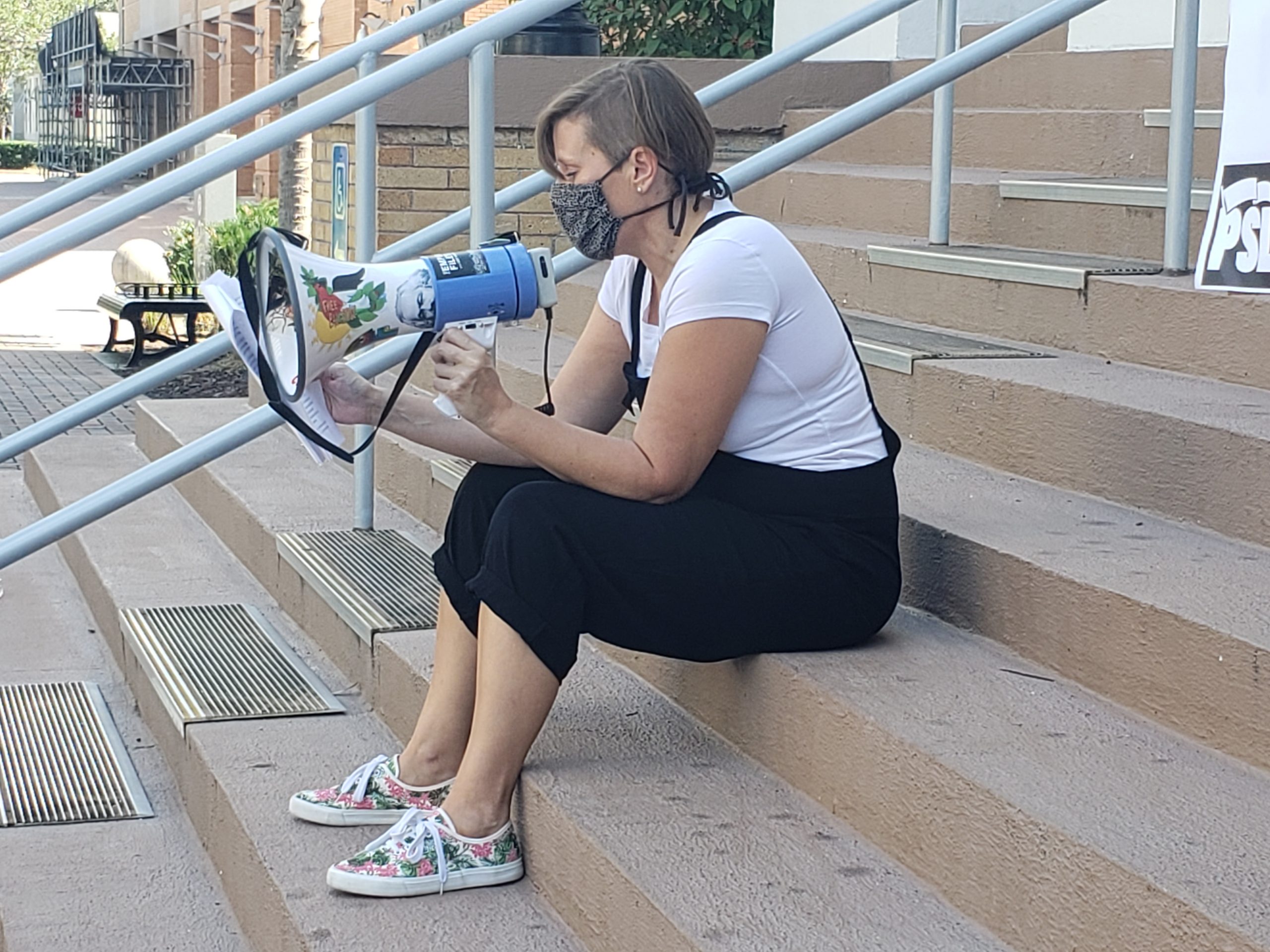 Kimberly Cox on the Manatee County Courthouse at an Oct. 23 protest in order to have her charges dropped.

The Women’s Voices of South West Florida (WVSWF) have announced an exciting victory for organizers in the fight for reproductive rights—on Nov. 12, Kimberly Cox’s charges were officially dropped. For those not familiar with the troubling saga, Kimberly Cox was arrested some weeks ago at a peaceful demonstration in retaliation for asking an officer his name and badge number. Despite the entire encounter being recorded, Cox was charged with “resisting arrest with violence, trespassing and disturbing a school or religious event.” Feeling that this arrest was a baseless abuse of authority and an attempt to intimidate lawful protesters, organizers went on to host a targeted campaign aimed at pressuring the Manatee County Sheriff’s Department to drop the charges. One of the organizing bodies, the Party for Socialism and Liberation (PSL), has had success with this strategy in the past and wanted to show solidarity with Cox and other protesters who put their livelihoods on the line. Ultimately, their gambit proved successful.

“It is with overwhelming excitement and relief that we can formally announce Kimberly’s charges have been dropped, thanks to the quintessential work by Ben Jones, of Longwell Lawyers, and the relentless support of her friends and family!” WVSWF wrote in a letter addressed to supporters.

“This victory against the corrupt system truly shows that the power is within the people,” the letter continued. “And that we have the ability to establish the precedent that we will defend each other and work to establish the standard for our law enforcement that they are being seen and held accountable.”

While organizers viewed this as a significant victory for the movement and for Cox,  they were also quick to point out that the legal accusations themselves created lasting and unrectified burdens for Cox.

“Aside from the trauma of the arrest and the residual stress that came with it, Kimberly had recently lost her ability to work as an Uber Eats driver due to the pending (false) charges,” the letter read. “Kimberly is a caregiver to her parents and her children, an active member of local activist groups and an incredible person. She and her family did not deserve the mental, financial and residual burdens of this false arrest.”

WVSWF then went on to call for Manatee County Sheriff’s Department staff to deliver a direct apology to Kimberly Cox and her family for the harm their actions had caused.

Although the deeper costs to Cox for being arrested and accused may never be fully compensated, this remains a significant win for Cox and for the organizers attempting to advocate for the changes they see as necessary.