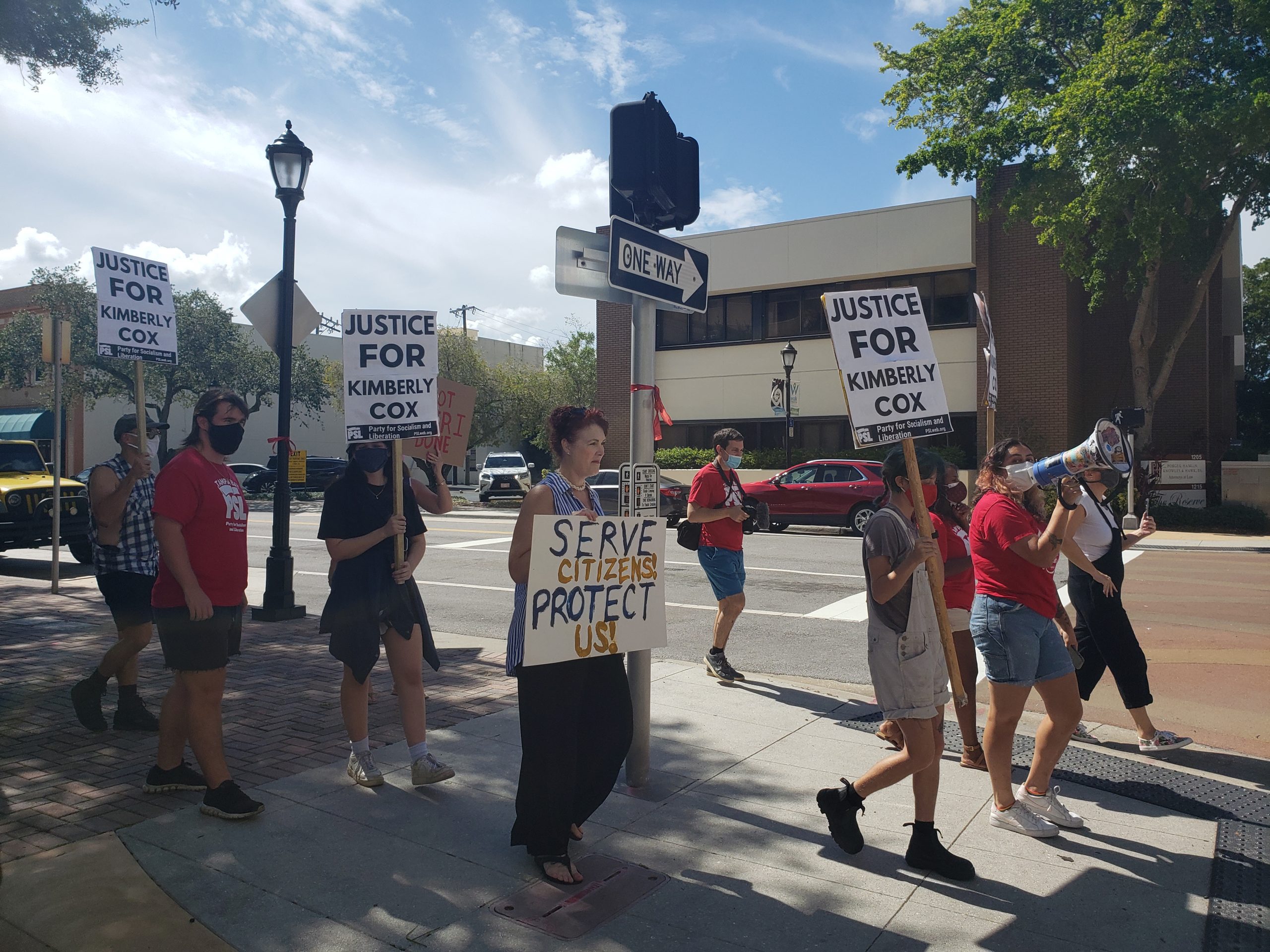 Following an onslaught of anti-abortion legislation in Texas on Sept. 1, Manatee County has followed close behind as the County Board of Commissioners voted in favor of implementing similar anti-abortion restrictions as early as two weeks later. This has sparked a wave of protest throughout the county, and tensions reached an all-time high on Sept. 14 when activist Kimberly Cox was arrested outside the Manatee County Commissioners Office after asking Deputy John Neri for his name and badge number, all of which was recorded. Over a month later, Cox has continued to fight for her charges to be dropped, for action to be taken against these officers and for the value of reproductive rights. Showing solidarity, a “Justice for Kimberly” protest was organized by the Tampa Bay branch of the Party for Socialism and Liberation (PSL) on Oct. 23.

PSL is a socialist party that tackles a wealth of social issues, with an emphasis on anti-imperialism and labor movements. According to Tampa Bay branch member and press contact Ali Abdel-Qader, PSL’s involvement with reproductive rights stems from a belief that the political will to take effective action in support of the issue is lacking, and that “these demands are only going to be enforced if we have people struggling in the streets together.”

“We see that the Democratic Party is not so interested in actually solving the issue of reproductive rights,” Abdel-Qader continued. “More as using it as a wedge to incentivize their voters to keep coming out and supporting them. Like, ‘If you don’t vote for us, we’re not going to be able to protect you from the Republicans who want to take it away,’ but they don’t have any interest in really protecting reproductive rights. Because if they did, then they would use the House, the Senate, and the White House, which they all currently control.”

PSL members were present at the protest that Cox was initially arrested at, and have since then been active in providing her with support. This has included both the most recent protest and a “Justice for Kimberly” call-in to State Attorney Ed Brodsky on Oct. 14 and 15 in order to demand that her charges be dropped.

The Oct. 23 protest took place at 1 p.m. at the Manatee County Courthouse, and was inspired by the recent success of a similar campaign in Hillsborough County, in which charges were dropped against Black Lives Matter (BLM) protesters Jamie Bullock and Chukwudi Uche after they were arrested in accordance with Republican Gov. Ron DeSantis’ anti-riot bill. PSL was also very active in this campaign, participating in call-ins and protests.

“We’ve been coordinating with her [Cox] since day one and we figured that we should be able to do the same thing here, because this should be an even easier open-and-shut case,” Abdel-Qader said. “We have it all recorded. They’re trying to say she resisted arrest with violence. That’s not true, we have the video.”

Cox herself made an appearance at the Oct. 23 protest, and spoke in detail about the circumstances of her arrest and the lasting emotional and financial effect it has had on her and her family.

“Over the last year and a half, I’ve been to over 200 protests and rallies, and in that time, the only instances of violence were brought on by their counter-protestors or police,” Cox said from the courthouse steps, megaphone in hand. “Our greatest weapon against this violence is film. The entire world should see the police brutality that is the police force of the United States.”

Cox continued to describe the treatment she received upon her arrest, stating that her attempts to speak with Neri lasted under 30 seconds before he grabbed her and ordered two other officers to place her in handcuffs. She described one such officer as “violent” and “taking pleasure” in squeezing the handcuffs and causing lasting pain and numbness in Cox’s hands. This was emphasized by Cox intermittently pausing to shake or stretch out her hands throughout her speech.

“These officers wrote in their report that they had no choice but to arrest me,” Cox said. “They said that I disrupted a meeting. In fact, along with resisting arrest and trespassing, those were my charges. But if you look at the video taken by me and the security cameras in the building, you can see the disruption was actually caused by [the officers.] They were the ones escalating the situation, and they were the ones who raised their voices and slammed the door, causing the meeting to go into recess. I simply asked a question.”

Cox explained that following her arrest, she was placed in a courthouse holding cell overnight after her stay was “unnecessarily extended,” and gave her thanks to PSL members and friends for continuously sending in calls until she was released around 4 a.m.

Over a month later, Cox’s arraignment has been postponed and she was instead offered a free trial intervention deal, which she turned down. Cox said she felt “insulted to be offered something” for having done “absolutely nothing wrong.”

“You cannot tempt me into accepting guilt by taking a plea by dragging this out, and you cannot set a precedent for future protests in this city, this county, and this state by unfairly charging me,” Cox said.

“These officers are violent and aggressive thugs and the people of this county should not be subjected to officers capable and guilty of this atrocious behavior,” Cox later continued. “This was caught on film when they knew they were being filmed. That didn’t deter them, it encouraged them. Imagine for a moment all of the things that are not caught on film. They shouldn’t be trusted to serve and protect.”

The Manatee County Sheriff’s Department could not be reached for comment.

Cox is due in court on Nov. 15, and said that if her charges are not dropped before then, that she plans to arrange another protest until these demands are met.