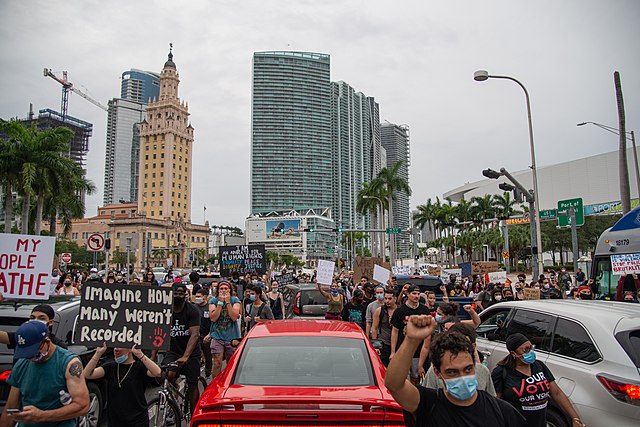 Following widespread protests against police brutality in the summer of 2020, Governor Ron DeSantis decided to sign into law what he himself calls an “anti-riot measure.” The law promises tougher punishments on those that engage in what the Florida legislature determines to be a violent demonstration and is tougher on local governments that choose more progressive measures, such as defunding police departments. It imposes more severe penalties for those who block highways or knock over monuments, as well as those who participate in “mob intimidation.” Specifically, in the case of destruction of commemorative monuments such as plaques and memorials, the law makes these acts second-degree felonies, punishable by up to 10 years in prison.

“We saw images of people just sitting outside eating at a restaurant, then you have this crazy mob circle around them and start screaming and really intimidating.” DeSantis said. “I’m sorry, that’s unacceptable. You’re going to be held accountable.”

In regards to punishing local governments, the law would target municipalities that decide to defund police departments. Furthermore, if a municipality chooses to reduce the budget for their police, the government has to go through the state legislature, which can overturn this decision. This is especially discouraging in the current climate, considering the nationwide efforts and calls to defund American police and reallocate those funds to alternative departments. Additionally, DeSantis stated that local governments would be liable for damages if leaders instruct law enforcement to stand down.

“If you harm others, particularly if you harm a law enforcement officer during one of these violent assemblies, you’re going to jail,” DeSantis said.

The law has received backlash from activists and Democratic lawmakers, who argued that the bill silences the voices of minorities and organizations attempting to fight against police violence.

“Not only is this racist at its core, but it’s also a reaction to what occurred over the summer after the death of George Floyd,” Democratic Sen. Shevrin Jones said. “The governor made no mention of the Jan. 6 insurrection.”

Governor DeSantis has not responded to criticisms about the law. At the signing, he left without offering answers to any questions anyone may have had. A nonprofit advocacy group known as the Lawyers Matter Task Force (LMTF) has filed a federal lawsuit against Governor DeSantis, Florida Attorney General Ashley Moody and Orange County Sheriff John Mina as a result of the signing of this bill. The lawsuit’s basis is that the new law is unconstitutional on multiple counts. The lawsuit was filed by Orlando attorney Aaron Carter Banes, who mentioned the following:

“The purpose of these laws are nothing more than an attempt to silence the Black Lives Matter movement and other civil organizations by limiting the ability to protest. The First Amendment is a pillar of American democracy, and the ‘anti-riot’ laws clearly strip Floridians of their freedom of speech and right to assemble.”

In addition to claiming that the new law breaches the First Amendment, Banes and the LMTF also believe it is in violation of the Eighth Amendment.

“The law also would subject those arrested to “excessive bail, fines, or cruel and unusual punishment as a means of hindering the speech of dissenting opinions,” the lawsuit reads.

In response to the filing of the lawsuit, a spokesman for Governor DeSantis made a statement which stated that the bill protects businesses and supports law enforcement, and it will be defended. The Orange County Sheriff’s Office declared that the lawsuit has no merit and there will be a motion filed to dismiss it. Attorney General Moody’s office had no comment on its developments.