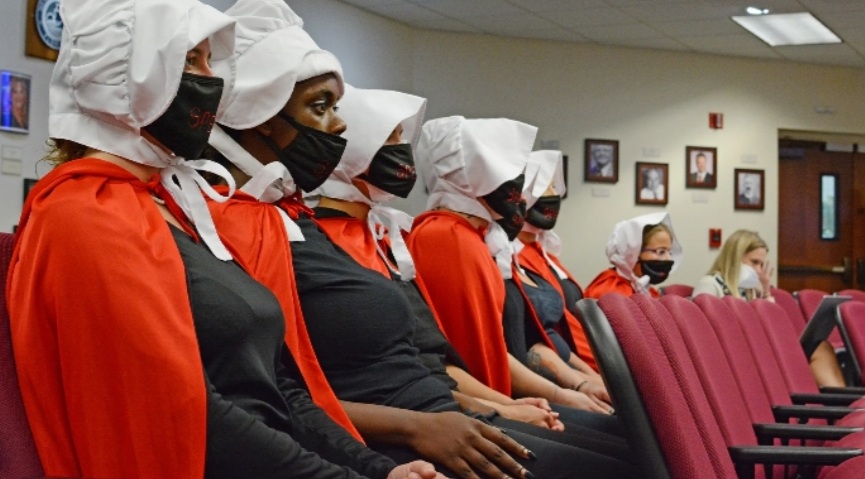 A new wave of anti-abortion legislation headed by district and state policymakers in Texas has successfully enacted laws that dramatically inhibit access to safe reproductive care. SB8, a Texas law that took effect on Sep. 1, prohibits all abortions procedures taken after just six weeks of pregnancy and has effectively criminalized any who would help enable an abortion by opening them up to civil litigation, including doctors, nurses, and even Uber drivers. At the same time, the U.S. Supreme Court has decided not to intervene, tacitly approving Texas’s virtual wholesale ban of safe abortions procedures.

This shocking victory for conservative policymakers, combined with a lack of legal consequence, has emboldened other religious and political groups to push for similar policies to be implemented elsewhere. This movement has set its sights on Manatee County, FL as a potential target for success. City Commissioners have been covertly drafting ordinances for anti-abortion legislation, probing the Florida state attorney general for legal advice and communicating directly with Texas representatives in the hopes of achieving a symbolic victory that will spread throughout Florida.

Outraged by the encroachment of civil liberties and overt political gamesmanship of the commissioners, a network of activists has been spearheading protests that aim to challenge the County Commissioners’ plan and organize support for reproductive freedom and justice. These protests have culminated into the upcoming March for Reproductive Rights, which organizers will hold in Manatee County this Saturday, Oct. 2, at 11:00 a.m. Activists project attendance to this march to land in the hundreds, a significant increase from previous events. Other cities have responded to the situation and plan to hold protests across the United States simultaneously in solidarity.

“Women’s Voices of South West Florida (WVSWF) was founded the day after James Satcher proposed anti-abortion legislature for Manatee County,” local activist Kate Danthy-Samitz said. “When we heard that this was potentially coming to our neighborhood, we decided to act and defend our community against it.”

After helping found the WVSWF back in August, Danthy-Samitz and others organized a series of peaceful and unique demonstrations. Participants observed the County Commissioner meeting garbed in bright red cloaks and hair bonnets in reference to the popular dystopian fiction. “The Handmaid’s Tale,” in which women are forced to carry to term the children of the rich.

The protests were largely successful, helping the organizers gain press coverage, generate interest from onlookers, and pressure at least one commissioner to distance himself from the anti-abortion legislation.

“If you look at the Manatee County commissioners, they’ve been in the national media for the last year by being theatrical, by being dramatic,” long-time organizer and handmaid demonstrator Sarah Tarker said. “I think we hit them back with that when we protested.”

At the sit-in demonstrations, protesters claimed they abided by the rules of the County Commissioner meeting. They described their interactions with staff and security to be generally receptive. Yet, at the third protest on Sep. 14, that would reverse dramatically.

After one of the protesters was issued a trespass warning by an officer following an unfriendly conversation, the demonstration leaders went to ask the officers there what had happened and how they could deescalate the situation.

Kimberly Cox, an activist in attendance at the demonstration, asked one of the officers’ for his name and badge number after he refused to address their questions. In response, the officer quickly and violently arrested Cox. She was then charged for resisting arrest with violence, trespassing and disturbing a school or religious event, for which she may receive up to two years in prison. Organizers filmed the entire arrest as part of a live stream.

“The most disheartening part was that this officer was completely willful in what happened,” Danthy-Samitz explained. “I mean, it was almost tentative. You could see in the video it takes less than 25 seconds between when we come in and say, ‘Hey what happened? How can we correct this?’ And when he’s got her on the ground and has her arm twisted in a direction it’s not supposed to twist. The malice and the aggression is palpable in the video.

“He chose to escalate the situation, and this is not the first time that we found out he’s done this,” Danthy-Smith continued. “He did this in Sarasota in 2012 to a disabled Iraq vet during Occupy Sarasota. Officer Marry chose to use force, and it ended up in a lawsuit for the Sarasota Police Department. From what I understand, the victim settled, but it’s disconcerting behavior, and it’s unnecessary. This is not the behavior of somebody who truly has sworn in to protect and serve his community.”

Manatee County Sheriff’s Department opted not to comment on the arrest when contacted.

Demonstrators implied that they refused to be intimidated by the arrest and have only become further resolved for the march on Oct. 2.

“Kimberly Cox is still getting charged with all her charges as of right now,” Danthy-Samitz asserted. “They have not been dropped. She wants us to push forward. We’re going to continue to push forward. On Oct. 2, we intend to show legislators across the entire state that when one of our communities is in danger, everybody will rally to protect them.”

As part of their strategy, protesters are pursuing more than just opposing what they consider dangerous and ineffective policy–they want to pressure policymakers to support measures that uplift disenfranchised parents, particularly those of color or a marginalized identity.

“It is discouraging and disheartening as a black woman to see this,” Tarker admitted. “If they’re not kidnapping our babies or shooting our babies, you’re jailing our babies. I think it’s time for us to say all the way across the board that this is enough. So, we are advocating for reproductive freedom and justice, in every which way that means. That is something we are going to be pressing as soon as we can get off of this subject that should have been done 50 years ago.”

The Oct. 2 march may be one of the largest for Manatee County and the Bradenton area in some time. The strategy of organizers has generated results so far, but whether this movement will be able to contest or reverse the wave of anti-abortion policies remains to be seen.