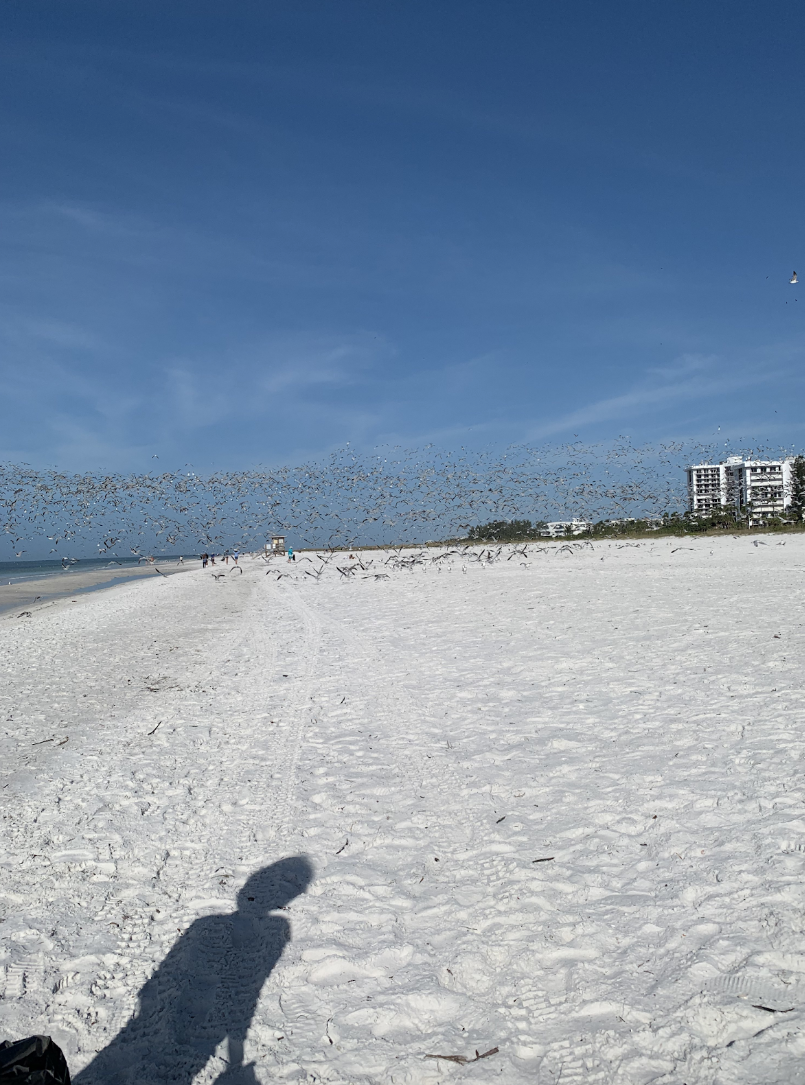 Birds on the beach escaping the algal bloom's effects. (Courtesy of Po Henry.)

Hurricanes are one of the most lethal natural disasters that there are—and Florida is the hurricane capital of the United States. Two major storms hit Florida this hurricane season, and while both have been disasters, there is a quieter, subtler ecological nightmare that follows behind them.

Whenever a hurricane hits Florida, the state tends to experience a tremendous amount of red tide algal bloom. While you might not know exactly what that means or what it does, anybody who has lived in Florida knows that red tide makes our beaches hostile to locals, tourists and the animals exposed to it. But what is the exact connection between red tide and hurricanes?

Contrary to popular belief, hurricanes don’t cause red tide—at least, not exactly. Red tide lives primarily much further into the Gulf, and requires a particular set of circumstances. The problem is that hurricanes indirectly intensify or manipulate these circumstances. There is reason to believe that the influence storms have on currents might bring the algae closer to the panhandle, thus bringing the bloom here. The real concern, however, is the runoff in the wake of major storms.

After any major storm, water sources become extremely polluted. Plastics, human garbage and vast excesses of dead plants and animals all flow into the lakes, rivers and oceans. Compound that with the shift in water level and cross-contamination of normally isolated water sources and an outrageous amount of garbage makes it into the bay, and it can spell disaster.

“Red tide is triggered by algal blooms that are caused by changes in water chemistry and available nutrients,” second-year and Marine Biology AOC Po Henry explained. “Hurricanes come through and do two notable things: they stir up sediments and cause storm surge. The storm surge brings in pollutants, like fertilizers, while the stirred-up sediment allows for an increase of nutrients in the water. Both of these things can change the nutrients in the water that can go on to create algal blooms.”

Red tide is disastrous for Florida by every possible metric. Several Catalyst staff members have found themselves at the beach and been forced to leave within minutes, as the red tide makes breathing so difficult and strains the lungs so much that it’s not livable. Beyond the economic and social impact of our beaches being rendered uninhabitable, it also destroys local wildlife. Countless dead fish lined up on the shoreline is a common sight during the increasingly frequent and intense blooms of red tide in the bay. It also makes eating anything harvested from areas suffering from red tide extremely dangerous. Several local counties, including Sarasota and Manatee, have explicitly and in no uncertain terms advised people to avoid the beach entirely if at all possible, going so far as to recommend that people wear masks whenever they’re on the beach.