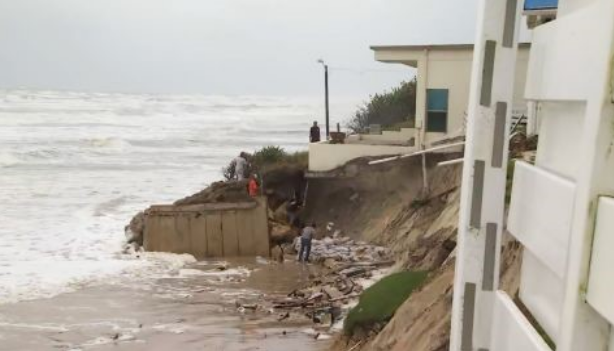 A Wilbur-by-the-Sea beachside home was left on the edge of a sandy cliff after rough surf and storm surge caused by Tropical Storm Nicole washed away about 20 feet of sand. Picture credits to ClickOrlando.

The New College student body remembers Nicole as a cloudy day in which they wondered why school was canceled. However Daytona, FL got the brunt of this rare November tropical storm-turned-hurricane. Landing on the east coast as a Category 1, it rampaged through the Volusia area causing flooding, property destruction and the continued erosion of Florida’s coastline. The sultry storm caused quite a mess as the Volusia County property appraisers submitted a damage assessment of Tropical Storm Nicole with damages totaling $522 million.

Tropical Storm Nicole was also found to have killed five people in Volusia County with downed power lines, a fatal car crash and one man drowned on a boat—a hallowing reminder of the destruction that Florida is poised to face at an increasing rate in the future. With Nicole cutting the power to over 300,000 Floridians and killing several, it is almost unbelievable that Nicole made landfall in Vero Beach, FL as a Category 1 hurricane.

Condominiums and beachfront properties accounted for a majority of the damages—almost 50 beachfront properties that were deemed unsafe to return to following Nicole. Daytona’s position on the coast and propensity for beachfront property made the perfect conditions for a tropical storm to cause massive amounts of damage. CNN attributes coastal erosion as to why this storm was so impactful in Daytona. Tropical Storm Nicole’s high tides and storm surge, peaking at six feet high, were more than enough to erode the coastline and damage the seawalls surrounding Daytona Beach’s coast.

With Hurricane Ian hitting Florida just about eight weeks ago at the time of this article’s publication, the Florida coastline has suffered coastal erosion and the wearing down of seawalls at an increasing rate.

“Due to global warming, global climate models predict hurricanes will likely cause more intense rainfall and have an increased coastal flood risk due to higher storm surge caused by rising seas,” NASA reported this summer. “Additionally, the global frequency of storms may decrease or remain unchanged, but hurricanes that form are more likely to become intense.”

In a WESH interview, Volusia County Sheriff Mike Chitwood spoke on the severity of the storm on the east coast: “Right now, ground zero is here.” With Fort Myers primarily ravished by Hurricane Ian, and now Daytona Beach residents having the ground being eroded from their very feet, 2022 has been a terrible year for everyone living on the Sunshine State’s coast.

With the deaths from Hurricane Ian included, there have now been 114 deaths this year in relation to hurricanes. As of 2021, the Orlando Sentinel reported that over the last 30 years, 500 people had been killed in hurricanes in Florida—meaning that for this year’s hurricane season, about 18% of all hurricane-related deaths in Florida over the span of 30 years have occurred over the past few months. With that number in mind, it puts into perspective the increasing environmental precarity of living on Florida’s coast.

This unique semester, with two breaks from storms now, has indicated that, as we feared, climate change has begun to make hurricanes more dangerous and more frequent. More than ever, preparedness is necessary—especially for students on the west coast of Florida. New College’s campus remained lucky and relatively undamaged during Hurricane Ian and again after Tropical Storm Nicole, but the future’s increasing climate problem must keep Floridians on their toes and ready to evacuate should the time come.