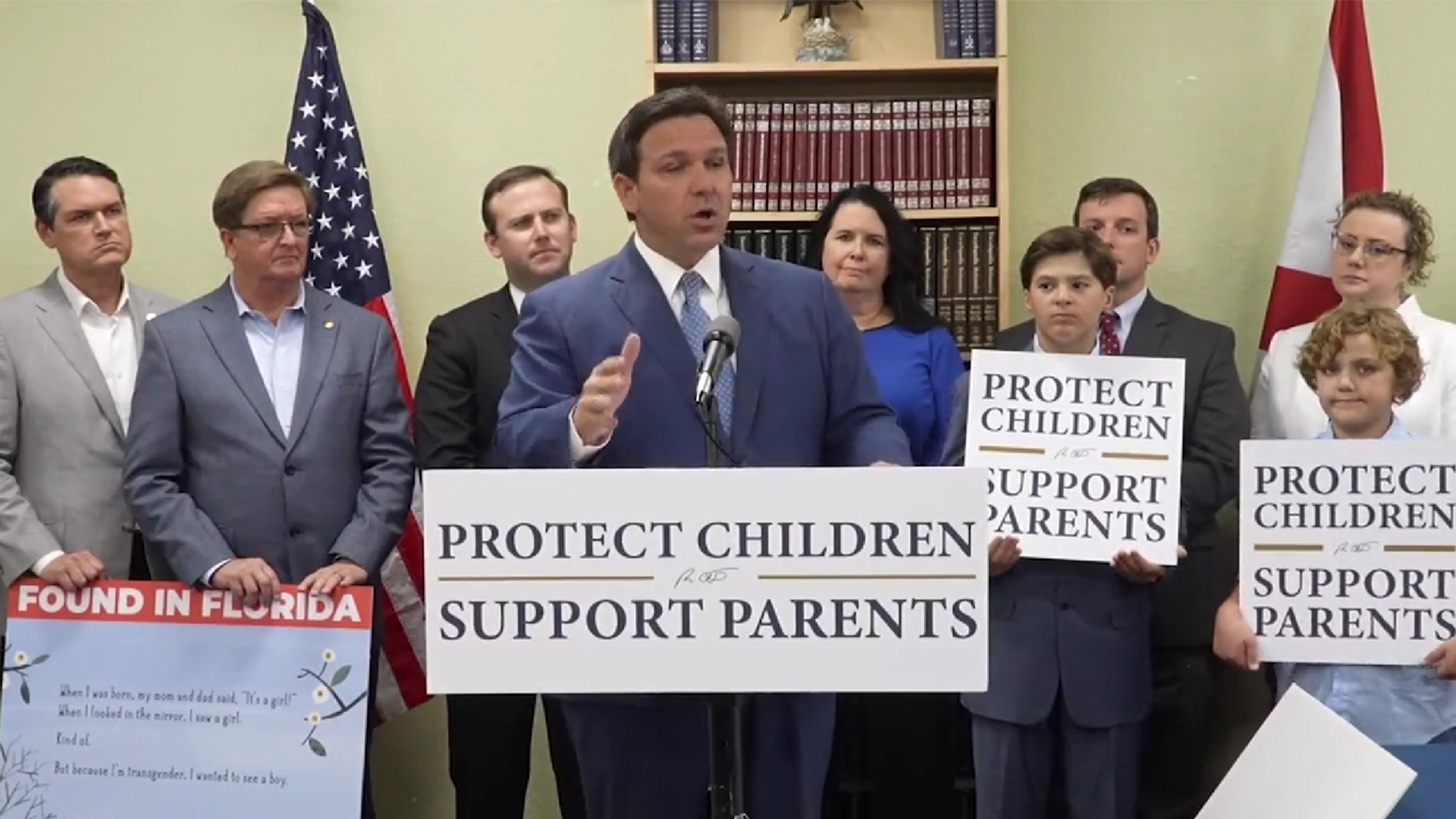 A photo of Florida Governor Ron DeSantis speaking at a podium adorned with the sign, "Protect Children / Support Parents," a manta that has guided much of his recent political career. But how well does it translate to the actual legislation DeSantis has put in place? Photo courtesy of Flickr.

In July, after passing the Florida House and Senate and being signed into law by Governor Ron DeSantis, the heavily discussed “Stop WOKE” act or House Bill 7 (HB 7) was at last a written law.

New College professors were off contract at the time, and thus concerns about college affairs were not being addressed officially as an institution. Nevertheless, faculty members nervously teetered on the edge of their seats as they awaited guidance from the college about how to direct their classes in the coming Fall 2022 semester.

While “Stop WOKE” has made many headlines, often paired with the “Don’t Say Gay” bill or the term “Critical Race Theory,” the actual nature of the law has remained purposefully vague.

In essence, the bill restricts K-12 education, businesses and public universities from providing or requiring any instruction that would explicitly or implicitly suggest that any person is superior, privileged, oppressed or disadvantaged, simply by merit of their race or sex.

The bill also revises some of the terminology for inclusion statements used in education, switching from “gender” to “sex” and “ethnicity” to “color.”

But the wording, and general principle of the bill is still incredibly ambiguous. So far, the state has not given any specifications for higher education on what they can and cannot teach, nor has any information been given on how this law will be enforced, leaving universities vulnerable under strange new circumstances.

Professor of Physical Chemistry Steven Shipman is one such person left to grapple with what HB 7 could mean for their career, as they are also the leader of New College’s Faculty Union—which operates with the United Faculty of Florida (UFF).

“UFF produced some legal analysis and guidance that we distributed to all the faculty, so not just union members, but to everybody,” Shipman said when asked if any guidance had been provided to faculty members about HB 7.

The guidance Shipman was speaking about came in the form of a three-page document, which begins with a call to action before going into the rest of the guidance given on HB 7:

“Many of HB7’s prohibitions derive from cartoonish representations of post-secondary instruction, meaning faculty can reasonably navigate them with an acceptable level of risk by using the strategies described below. Remember: the best solutions to HB 7 are political and collective actions, such as local demonstrations on campus or at a supporter of the law’s home office, and at the ballot box. Collectively, members should discuss and plan actions to push back and fight for our union’s principles.”

The guidance itself explains first that “the law’s enforcement mechanisms are focused very much on feelings and perceptions of objectivity.” Thus, it is ultimately up to the professor’s discretion to determine how much risk they are willing to accept in a given class.

“The UFF guidance, basically, says there are three routes you can take, and they categorized it as low risk, medium risk, high risk,” Shipman said.

“1) Don’t teach or address any of the topics prohibited in HB 7.

2) Remove all posters and art in your office that ‘endorse’ positions prohibited by HB 7.

3) Don’t speak to any of the topics addressed in HB 7 with any student groups you may sponsor.

4) Don’t guest lecture on any Florida campus about any of the topics addressed in HB 7.”

Shipman describes the low risk route as “basically avoiding any topic that might be controversial.”

Following low risk protocols means avoiding topics about sex, gender, race, ethnicity, sexuality or anything else that could be seen as “woke indoctrination.”

For Shipman, following protocols has been easy. In their Chemistry and Environmental Science courses, they said “there’s been no change as a result.”

“[But] in courses that are kind of intrinsically more connected to studying race, to studying dynamics in American society, like Sociology—I think it’s a much harder thing to grapple with,” Shipman said.

The reasonable (or medium) risk route is “in most cases, doing what you’ve already done,” Shipman explained, but that professors also need to emphasize transparency in order to avoid “endorsing” certain topics.

“And then, of course, the high risk route is being provocative, which, you know, if you think you would make a good test case, go for it,” Shipman said. “That’s not where I am right now. And I don’t think that’s where most of our faculty are.”

After the UFF distributed their guidance, more state college institutions released their own guidance—including FIU, FSU, UCF and UF—which ultimately was distributed to NCF faculty to help inform their decisions as well.

Former General Counsel David Fugett also met with faculty and staff to explain the law and answer faculty members’ questions on how they should teach under the new circumstances.

After a variety of guidance from different institutions and experts, it became up to the professors how they would proceed.

Associate Professor of Sociology and Theater, Dance and Performance Studies (TDPS) Queen Zabriskie explained that when she read over the guidance, she didn’t feel the bill actually applied to what she taught.

“So for example, I don’t teach that members of one race or color, national origin or sex are morally superior,” Zabriskie emphasized. “Drawing on the work of a number of different scholars, like Patricia Hill Collins, I teach about the social construction of race and how racism intersects with other systems of oppression to impact us all in complex ways.”

One of Zabriskie’s classes this semester is Intersectionality, which focuses on the complex ways different social identities—like gender and race—intersect and interact with the cultural context a person may exist in.

Zabriskie explained that in that class particularly, it has been important to set class agreements and expectations around dignity.

“In this class, everybody has equal and inherent worth, because we are human beings,” she continued. “This definition of dignity comes from a book titled, ‘Belonging through a Culture of Dignity: The Keys to Successful Equity Implementation,’ which I learned about from other local educators navigating this new legal landscape. It was so important to make sure I stated this explicitly, even though this is an assumption that I’ve operated with previously, in order to make sure I am able to create an inclusive and equitable classroom in this new legal context.”

“I am teaching in a particular field that has had a conversation over time,” Zabriskie elaborated. “And so to not teach where the field is in that conversation, despite the tensions, would be doing a disservice to students.”

Zabriskie emphasized that she wanted students to be able to comfortably and confidently tackle the tough, and sometimes uncomfortable, topics in order to prepare them to succeed in our diverse and global world.

“I think the concern is—generally, from everybody—their concern that they want to be able to teach their area of expertise in a way that they want to teach,” Fugett said, one of the many people faculty looked to for advice on how to tackle HB 7. “But that seems to be the biggest concern from the faculty, and possibly the chilling effect that it could have on how they teach. And my advice on the fact is to teach how you’ve always taught on what you’ve always taught. Just continue to do the things that New College professors do, and that’s not bullying, harassing or forcing a viewpoint or a belief on the students.”

Performance funding is, as Fugett explained, “certain metrics that are approved by our Board of Trustees (BOT) and by the Board of Governors (BOG), that if we meet we can get millions of dollars for New College.”

Losing this money can be a huge hit to New College’s budget, as seen this last year when the school didn’t meet its retention metrics.

But it’s more than just the school’s budget that’s at risk.

“It’s creating a chilling effect,” Zabriskie said.  “Shutting down the conversation, and finding ways to keep people from learning about these difficult truths, these difficult histories [so] that we won’t be able to actually effectively work together”

Shipman also spoke about the “chilling effects” of the bill, even in Environmental Studies which may appear relatively unaffected at first.

“[I’m] thinking carefully about how I discuss things like climate change, even though that’s not in the bill, and that kind of illustrates the problem, right?” Shipman asked. “Because, the law says nothing about that. But there’s something in the air, about controversial topics. And so I’m thinking a little more carefully.”

New College is only one of many institutions that are affected by HB 7, and some affected individuals have banded together to file a lawsuit against the Florida BOG over the bill.

The Legal Defense Fund—one of the supporters of the lawsuit—explains that the lawsuit “charges that HB 7 unconstitutionally violates the First Amendment by imposing restrictions on speech and information in college classrooms, and is void for vagueness under the Fourteenth Amendment.”

“Additionally, it argues the Stop WOKE Act violates the Equal Protection Clause because it was enacted with the intent to discriminate against Black educators and students,” the statement from the Legal Defense Fund continues.

This isn’t the only lawsuit which has been filed against the bill, but none have been effective in drastically changing the law. One recent hearing on Oct. 13 of two challenges to the law resulted in the judge saying that “We believe in academic freedom, so long as you say what we want you to say. That sounds like something George Orwell wrote.” There has been no conclusive ruling yet.