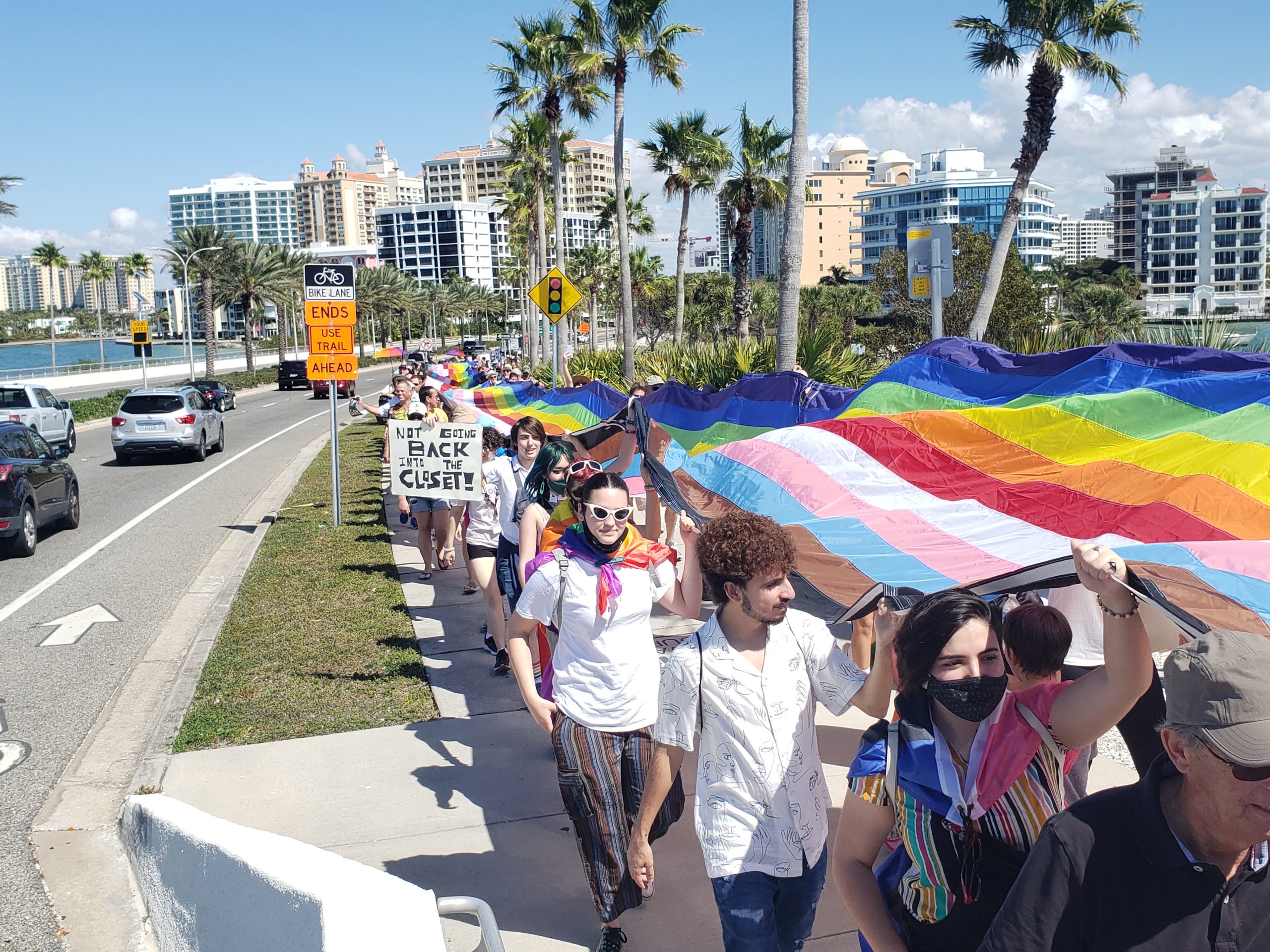 Protestors marched up the John Ringling Bridge at 1:30 p.m. on Feb. 27, each holding up a 700-foot long pride flag, some also carrying signs.

Florida House Bill 1557: “Parental Rights in Education” quickly gained the nickname “Don’t Say Gay Bill” by opponents and LGBTQ+ activists when it was first proposed on Jan. 11, 2022. On top of requiring school district boards to “reinforce [the] fundamental right of parents to make decisions regarding upbringing & control of their children,” it also prohibits “classroom discussion about sexual orientation or gender identity in certain grade levels” and authorizes parents who feel that this right has been violated to sue their respective school district. Various protests have been sparked across the state in response, including one organized by Project Pride SRQ (PPSRQ) on Feb. 27 on the John Ringling Bridge, uniting Sarasota and Bradenton students and community members under the chant: “We say gay, not going away.”

The bill is sponsored by Rep. Joe Harding (R) and passed 69 – 47 in the Florida House of Representative on Feb. 24. It would ban any instruction on sexual orientation or gender identity for elementray, middle and high school students, and would ban conversations about the topics altogether in classrooms at third grade and below. Additionally, Harding recently withdrew an amendment from the bill recently on Feb. 22 that would have required schools to tell parents if their children identified or were suspected to identify as a member of the LGBTQ+ community.

It is one of several pieces of legislation recently passed in Florida that revolve around maintaining school environments, joining the “Stop WOKE Act” also passed on Feb. 24, which would limit how classrooms discuss critical race theory.

House Bill 1557 was opposed by every Democrat representative and seven Republican representatives on Feb. 24, and the bill is opposed by 49% of Floridians according to a poll released on Feb. 22. Similarly, President Joe Biden called the bill “hateful” on Twitter and promised the LGBTQ+ community that his administration will continue to fight for their protection.

The PPSRQ Say Gay rally had an estimated turnout in the hundreds, and culminated in each particpant holding up a 700-foot long pride flag, extending down the length of the John Ringling Bridge. Rally participants ranged from New College and Ringling College of Art and Design students, to parents and their middle and elementary school-aged children, to various community activists and LGBTQ+ community members.

“We’re here because we’re tired of people telling us what we need to do,” Bradenton resident Ginger Williams said, wielding a sign that read Stop Targeting Kids.

“As a lesbian woman and as a future educator, I think it’s very important that, not only do we get to tell our stories, but that our students get to tell their stories and that conservatives don’t censor our speech and our way of being,” third-year Natalie “Nat” Kornblum said, lifting the flag up alongside a handful of other New College students.

The bill reached a Florida Senate committee on Feb. 28. The hearing, which began at 10:30 a.m., featured over an hour of public testimony from those in attendance against the bill, including students who traveled upwards of seven hours from South Florida.

“We have the opportunity to soften this…to not impact our neighbors in the way that you’ve seen them impacted today,” Brandes said during the hearing. “I am not going to support the bill today in hopes that we can find a way to love our neighbors.”

This viewpoint, however, was unpopular among the majority of the members, as Sen. Dennis Baxley (R) was notably quoted as calling himself “a guy who doesn’t hate anyone,” while in the same hearing said that a child with “two mommies” was in the same kind of “dysfunctional” environment as a child with an “abusive father” or “drug addict” as a parent.House Bill 1557 passed 12 – 8 and is now headed to the Senate. If it passes through the Senate, it will fall into the hands of Gov. Ron DeSantis (R), who has indicated in the past that he is in favor of the bill. At the time this article was written, it is unclear what date the bill will reach the Florida Senate, but it was placed on the Senate calendar on Mar. 1 for a second reading.