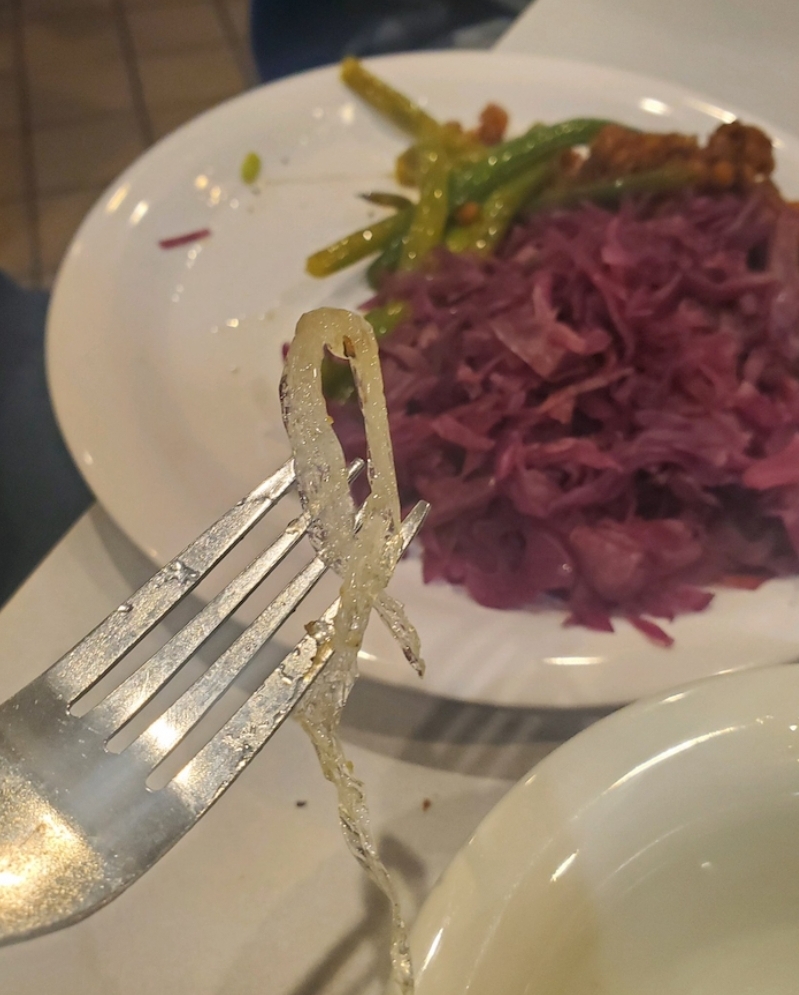 A piece of melted plastic found in a student's green beans at Ham. Photo provided by Telle Fugett.

There are numerous positives to attending a university as small as New College: the small class sizes, walkable campus and close-knit community are readily listed among the benefits. But, for students, one of the most impactful consequences of this atomity is the highly limited food options offered on campus.

Currently, students have two food options to choose between for their meals: the Hamilton “Ham” Center buffet and the Boar’s Head Deli, both operated by Metz Food Services. In the past, New College could boast a slightly more varied pool of eatery options: the student-run café Four Winds offered healthy, refreshing options in its heyday. But for the time being, Four Winds is not much more than a memory held in the minds of current fourth-years since it was shut down in 2019. Although discussions have been had and plans made for the reopening of the space, there is no firm date for a reopening.

Complaints voiced by students about this limited spread of offerings, and general grumblings around the overall quality of Metz’s food offerings in Ham have resonated for years. In the light of this long standing sense of disappointment, frustrations have also been raised surrounding the perceived differences in quality, freshness, taste and seasoning between the dishes served by Metz in Ham and the Metz that is catered for other events, such as Administrative, Admissions, or the Foundation affiliated events.

Beyond this, concerns have been raised about what happens to the often large amounts of leftover food at these catered events, while students often leave Ham dissatisfied.

In response to a question regarding these complaints, General Manager of Dining Services Bill Moore responded in writing.

“Our guests must understand that we do not serve leftovers from previous meals or catering events,” Moore said. “We also stay away from serving leftovers because it is not safe for our guests. Cross-contamination is very serious, and your safety is of the utmost importance to us.”

Students who work for groups on campus who often catered Metz, such as admissions and campus space scheduling, readily voiced beliefs that leftover catered Metz food is reused in Ham for student’s meals.

“I’ve worked a lot of admissions events since my freshman year,” one student said, whose name has been withheld with confidentiality. “In the four years that I’ve worked in that office, all of the larger events are always catered by Metz. Usually, the food served at the catered events is different from the food they serve in Ham. After every event, without a doubt, throughout the following week, I will always see the same foods offered in Ham that are never offered at any other times.”

Offering an example, they recalled that at many admissions events, burger and portobello mushroom sliders are served, only for the same dish to turn up in Ham later in the day.

“That [the sliders] is never served in Ham other than right after the admissions events—I know they are left over from that [event] because that is the only time they are ever served,” the student explained. “I think it’s pretty funny, because the food from the catering is already paid for, and if it is sold again, they are making twice the money on food that is being sold twice.”

Although this belief about the re-use of food is ultimately speculative, it has been echoed by other student employees as well.

“Students are constantly served visibly old food in Ham, which despite being a health concern is disrespectful to students,” a second student employee said, whose name has also been withheld for confidentiality.

When asked what truly happens to the leftover food from catering events, Moore said that some food items are donated.

“When possible, and within the ServSafe® standards, some catered items not served buffet-style, for example, are packaged, stored, and donated to area non-profits such as the Salvation Army and St. Wilfred Soup Kitchen,” Moore explained.

Regardless of whether food served in Ham is really leftover from these catered events, the sentiments expressed by students speak to a lack of trust in the quality of food service they are served on a daily basis. Food Representative and thesis student Telle Fugett said that there was “absolutely and without a doubt” a difference in quality between food served at catered events and in Ham, adding that “I know that’s definitely a problem, and I know they reuse a lot of food.”

Fugett recalled a conversation with a student who had approached her about their difficulties with severe food allergies and cross-contamination in regards to the food served in Ham.

“They were saying how they wanted to choose a school with decent food because of their severe allergic dietary restrictions,” Fugett said. “The food that they saw at the catering events was so different. They were promised  so many accommodations for everything, which can happen at those catering events. But they saw the catering there, and came to New College under this impression, and faced a lot of issues with this, as well as food insecurity and not trusting Metz anymore.”

Fugett explained that this “false advertising” issue is one that came up often in her role as Food Representative, with her receiving many complaints along similar lines.

In response to questions about the quality of food offered in Ham in general, Moore maintained that Metz’s goal is consistently to provide quality food for all guests, offering that “the variety and amount of food you get in HAM, for the price you pay, cannot be matched by any local or national restaurant.” He also emphasized that the Ham Executive Chef Peter Chea, was working with the current menu to keep “things exciting and, most importantly, fresh in taste and quality.”

Although Chea did not offer a response to requests for comments over email, Moore spoke highly of the “creativity and knowledge” that Chea brought to the Metz team.

“In the short time that Chef Peter has been with us, we have seen an increase in meal satisfaction, and we anticipate his new menu for the spring semester will continue to delight,” Moore said.

Unfortunately, this is a hopeful attitude that many students do not seem to share. First-year Caroline Young invoked descriptors of a “flaccid” salad bar, while another student, who wished to have their name withheld, bemoaned the “cold baked potatoes” and “the blandest mac.”

This student also voiced more serious concerns about the health standards of food served, wondering whether quality checks were truly followed through on due to the amount of time they had thrown away chicken for being pink. Another student, who also wished to withhold their name, noted that “they tend to mislabel food, which worries me sometimes. My expectations for Ham food are quite low at this point.”

Fugett spoke to a variety of incidents around food safety, including melted plastic being found in green beans, as well as multiple instances of pink chicken being reported to her. Another incident this semester involving “worms” being found in student’s pre-packaged Metz salads. Fugett noted with confusion that she was told by Bill Moore that he had shown an inspector from the Department of Health the picture of the worm and the pink chicken, but that this did not raise any red flags for the Department of Health.

“Your safety is of the utmost importance to us,” Moore said, further commenting on the health standards of food served by Metz. “That’s why we continue to follow many COVID-related protocols … including having sanitation stations above each concept (Main Plate, Green Scene, Bravo!, etc). Our team members change out serving tongs every half hour, in addition to keeping each station clean.”

Students have long questioned why they are not served the same type of (perceived) higher quality food in Metz that is serviced in Ham. Moore offers an explanation: “One of our largest revenue sources is your meal plans.” He says that this amount typically stays fairly fixed, allowing Metz to spend a consistent amount per-student. However, different catered events similarly work off of a variety of differing budgets and menus. Moore illustrated that while some groups permitted Metz to spend an average of $8 per person, other groups could go up to $50 per person.

“Our per-person budget is the difference…between an admissions event for prospective students and a foundation dinner for donors and benefactors of the college,” Moore explained.

This being said, Moore asserted that while varied budgets allowed for varied menu items, all menus shared the same base of spices, herbs, vegetables and stocks.

Another student, who wished to withhold their name, did not appear to agree.

“At admissions events, Metz stays true to their title as a catering service; the food is displayed in a presentable manner, and there is quite a bit of variety,” the student said. “I’ve seen cheese and cracker spreads, grilled fresh veggies and decent looking hummus and fresh fruit.”

When discussing Ham food, however, the student offered a scathing response: “The food served to students in Ham remains up to the discretion of the health department as to whether it’s safe for consumption.”

They continued by detailing that the food is often displayed in ways that are unappetizing, with veggies looking “dull, limp, and grey, if they are even fully cooked at all.”

“The fruit often has that weird film over it, and the only fruit option is often a fruit blend that just tastes kind of like ‘fruit?’” the student observed. “An allusion to fruit, if you will.”

Fugett reflected on the frustration of advocating in her role as Food Representative.

“I know that ‘gaslighting’ is a term that is overused a lot, but it [her Food Committee meetings] felt like that,” Fugett said. “I had brought up students getting sick after eating Ham food and food poisoning cases. The response I got was pretty much, ‘Well, that’s not what’s happening because food poisoning takes 24 hours to set in and students are throwing up right after their meals.’ But students are relying on it as their primary food source. They could have gotten sick from something yesterday, just hitting now.”

She expressed exacerbation over this attitude, saying that she was tired of hearing from administrators that they “eat this food all the time, so it’s fine.”

One final student, who wished to withhold their name, spoke poignantly to the emotional and psychological weight of food relationships on college campuses.

“Given that we only have one food option on campus, a monopoly which Metz holds, we can’t get fresh food on campus or a decent plate of warm food to keep us going during our school day,” the student said. “In no world should Ham food be so god-forsakenly nasty that students go in, swipe, and leave empty handed, heading off to class and work with nothing in their stomachs.”

“I’d say without a doubt that the abysmal quality of food on this campus is actively contributing to food insecurity on campus and eating disorder culture, as well as complicated relationships with food amongst our student body,” the student argued. “It’s more than kids bitching and moaning, Metz needs to be held accountable for starving kids on this campus.”