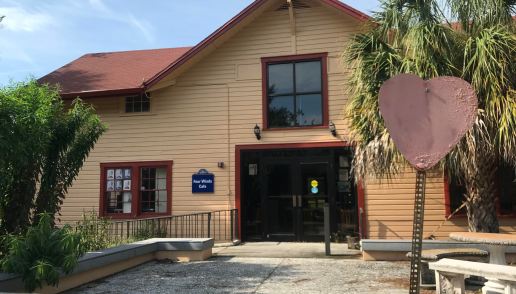 The student-run café by the anthropology lab, Four Winds, has closed. The Four Winds has been a fixture of the campus since it was founded in 1996, but over the past year its future became uncertain. From its origins as an independent study project (ISP), the Four Winds was student run until Aug. of 2019, when an outside manager was brought in an attempt to mitigate its heavy losses. Despite the changes made, it was untenable to continue operations into the Spring of 2020. Not only does the loss of Four Winds mean one less food option for Novo Collegians, it means one less space where students can gather.

The Four Winds became a major issue in Jan. 0f 2019, when the New College Student Alliance (NCSA) suddenly announced that it would not be funding the Four Winds going forward. Four Winds had long been a major money loser that the NCSA had countenanced with regular bail-outs. From 2016 through 2019, the Four Winds received over $45,000 from the NCSA. As student population fell, the NCSA budget shrunk, and it became too costly to maintain. The Four Winds had never once turned a profit in its 23 year run; its losses ranged from a mere $6,587 in 2004 to $41,817 in 2012.

“I can’t think of a single year it was ever profitable,” Eshel Rosen, thesis student and NCSA Vice President of Relations and Financial Affairs, said. “It’s not really a profit-seeking organization; it started as an ISP. It started as a community driven space. I think that’s what the end goal going forward should be.”

The Four Winds halted operations in Jan. 2019 as the NCSA could no longer commit to paying the $5,000 to $10,000 expenses it would accrue every semester. A committee was formed to determine what the Four Winds future could look like. Traditionally the Four Winds had been run by alumni managers who would serve only one-year contracts. Under the new plan, Metz ran the Four Winds, with a manager being brought in to serve in a more permanent capacity. Additionally, the food selection would be drastically cut down. In previous years the Four Winds had served made-to-order hot meals like paninis or salads, the new Four Winds was limited to serving grab-and-go foods like bagels. The new rules that Four Winds needed to operate by lead to a different experience than in years past.

“Having all the corporate rules was very hard,” Four Winds employee and thesis student Ella Denham-Conroy said. “We wanted to use the reusable cups, or any of the equipment in the kitchen. But we had to serve everything on paper plates with plastic utensils and give bagels for people to heat up themselves. It was very different; it was kind of frustrating because of all that.”

Despite the leaner service and menu, Four Winds was still unable to perform up to the hopes of the NCSA and Metz. While it was not expected to turn a profit, it continued to hemorrhage money, losing $15000 throughout the Fall semester in 2019.

“The reason we had to close in the end was because we were only making an average of around $60 a week,” Denham-Conroy said. “And there was hardly anyone coming in, which I’m sure had to do with the fact that it wasn’t really the Four Winds that everyone knew. It was just kind of empty inside.”

In the immediate future, Four Winds will not be operating as a café, though the NCSA and administration both hope to preserve the space as a community nexus for students.