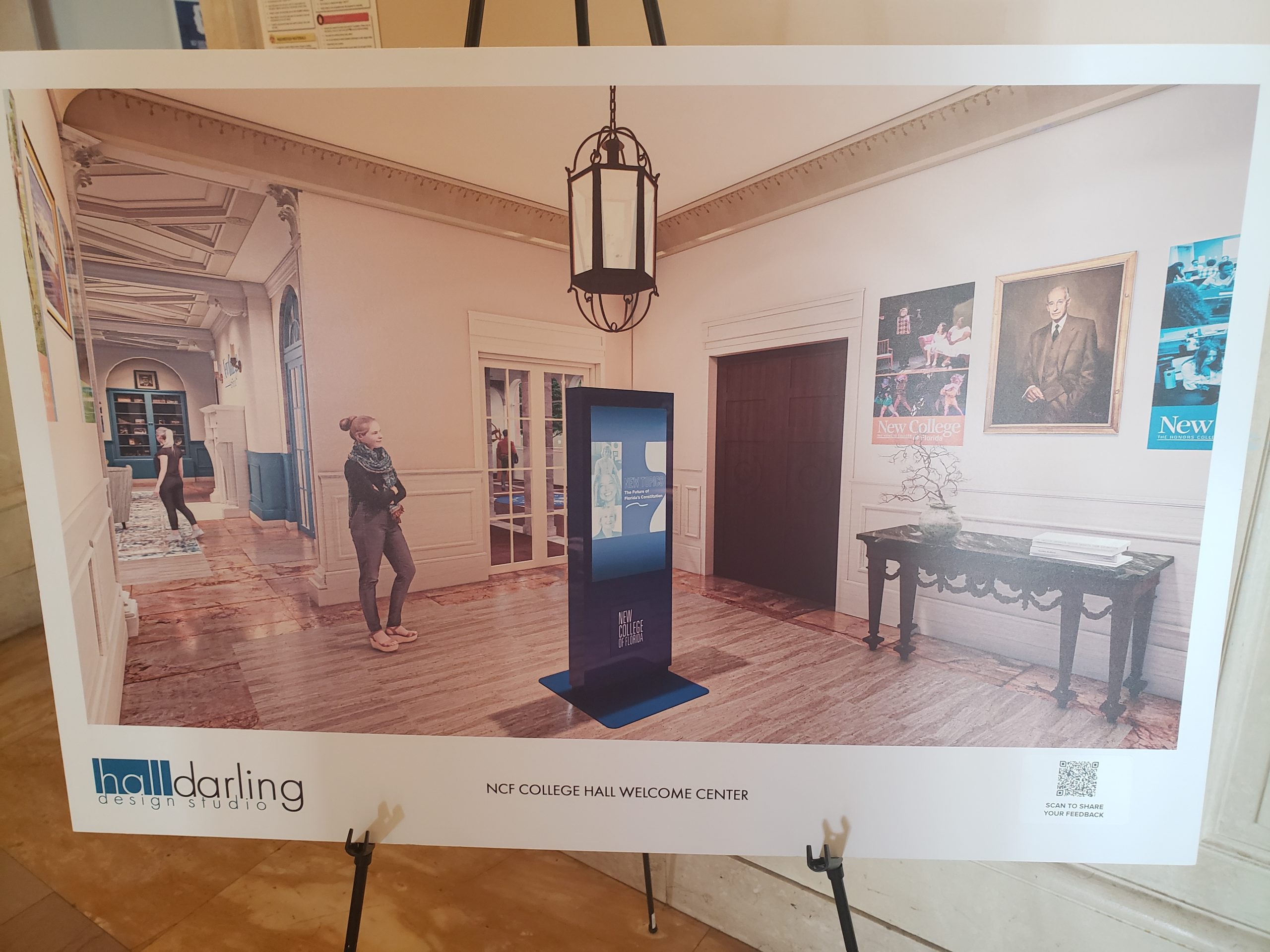 For a prospective student taking an on-campus tour, College Hall is the very first impression they get of New College—that shadow of the grand opulence once owned by Charles and Edith Ringling, now a space for faculty and Admissions personnel to fill out paperwork underneath painted ceilings and by a stunning ocean view. For many, it is the campus’ most beautiful and iconic location. For administrators and Admissions, it’s one of the most lucrative locations as well—a START Center newsletter sent out on Nov. 23 explained that College Hall “serves as the starting point for hundreds of campus tours each year, and our data tells us that the campus tour is a key factor in many students’ decision to enroll at New College of Florida.”

So, when posters depicting artist renderings of renovations to College Hall’s main reception area and patio area on the first floor—often referred to as the “Welcome Center”—it wasn’t automatically clear what necessitated these changes in the first place. Both Vice President of Finance & Administration Chris Kinsley and Assistant Director Facilities Planning & Construction Itza Frisco sat down with the Catalyst to provide further information on the project.

Kinsley explained that the earliest brainstorming stages of these renovations began in Spring 2022 in collaboration with President Patricia Okker, who asked the question: how can we reimagine the Welcome Center to better reflect the “New College story?”

“We had visited Ringling College some months ago, and when you go to Ringling, they don’t actually have a Welcome Center per say, but they have many exhibits of student artwork, they have examples of work that alums are working on,” Kinsley said. “And of course it is a college of art, but the President thought, ‘How can we bring that sense to the Welcome Center?’ As in, here’s the type of work you might do as a student at the college. Here’s the type of jobs, careers, teaching you might do once you graduate.”

Some of the proposed renovations include adding a Welcome Desk staffed with Student Ambassadors and Admissions personnel and implementing the New College logo and other “true blue” insignias around the area—like a blue wall reading “Welcome Future Leaders,” for example. Additionally, the artist renderings show the mural by the staircase painted over, and proposes that student artwork could be featured along that wall and in the patio area instead.

Following this initial spring tour, stakeholders including Facilities, Admissions, Communications & Marketing and the New College Foundation were consulted about the potential renovations.

For the artist renderings seen above, the college turned to Director of Operations Fred Koenig from local Hall Darling Design Studio, an architect and a firm that New College has worked with multiple times. According to Frisco, Koenig has aided New College previously with structural renovations to College Hall, Cook Hall, Robertson Hall and Caples Mansion.

“He’s a historical preservation architect,” Frisco elaborated. “They [Hall Darling] have always been the ones that we turn to when it comes to our historic buildings. We don’t just pick any architect because of the historic nature of the buildings.”

Funds for these renovations will come from a carryforward reserve, approved by the Board of Trustees (BOT) and totaling up to $200,000.

“Now that we are further in the project, I think the cost is going to be more,” Kinsley said. “I think we’ll work with the Foundation [and] the task force working for this project, and we’ll see if we can garner some support, maybe from people of the college to help offset some of the costs of the project.”

These renovations were originally slated to occur during the 2022-2023 winter break and the Independent Study Project (ISP) period, but that due to the lack of heating in College Hall and various hurricanes that have disrupted the semester, the project has been pushed back to Summer 2023.

When asked about the motivation for these renovations, Kinsley reaffirmed the role that College Hall plays in putting the campus’ best foot forward for touring families.

“Those on-campus tours are one of our most effective means of converting students to want to come here,” Kinsley added. “Some places, it’s all about the online [tours], but if they come here physically and take the tour, it’s like double digits that the student will actually apply, be admitted and show up.”

With this in mind, Kinsley also argued that College Hall doesn’t currently offer any concrete information or visuals that reflect New College itself.

“When the tours are there, it’s fine because you’re getting that experience, there’s someone in-person to explain everything,” he continued. “If you just kind of show up, it doesn’t explain who we are, where we come from, what are the opportunities. There’s no real signage, there’s none of that. We want to try and bring some [so] even if there’s no human being there, you still get that sense of, ‘Here’s what New College is about.’”

Kinsley was able to provide the Catalyst with over 100 anonymous comments submitted through a feedback form on the renovations. Some of the recurring comments and suggestions included a desire to preserve the history and aesthetic of the building—especially the mural alongside the staircase in the main lobby. Several commenters wrote that the eclectic and unique style of College Hall and of the mural specifically were key factors that drew them into the school. Several suggested that College Hall does not need to be aesthetically redesigned or altered in any way.

More broadly, a majority of commenters also critiqued the proposed renovations for making College Hall look “bland, boring and commercial.” Others suggested that the trendy design will look dated after only a few years, whereas the current design that leans into the building’s historical roots is more timeless. Further, some implied that these more modern renovations actually dampen College Hall’s impact as a first impression for prospective students by looking too much like other larger state universities.

“They feel sterile and generic,” another commenter wrote. “New College’s appeal is in its quirky nature. When I toured College Hall as a prospective student, I felt at home because of how comforting, cozy, and quirky the building felt. I would not nearly have felt as happy in the building presented here, covered in generic logos and posters.”

This sentiment appears to be shared by some of the faculty who work in College Hall as well, such as Associate Professor of Anthropology Erin Dean.

“College Hall could use some updates, but I am worried about turning it into some kind of generic, ‘corporate-interpretation-of -a-college campus’ space focused only on recruitment,” Dean wrote to the Catalyst via email. “I want it to continue to be a lived-in part of our campus, a space for our community to use every day in academic and social contexts. I would hope the renovation would prioritize making the space more welcoming and usable for current students, staff and faculty.”

Dean also brought attention to other issues with College Hall that have yet to be addressed by these renovations: “There are other projects in College Hall that are important, including making the building more ADA accessible.” Dean’s office is located in the upper portion of College Hall, allowing her to notice issues such as peeling paint and water stains located upstairs from Hurricane Irma in 2017.

Second-year Elizabeth Kufrovich also voiced her opinion regarding the lack of accessibility in the building, especially considering that the staircase is the only way to reach College Hall’s second floor.

“It seems like they [administration] don’t have any plans to address accessibility for students with mobility issues,” she said.

Among commenters in favor of renovations being made to College Hall, recurring suggestions included making the space more welcoming to families on tour by adding more places to sit, improving the lighting and adding the Welcome Desk.

“As a former Admissions Representative and Campus Tour Guide, I fully understand the idea of making the ‘Living Room’ of College Hall more welcoming and a more intuitive welcome center for prospective students and their families,” a commenter wrote. “Frequently families would come into the building and not know where to go next.”

Boynton works in College Hall and frequently offers tours around the building and around campus to families and visitors. She argued that the building’s historical charm is what draws people in and encourages them to attend New College. Boynton concluded her interview with one final suggestion for students: push for change and get involved.

With that in mind, many comments showed their disapproval for any kind of renovation to College Hall, and instead suggested that the money be funneled towards other neglected campus services and facilities.

“I am flabbergasted that we continue to dump wasted money into fancy office buildings and welcome centers, spruce up fancy showrooms, and not once spend the time or effort to get students actually improved living conditions,” a commenter wrote.

“It is irresponsible to make unnecessary renovations when this school is experiencing financial strain,” another added. “You should devote your attention to the dorms, where students have filed multiple complaints about the internet, ethernet and heating.”

When asked how she believes this funding should be spent, Kufrovich was quick to respond: “Start with the Pei dorms.”

“If they could just renovate one of those buildings at a time slowly over the course of a few years, it would really help people feel a lot more comfortable during their first year at New College,” Kufrovich continued.

Some changes have already been made to the renovation plans following this first wave of feedback—notably, the staircase mural will be spared for the time being. Kinsley emphasized that the mural is not actually “historic” to the degree of the rest of the building—it was added in 1996—but acknowledged the significant support in favor of keeping it.

“It really does kind of look like a circus, it’s a riot of colors and patterns and it would not be to many people’s taste,” Kinsley said. “But it’s curious, it’s very different from what we see today. We’re going to keep the mural. There was a lot of support for it, and it also actually saves a few dollars, not painting over it.”

Additionally, even more feedback has been requested. Both Kinsley and Frisco clarified that the original Google Form to provide feedback on the College Hall renovations is still up and active, and that anyone who wasn’t able to leave comments before Nov. 23 are invited to do so once more. They both also suggested that a Town Hall might be held sometime in the near future to discuss the renovations further.

“We’ll be reaching out to the community again as we further develop the designs and concepts, but we are committed to doing the project as a summer project,” Kinsley said. “We know we will probably never please everyone—even on the paint color.”