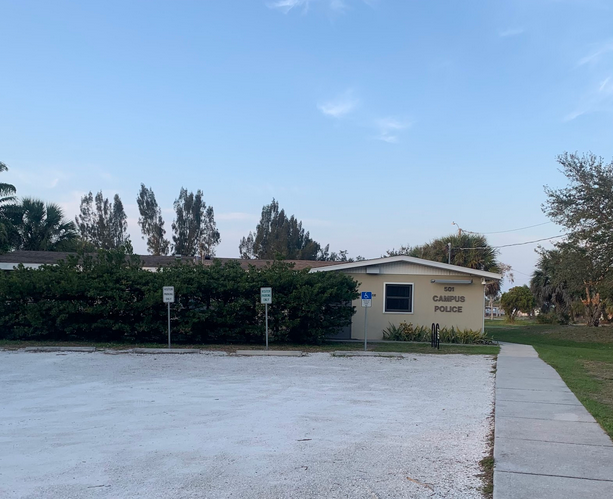 A picture of the Campus Police Department building, known to many students as the “Cop Shop.” Photo by Nat Kornblum.

To college students, campus should be a place to call home. One of the most important elements of feeling at home is feeling safe, a right which was threatened at New College during the last two school years as campus dealt with a series of dormitory break-ins at the hands of off-campus individuals. In response, the Campus Police Department (CPD) issued a series of security improvements, including increased patrolling and more lighting. However, despite the security upgrades, many students understandably remained on edge.

It was announced in an email newsletter sent out by the Student Transcripts and Accounts Records Team (START), on Nov. 30 that the CPD had hired a student dorm safety patrol who would work Fridays and Saturdays from 9 p.m. to 5 a.m. According to the newsletter, “a patrol’s primary responsibility is to serve as eyes and ears in promoting campus safety and to promptly notify the campus police of suspicious circumstances or unsafe conditions.”

According to CPD Officer Alex Stevenson, the student dorm safety patrol position is one that has been present at New College for over a decade.

“The dorm patrol has been utilized within the community for over ten years,” Stevenson said.

The student dorm patrol is responsible for observing the Eastern side of campus, where most of the dorms reside including the Fitness Center, pool, parking lots and Hamilton “Ham” Center.

“[The position] brings us a little bit closer to the student community,” Stevenson explained.

The patrol is to report to the senior officer on duty via radio any suspicious activity. The CPD checks in with the student patrol every hour to verify their location and safety.

According to Stevenson, unsafe conditions could include something as serious as “suspicious individuals” or attempted break-ins, to faulty lights in parking lots. Stevenson also stressed the importance of preventing bike thefts, which have been a recurring problem on campus. At the end of the shift, patrols fill out an action report to list any potential concerns.

While there is currently just one student employed, the CPD hopes to hire more student dorm safety patrols in the upcoming spring semester. The position pays $15 an hour and may be a favorable option for night owls, as patrols work on weekends with breaks throughout the night for rest. Applicants must undergo a background check, as well as have their fingerprints collected and agree to a drug screening before a brief training process.

“We look for a student that is motivated to help keep the New College community safe,” Stevenson said.

This semester, that student is third-year Cyriac Versini, who sat down for an interview with the Catalyst.

“Helping the New College community is something that’s important to me,” Versini said. “I just hope that people see [the CPD] as more of a help rather than a nuisance.”

“If you see someone in a green jacket walking around at 4 a.m. [on Saturday or Sunday mornings], just know it’s probably me,” Versini concluded.