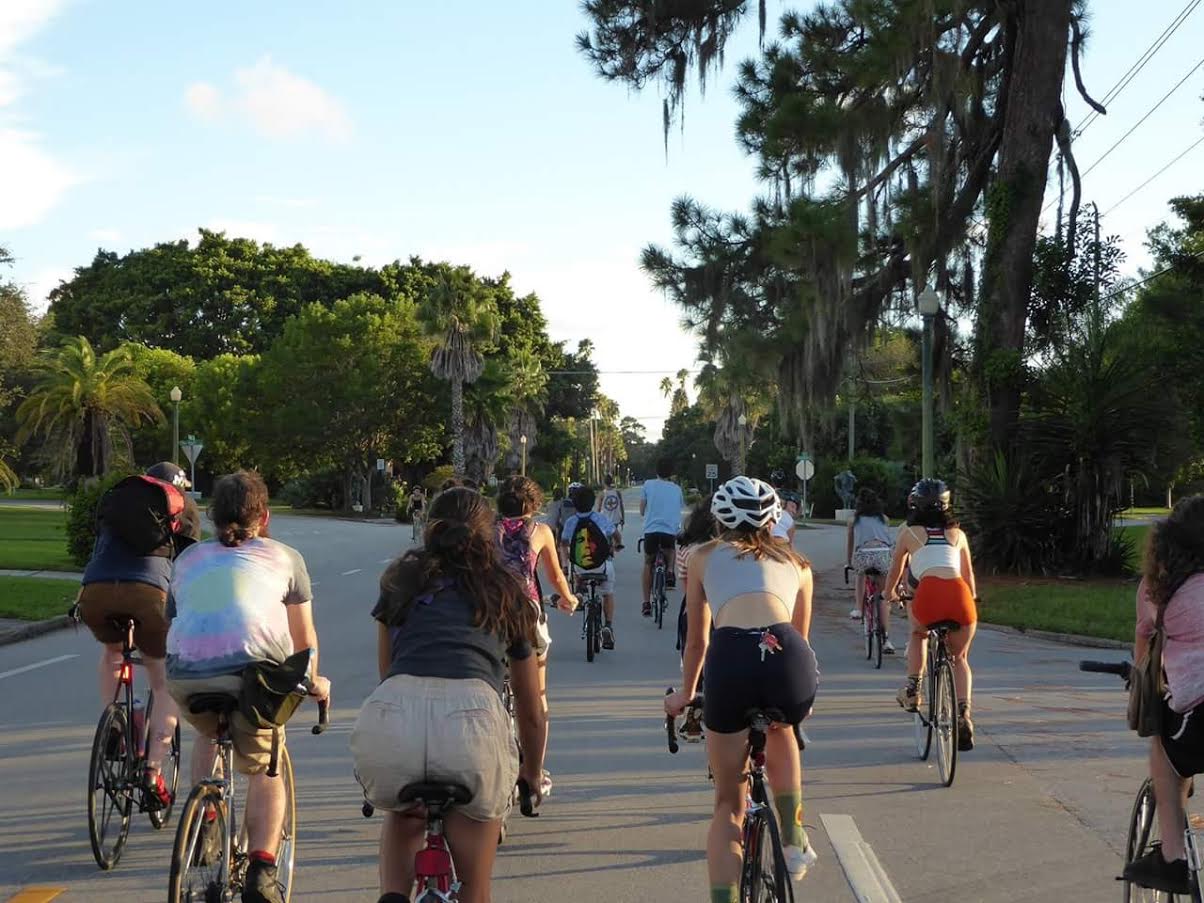 Biking can give students in the Sarasota area over the summer the chance to explore the city. Photo courtesy Cole Zelznak. A live stream of the Sept. 30 Critical Mass, in which dozens of student bikers participated, can be found on the NCF Catalyst Facebook.

Second-year Harrison Reid’s bike was left outside his dorm room on April 25. By the time he had woken up the next morning, his bike – and its cable lock with a plastic coating around it – was gone.

As of right now, Reid has already contacted the New College Police Department (NCPD) who have the bike’s serial number.
“Pawn shops are required to register the serial number of bikes that they take in and the police will notify me if my bike gets pawned,” Reid wrote in an email interview. “It’s just a waiting game right now.”

Reid’s story is, unfortunately, ubiquitous. According to the NCPD, seven bikes have been stolen in this semester alone, which is especially concerning, considering that only 10 were reported missing for the 2015-2016 school year prior. However, if posts made on the [forum] – New College’s frequently-used email listserv – are any indicator, then the number of bikes recently stolen is much, much higher than that.

100 New College students were polled in an online survey for this article. Of the students who participated in the survey, almost three quarters (72 percent) owned bikes. While this survey failed to provide an option for those who had both bike locks and had registered their bike at the Cop Shop, and, instead, simply allowed them to select more than one option, the data still showed that people were twice as likely to have a bike lock (66 percent of those polled), than they were to register it at the Cop Shop (only 31 percent). Of those polled, an alarming 21 percent had had a bike stolen while attending New College.“I do not feel as if bikes are safe on this campus,” wrote first-year transfer Yasmeen Wilson, whose stolen bike had neither a

“I do not feel as if bikes are safe on this campus,” wrote first-year transfer Yasmeen Wilson, whose stolen bike had neither a lock, nor had been registered at the Cop Shop, in an email interview. “It’s pretty scary to realize that people are trespassing so deep into the residential side of campus and police have yet to do anything about it.”

According to Kessie, there was a serial bike theft on campus. Johnny Lee Anderson, known as “The Bike Man,” has a reported 13 police reports filed by the NCPD for stolen bikes alone. Anderson is currently in prison for carjacking.
“We were able to find out that he was taking bikes from us and pawning them in Sarasota county,” Kessie said. “We were able to charge him with a couple things, but the best way to charge people for this type of crime is, if one of the bikes is at the pawn, we can have the owner charge them with fraud, which is a felony.”
However, it is worth noting that the lack of students registering their bikes at the Cop Shop may also be indicative of a larger issue: the relationships students have with the NCPD.

“It’s fucked up,” second-year Daniel Niedospial, who also grew up in Sarasota, said in reference to the recent string of bike thefts on campus. Neidospial stated that his bike is not registered at the Cop Shop and, when asked why, replied: “I don’t like talking to cops. I feel like, as a liberal-arts college, we have a deeper knowledge of the history of the police force in America, in total.”

This becomes an issue, according to Kessie, when students opt not to press charges on bike thieves that are caught by the NCPD.
“Lately, we’ve had a lot of cases where […] we’ve asked the students if they want to prosecute [the bike thief], because it’s in their right to prosecute, and they’ll say no ‘I don’t want to get [them] into any trouble,’” Kessie said. “Someone said, in true New College style, ‘I don’t trust the criminal justice system.’ I had to chuckle a little bit about that because, it’s so New College, but the deal is this: if we catch somebody on campus who is stealing a bike, and the person doesn’t want to prosecute, this person could go and steal another person’s bike.”

Students were polled in the survey or whether or not they feel as if bikes are safe on campus. Of those polled, 45.45 percent believed that bikes were unsafe on campus, while another 42.42 percent were unsure.

As of right now, the NCPD recommends that students register their bike at the Cop Shop, where the serial number and a photo of the bike will be kept in their records, and to always lock it before leaving it somewhere.

“My bike was not registered at the Cop Shop,” Reid wrote. “But it should have been.”

Bikes can be rented and purchased from the New College’s student-run Bike Shoppe, located near the Dort and Goldstein Residential buildings, during their working hours. Bike locks can be rented out from the Cop Shop, located across from the Heiser Natural Sciences building, 24/7.