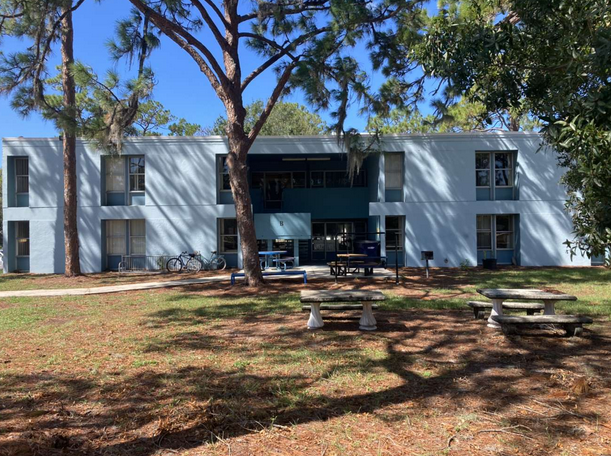 A photo of the recently-reopened B Dorm. Photo courtesy of Safari Swanson.

It is finally time to welcome the long-awaited reopening of B Dormitory, allowing students who were temporarily placed in Pei first court to move into their intended rooms. The original move-in date was set to be Oct. 3, but due to Hurricane Ian, the move-in date was pushed back to Oct. 11. This was not the final bump in the road for the recently re-homed B Dorm residents, however, as on Oct. 12 at approximately 1 a.m., students hanging out around the dorm were approached by an officer from the Campus Police Department (CPD) who believed them to be trespassing.

Further inquiry revealed that the Housing Department failed to inform the CPD about the reopening of B Dorm after the building’s opening was delayed, but miscommunication persisted even between Housing and students following the delay. Up to a week had passed since classes resumed on Oct. 4 and students had still heard no word as to when B Dorm was supposed to reopen. Even B Dorm residents themselves seemed to be in the dark, as various students—B Dorm residents and not—were posting questions in the student forum asking for any information to no avail.

“To the best of our knowledge, B Dorm was still closed,” Interim Chief of Police Jennifer Coley stated in response to the incident on Oct. 12 where students were believed to have been trespassing.

The officer involved had been securing buildings around campus, as is routine, when they noticed individuals in the B Dorm area. The officer made contact with the students, who then informed the officer that B Dorm was open for them to move into and had been since the previous day. One of the students involved forwarded the email sent by Housing to the officer. Interim Captain Kelley Masten followed up with the Housing Department who confirmed that the building was open to students.

“We have had people that go inside or attempt to go inside,” Coley said, referring to past trespassing attempts on campus.

“I think communication between the CPD and other departments on campus is decent—it has gotten better,” Coley stated. “This isn’t typical with Housing.”

Students were understandably frustrated with the lack of information they had received from Housing prior to moving into B Dorm. Students, after moving into B Dorm, are happy to have their own space, however some have reported the transition to be a bit underwhelming.