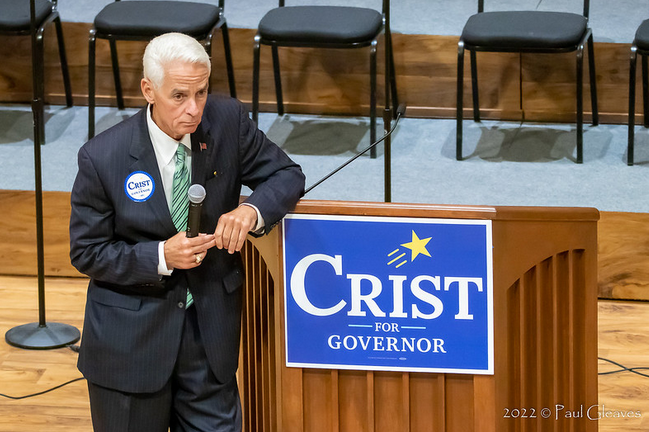 This isn't Crist's first bid for Florida Governor, but only time and the Florida voter will tell if this latest attempt will be a successful one. Photo courtesy of Flickr.

Current Florida Gov. Ron DeSantis (R) seems to be a headlining topic in a variety of news outlets, podcasts and twitter threads—he seems to reside rent-free in everyone’s head; but what about his opponent?

Democratic nominee for Florida Gov. Charlie Crist won the Florida Democratic Primary in August, and is facing off against DeSantis in this November’s Midterm election. Republicans seem confident that DeSantis will reign supreme at the ballot, but Democrats are maintaining optimism that they can win back Florida’s Government.

Crist isn’t new to the role of Governor. From 2007 to 2011 he served as Florida’s 44th Governor—but back then, he was running as a Republican, only switching to the Democratic Party in 2012. He has since lost the election for Governor three separate times as a Republican, Independent and Democrat. In the meantime, he has served on the Florida Senate and served on the Congressional House of Representatives for Florida.

Even though Crist has run as a Republican in the past, he still maintains that he is a strong supporter of issues many Democrats find important, having a particularly strong background in abortion rights.

In 1995, Crist broke away from the traditional Republican way and voted against a Florida bill that would have imposed a 24-hour waiting period for women seeking abortions, effectively killing the bill as the deciding vote.

Crist’s record of supporting abortion rights and the right to choose continued through 1998, when he was running for U.S. Senate.

While his support for abortion rights wavered during his time of leaving the Republican Party, his actions have been consistent, as he voted against 2017 legislation to ban abortions after 20 weeks and against efforts to defund Planned Parenthood.

“I’m pro-choice, because I think women should have the opportunity to make that decision for themselves,” Crist said in an interview with Fox News in August 2022. “After all, it’s their body, it’s their health.”

As a Congressional Representative, Crist has been supportive of decriminalizing marijuana, as well as “fully legalizing” the substance.

In 2019, Crist and Republican Representative from Alaska Don Young filed a congressional bill that would prevent federal employees and applicants from being fired or not hired over the use of marijuana. Crist claimed in a statement for U.S. News and World Report that this bill was “for our veterans.”

“Cannabis has been shown to address chronic pain and PTSD, often replacing addictive and harmful opioids,” Crist said “At the same time, the federal government is the largest employer of our veterans’ community. This conflict, between medical care and maintaining employment, needs to be resolved”

In 2020, Crist—as Florida Representative in the House—voted for a bill to decriminalize marijuana as well as tax it at a federal level.

Since announcing his bid for Florida Governor, Crist has made fully legalizing marijuana a keystone is his campaign.

“We will listen to our fellow Floridians—whether it’s fully legalizing marijuana, raising the minimum wage to $15 an hour, strengthening background checks, banning assault weapons— all of these things need to be done to have true justice in our state and in our country,” Christ said during his 2021 speech announcing his most recent candidacy.

His announcement speech could simply be political prose to gain the support of hesitant progressives, but with Biden’s recent order to dismiss federal charges of possession—there might be a little more pressure to tangibly change legislation in Florida.

As Governor in 2008, Crist proposed that Florida buy 187k acres from the United States Sugar Corporation for $1.75 billion, in order to reclaim the land for everglades restoration. Ultimately, the efforts were pushed back by a fairness commission to only 73k acres of both sugar and citrus land—setting back the original restoration project.

However, during the 2007/2008 financial crisis, Crist reverted his original opposition to offshore oil drilling in Florida.

“I hope I have a reputation of wanting to protect this environment, because I do,” Crist said to NPR. “But I also have to balance that, I think, as every citizen does, with, you know, what’s happening to Florida’s families? What’s happening to this economy? How dependent are we on foreign oil?”

Crist has had a rocky history with gun rights, and the National Rifle Association (NRA). Previously being an A grade by the NRA in 2011, he changed to an F in 2016.

In 2008, Crist signed the “Bring Your Gun to Work Bill”—as some called it—which allowed employees or customers to bring their firearms onto property, locked in their cars – with no way for employers or business owners to prohibit it.

“We need to have some restrictions, that’s pretty obvious to most people,” Crist told the Tampa Bay Times.

Crist’s most controversial history is most likely his policies on LGBTQ+ rights—notably, his vote to ban same-sex marriage while in the senate in 1995(or 98)(edit later).

As a Republican, Crist historically was against marriage equality for LGBTQ+ people. However, in 2010 when courts ruled that gay couples had the right to adopt, Crist showed his support and claimed that, “As we get older, I call it the convergence of life experience and wisdom. When you learn through the time of life more tolerance and become less judgmental, I think that’s a good place to be.”

In an interview with Watermark, an online LGBTQ+ news source, interviewer Tom Dyer questioned Crist on his previous support of banning same-sex marriage, and Crist’s previous comments that it wasn’t an issue that moved him. Crist’s response was an avalanche of apologies, with little explanation.

“The examples you cited were examples of me trying to be a good Republican,” Crist said. “I couldn’t do it anymore, and I’m sorry I did. I made a mistake. I’m not perfect. Please don’t hold me to that standard. And I’m sincerely sorry. I understand when it’s necessary to say I was wrong. That’s the journey I’m on, and I’m still on it.”

Dyer asked Crist how he would convince the Democratic Party that his views on LGBT rights were not simply “driven by political expediency?” and that he wouldn’t change his mind in the future if the opportunity should be beneficial.

Crist told Dyer, and voters, to “have a little faith.”

Crist has also showed support of Trans Rights, as he requested Gov. DeSantis veto a bill that would ban transgender athletes from participating in women’s and girl’s sports.

“This cruel legislation is creating an issue where one doesn’t exist, picking on young people for political gain,” Crist said in a statement. “Governor DeSantis should veto it immediately. I challenge Republican legislators in Tallahassee to imagine being a kid who is in this situation, what it says to them to be singled out by lawmakers in such a mean-spirited way.”

During his campaign, Crist’s top donations have been from Breakthru Beverage Group—a wholesale alcoholic beverage company, and Alakai Defense Systems—a military tech company which makes detection sensors for defense and security applications. Individual top donors have been from people in real estate, retired folks and lawyers.

During the recent debate he had with DeSantis, Crist asked of the Governor, “Why don’t you look in the eyes of the people of the state of Florida and say to them if you’re re-elected, you will serve a full four-year term as Governor,” alluding to DeSantis’ whispered presidential aspirations.

DeSantis’ response was a deafening silence for several seconds, before saying the only person he is looking to defeat is Crist—but never fully responding to the question.