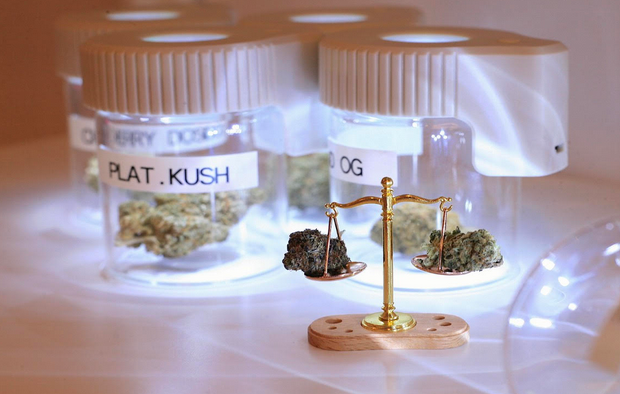 Containers of cannabis sit, some being balanced on the Scales of Justice symbolizing the interaction between the two. Photo provided by Adobe Stock Images.

In recent years, marijuana politics are making large leaps in becoming more modernized, shifting society towards a more relaxed and accepting view of the subject. On Oct. 6, President Joe Biden issued an executive order which pardons all prior federal offenses of simple marijuana possession. While civilian worries rise due to the ambiguous nature of the statement, what it really comes down to is the individual states themselves. Here’s what you need to know.

When this announcement was first released, there were many mixed emotions. Some celebrated the presumed step towards wider acceptance and decriminalization of marijuana, and others began to worry. The truth is, not many people understand that Biden specifically pardoned federal offenders convicted of “simple marijuana possession” only. What does this mean?

Simple marijuana possession is defined as “the offense of possessing up to and including twenty grams of marijuana,” which can either be a misdemeanor, first, second or third-degree felony. Offenders can also spend up to one year in jail and fines can be up to $1,000. Biden’s weed pardon offers those convicted of simple possession at a federal level only—not state or local—to have the conviction removed from their record.

The biggest concern that has risen due to a common misunderstanding of the pardon is that prisoners with these charges are being released, but this is not the case. Having a simple possession charge for marijuana cleared from a criminal record doesn’t mean that prisons will begin to open their doors; but it is a step towards the decriminalization of marijuana. The goal of this pardon is to increase the likelihood of people with these charges getting jobs—as a federal level offense can be a significant obstacle.

Studies have shown that, “African Americans are arrested for violating marijuana possession laws at nearly four times the rates of whites, yet both ethnicities consume marijuana at roughly the same rates.” Allowing those with federal possession charges to have more opportunities and be less alienated within society is also seen as a step towards removing discrimination within marijuana offenses in the country overall.

There are many speculations as to why the pardon was released at the time it was, but there are two main theories.

The first theory revolves around recent events surrounding Texan basketball star Brittney Griner—two-time Olympic gold medalist and part of the Women’s National Basketball team—who was sentenced to nine years after being found guilty in a Russian drug case. She was arrested at Moscow’s Sheremetyevo airport on Feb. 17 after Russian authorities found multiple cannabis-infused vape cartridges within her luggage.

Many Americans were enraged when they heard the news, as it came out in the midst of the heightened tensions between Russia and Washington as the Ukraine crisis was beginning to unfold. Many feel that Biden’s pardon was influenced by the pressure to show support and action for the situation.

The second theory revolves around current American politics and the stress of both political parties expecting change with the wider acceptance and decriminalization of cannabis, and this favorable decision towards the currently criminalized drug is predicted to sway voters in Biden’s favor.

The Catalyst spoke with Founder and Chief Product Officer (CPO) of cannabis retail company Pinnacle Emporium Erik Watkins, who spoke more on the business, his thoughts on Biden’s recent announcements and cannabis in a medicinal setting.

“There’s not one state that is just one way for a reason,” Watkins said, speaking on his experiences traveling to many states and encountering various different positions on marijuana legalization. “Half the state will be a completely other way, but they get labeled a certain type or demographic through the mainstream media who, for whatever reason, gets involved one way or another. It’s an interesting landscape no matter where you go.”

“How they view things, it’s amazing, how their perception is shaped by life interactions and experiences,” Watkins continued.

Looking into the future of cannabis within the United States on the federal level concerning the legalization, Watkins said that he felt that Biden’s pardon is “heading in the right direction.”

“I don’t think it’s going to be federally legal for a while, and again, that’s [from] traveling and working in seven states and seeing people who are invested in it monetarily on both sides,” Watkins said.

When further discussing federal action on marijuana legalization, Watkins brought up an important point: “Unless it’s federally changed, each state gets their own thing. Obama said it, Trump said it and now Biden’s saying it. It’s a state issue.”

As of Feb. 3, 37 states, three territories and the District of Columbia allow the medical use of cannabis products. In 19 U.S. states, marijuana is available recreationally as well. Watkins spoke on his own experience with medical marijuana and how it was his inspiration for getting into the business.

“I’m blind in my right eye, I had an accident almost 25 years ago,” Watkins explained. “I was shot in the eye playing paintball, and long story short I ended up with glaucoma, had a cataract [and] my retina became detached all kinds of issues.”

Watkins realized that smoking cannabis helped him deal with the pain that surrounds such an intense, life-changing injury.

“One day, I realized smoking cannabis really helped my eye and ocular pressure, because after a lot of trauma in the eye there are a lot of issues, and when I smoked as much cannabis as I could it was actually helping my eye,” he said. “I began to do research, this was in ’98 or ’99, I realized what it could do. And I started pushing full force like, holy crap, there’s actually something here.”
“A lot of people don’t realize that Tetrahydrocannabinol (THC) itself is an anti-inflammatory, an analgesic [pain reliever], and it’s a natural expectorant [expels mucus],” Watkins concluded. “Those are just three basic things, and it goes from there. The medicinal benefits are still just being discovered, and that’s why I want to see it legalized”

Closer to home in the New College community, second-year Carlos Robbins spoke about his experiences with having a medical marijuana card and how it has benefited him.

“I got my medical marijuana license after I turned 18 as a gift from my dad,” Robbins said. “My main use of weed is for joint issues, and there are serious days where my body aches so hard, and weed is the only medication that has been able to help me.”

“My doctor has prescribed me arthritis and joint medication,” Robbins continued, speaking about alternative medications he had tried beforehand. “I tried the arthritis Tylenol, and any kind of joint or muscle medication hasn’t helped me until I started using weed. It has really helped me relieve my pain and keep my body from feeling like it is caving in on itself just from walking.”

In addition to this, Robbins touched on the differences between medical marijuana and street marijuana.

“Medical marijuana is as clean as it can be, as medically sound as it can be, as potent as it can be and you can even spend more money to buy more potent stuff,” Robbins said. “It truly is a great system, so that you know if you have a high tolerance, you can purchase a higher percentage THC.”

“It’s just nice to not have my body ache all the time,” Robbins said.

When looking at the bigger picture, Biden’s weed pardon may be seen as a token gesture. It is a small step, still a step nonetheless, in the direction towards the decriminalization and acceptance of marijuana as a whole. Marijuana is no longer viewed as just a drug, but is now seen as one of the newest medical advancements that may just be a saving grace for many.