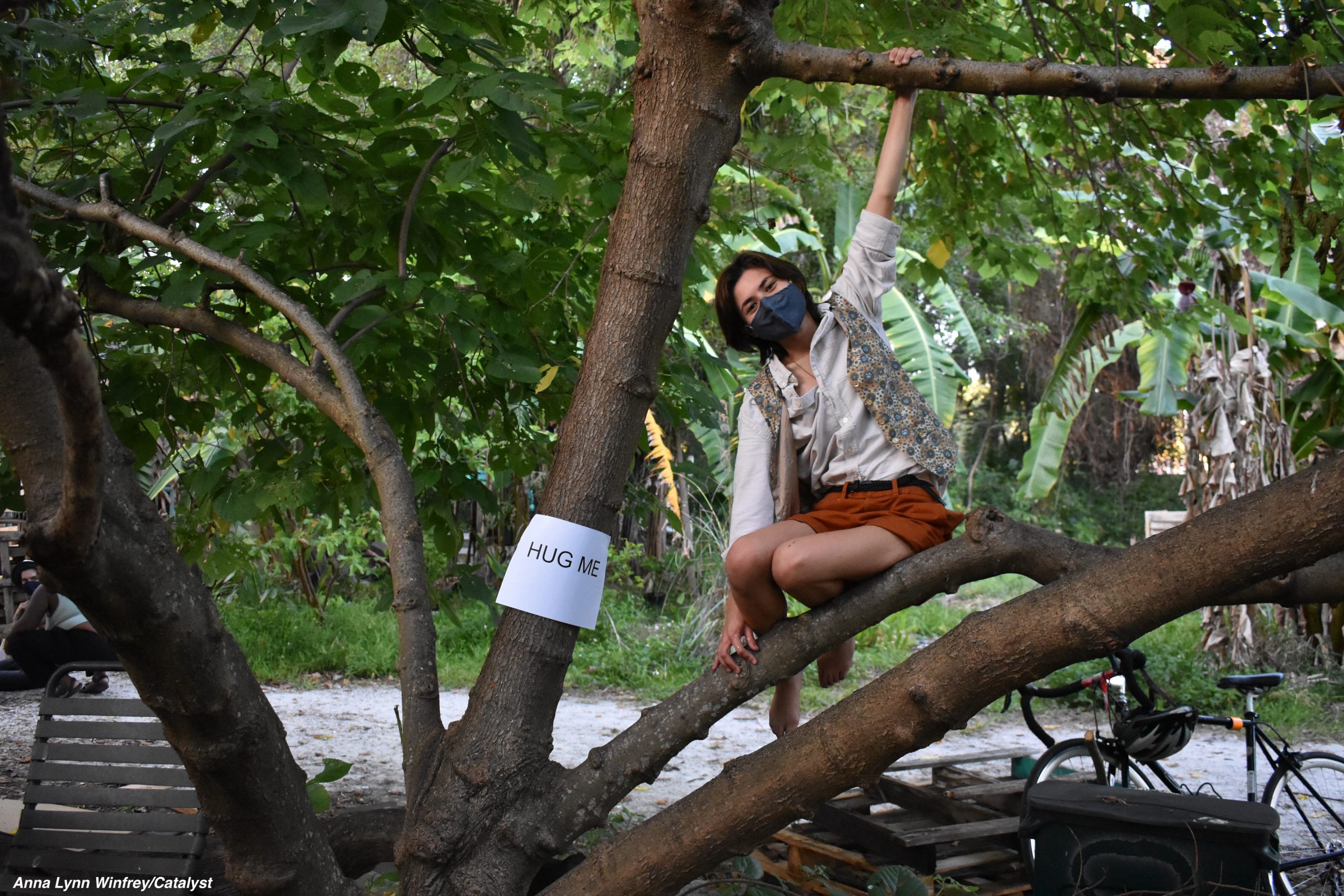 First-year Sidney Craig embraces a tree in the Caples Garden on April 30, 2021.

Arbor Day, now a worldwide event of tree planting and nature-enjoying, dates back to 1872. The first Food Forest Festival at New College was held in spring 2017 and an annual event has taken place every year since then, with the exception of last year due to the pandemic. The Council of Green Affairs (CGA) organized this event.

“We normally have the food forest festival on Arbor Day,” co-Vice President of Green Affairs Evan Morgan said. “But because we weren’t able to get approved for planting trees and stuff in time, we made it into a Caples festival: the organic gardens, NatiMediFly garden, the food forest and the apiary.”

At the beginning of the event, students led tours of the different areas. Morgan, the Caples Garden TA, led a tour of the plants in the gardens. Third-year Liah Continentino led the NatiMediFly tour and the food forest TA, Gus Frank, led a tour in that area.

“I learned today that the beautyberry bush is really good for bug spray,” Nicole Silvera, a third-year transfer student, reflected. “So now I know that if I’m ever getting bit, I can just come here and take a leaf.”

Morgan grilled a variety of hot dogs and hamburgers, but only vegan meat was served.

“We used all vegan meat substitutes instead of real meat to better align with the CGA’s sustainability mission, serve the large amount of vegan and vegetarian students that attend our events and cut down on food preparation concerns, especially with regard to storage,” co-Vice President of Green Affairs Ky Miller explained.

In addition to lawn games borrowed from the SA[u]CE office and the impromptu volleyball game that started up in some open space across the street, attendees painted bee boxes that will house bees in the campus apiary. Miller, who is also the Catalyst’s online editor, facilitated that portion of the event.

“We constructed 15 bee boxes using materials that were loaned to us by Alma Johnson from the Sarasota Honey Company,” Miller said. “Those boxes are going to go into the campus apiary to replace the old hives and create new, comfy little homes for our campus honey bees.”

Second-year Vianey Jaramillo came out to the event to relax and enjoy a much-needed break from studying. She painted a verdant pattern of flowers and leaves on the sides of a bee box.

“When I do work, it’s kind of like a tunnel vision: I feel like I don’t have time for anything,” Jaramillo said. “But while I was painting, I wasn’t really thinking about my work. I was very present.”

“I think events like this in the garden are important because it gets students out in nature,” third-year transfer student Nicole Silvera said. “Especially after this year, being indoors so much, it’s important for us to reestablish a connection with nature if we don’t have one because it’s just so beneficial for us and for the plants.”

Silvera added that more outdoor in-person events recently have been wonderful to attend.

“It’s been nice to actually see events like this happen where there’s people here because I feel like for at least the beginning of the semester, it was so hard to see campus kind of barren,” Silvera said. “Now, it almost feels like this is what New College is.”