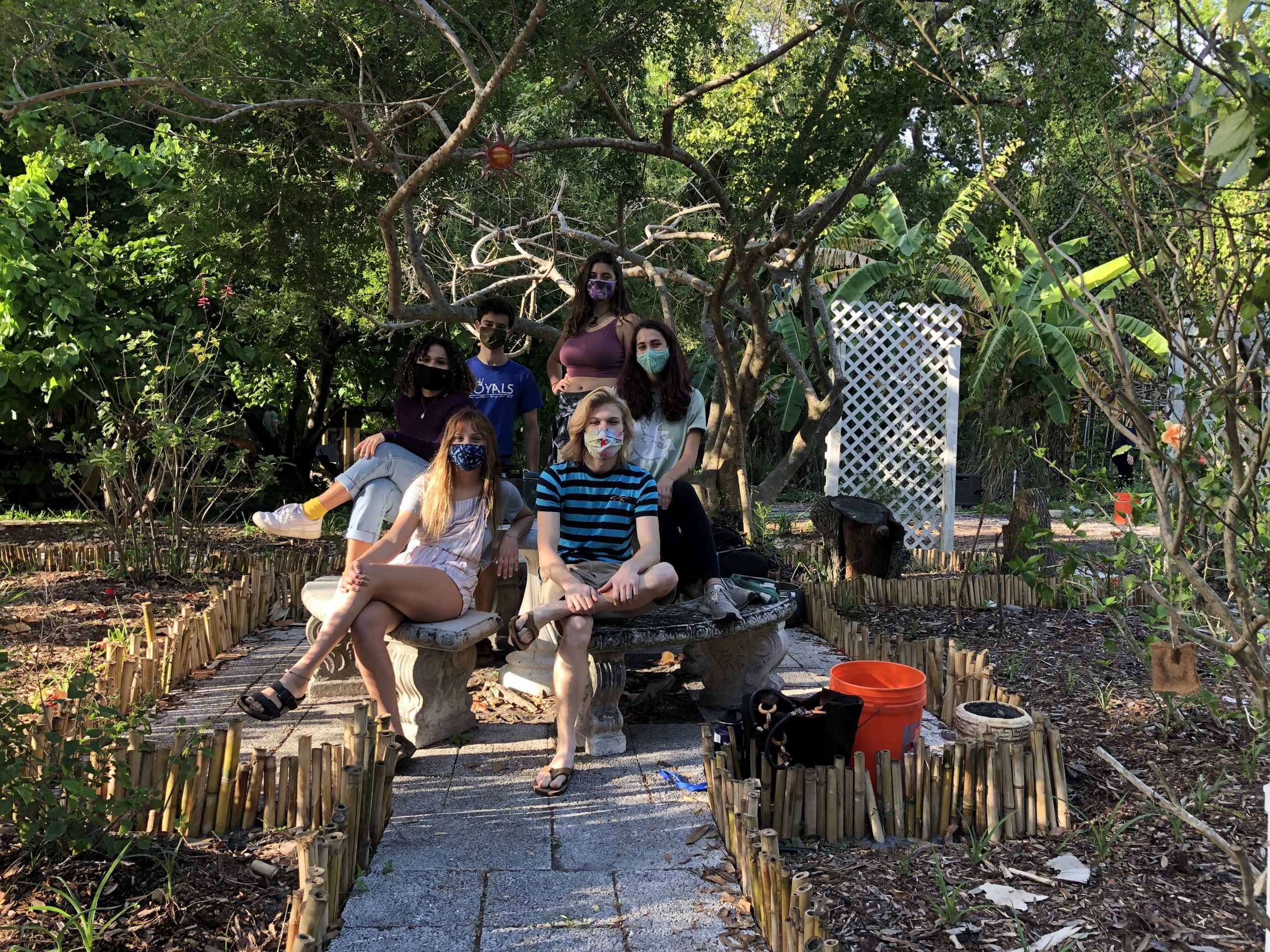 At the end of ISP, New College’s native, medicinal and butterfly-attracting garden—called the NatiMediFly for short—emerged from its metaphorical chrysalis after five intrepid students renovated what was once an overgrown, brambly maze and restored it to a lush, sweet-scented and pollinator-friendly community space.

Second-years London Weier, Nick Beck and Gus Frank, along with third year Liah Continentino and thesis student Alex Mars, spent all of ISP working up to 10 hour days clearing out brush, fallen branches and swathes of sandy soil from the space that began as the Caples Organic Garden’s very first plot in the early 1990s. What had in years past been a much-loved hang-out space had turned into “kind of an eyesore” after years of neglect.

Almost exactly one year ago in the spring of 2020, Weier and Continentino both had big plans for their gardening final projects. Weier sought to clear out the neglected NatiMediFly back then, and Continentino wanted to create a medicinal tea garden. But when COVID-19 sent students home—sometimes to opposite corners of the country—those projects became impossible to carry out.

“COVID happened, and restoring the NatiMediFly obviously didn’t happen, so when I came back to New College it was a personal interest of mine,” Weier reflected. “I think all of us just really craved to make this place beautiful and to make it a place that people wanted to spend time in.”

The group considered trying to restore the NatiMediFly on their own time between busy class schedules during the fall semester. However, Continentino recalled that the more they talked about it, the larger the project became, until it seemed like a labor of love that would require all of their time and focus to bring to fruition.

As ISP rolled around, the five students decided to dedicate themselves to an independent study of destruction: ripping out old roots, removing invasive plants and tearing down thorny vines that threatened to choke the few native, medicinal, and butterfly-attracting plants that persevered through years of unchecked growth. Assistant Professor of Botany and Environmental Studies, Dr. Brad Oberle, sponsored the ISP.

“We probably ripped out about 70% of the biomass in this place,” Weier said. “And that was kind of a painful process in some ways, not only physically, but also just because we were watching ourselves destroy this place that we were trying to love on.”

“I wouldn’t say we destroyed it,” Beck added. “I’d say we gave it a quite the haircut, and in some cases a buzz cut was necessary.”

“Simply, this place was a mess,” Beck continued. “Yeah, it was a beautiful, luscious, flourishing mess—and we loved how wild this place got—but you couldn’t walk through it, no new plants would receive any light and it wasn’t very inviting, unless you’re a palm tree.”

However, destruction begets regeneration.The students shaved off about a half a foot of old soil to level the walkway with the planting beds. After building an even surface, the group  added sheet mulch made from cardboard, a highly porous charcoal that helps soils retain nutrients and water called bio char, compost and manure to create a deliciously nutrient-rich medium for the new plants. Mars also came up with the idea of creating a swale, or shallow trench, between the new garden beds and the walkway to improve water retention. After that, the students planted pollinator-attracting plants such as coral honeysuckle and milkweed, native foliage such as passionvine and countless other medicinal flora.

“To bring in a nice residency of butterflies of all sorts was a huge goal of ours,” Beck smiled. “I’m hoping as these plants grow and blossom, we’ll start seeing some more butterfly tourism around here.”

The plants were purchased with funds from New College’s sustainability-based project fund, the green fee.

“I think maybe the biggest thing that we considered was long-term maintenance because it was very clear that this space might not always get the maintenance that it needs,” Weier explained. “So, a lot of our decisions were rooted in considering what’s going to happen if this isn’t taken care of for five years, and how we can build this place so that if it gets a lack of care for an extended period of time after we’re gone, it’ll still be okay and students or maintenance won’t have to do what we did again.”

Weier, Beck, Continentino and Frank have also been hard at work creating a Canvas page replete with photographs and educational content about each of the species in the NatiMediFly. Weier also created a hand-drawn map that will serve as a navigation and identification mechanism embedded in the page, so students will be able to select a number corresponding to a plant’s approximate location on the map that links to a module with information about the species of interest. The group is planning to install a QR code in the garden that students can scan to view the Canvas page, and the students are also working to create a permanent repository of information about the NatiMediFly in the form of an open-access website.

The group will also be putting out a call for student art pieces, such as sculptures and metalwork to install in the garden, and encourages students to come meditate, do homework and spend time with friends surrounded by butterflies and greenery.

“We want everyone from anywhere to come enjoy the space, and remember that we can still be outside and enjoy nature when we can’t be super close to a bunch of people,” Mars added, smiling.

The NatiMediFly’s role as one of the New College campus’s main pollinator-attracting gardens will also be pivotal in supporting the college’s local bee population, which is housed in the Caples bee apiary near the garden. New College’s Council of Green Affairs (CGA) is collaborating with the campus Landscape and Signage Subcommittee to achieve Bee Campus USA Certification, which would brand the college as a pollinator-friendly institution, increase pollinator gardens on campus and encourage pollinator ecology-based education opportunities for students.

Continentino hopes to serve as the CGA’s Community Garden Coordinator to co-teach a pollinator ecology tutorial with Pollinator Ecology Coordinator Tony Opio in the fall of 2021, as well as to support the long-term maintenance of the NatiMediFly and native plant and pollinator gardens that will be constructed around the Four Winds Cafe. Frank currently works as the CGA’s Food Forest and Carbon Farm Coordinator where he oversees the maintenance of the campus food forest and Weier was recently elected as the campus Landscape Representative where she will represent student interests on the Landscape and Signage Subcommittee.

“I think we left our mark and this little piece of land in the best way that we could with the resources we had, and we’re full time students,” Beck reflected, as Weier, Continentino, Frank and Mars grinned in agreement.  “ISP and just going to a school where you can have a month dedicated to a project like this really made this all possible. We love this land, we love the garden, and we tried to put every drop of that love in here. Two years, five years, 10 years from now, I’m excited to see what it looks like and I’m excited to see what stays.”