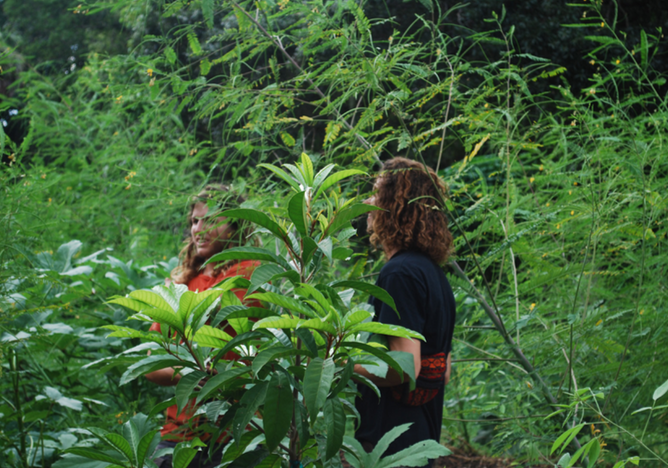 What was a patch of land just south of the Old Caples gardens is now a sustainable collection of nutritious and edible plants that will prove to be a monumental resource for generations of New College students to come.

“Our friend Haroun, who is just like a local plant dude, came down here and was like ‘see this area here, we could turn that into a food forest in like a month.’ And we were like ‘what? I guess he’s right…’ And this all happened from there,” Morton offered as inspiration for the forest.

The idea for a food forest surfaced at a lucky time, coinciding with the green fee’s accumulation of $70,000. The green fee – which students pay semesterly for sustainable campus projects – has contributed over $20,000 to raise the food forest, proving that money actually does grow on trees.

Over 30 trees, plants and bushes are currently growing in the food forest, including jackfruit, avocado, a fig, peanut butter tree, several citrus trees and lots of fruit trees.

The food forest’s Pigeon Pea is coming into season and big bunches of beans are growing ripe on the trees. Four Winds will receive a hefty number of these protein-packed beans when spring term rolls around.

Pigeon Pea, Mexican Sunflower and Moringa, a vitamin rich and versatile crop, are three “filler” trees planted to offer food and nourishment from the food forest in it’s infancy, “while we’re waiting for the fruit trees to realize their full potential,” McWilliams said.

Okra took off in the food forest after a student from the previous semester’s gardening tutorial sprinkled seeds all about. They grew so well that Four Winds received fresh okra for several weekly specials.

The food forest is home to an Acerola Cherry, or Barbados Cherry, which packs more Vitamin C than your average orange and fruits almost all year round.

An Everyberry Mulberry tree got off on a bad foot, shedding all of its leaves before defying death and springing back mid-semester.

“So, it’s a hopeful little tree and once it fruits it will have fruit most of the year,” McWilliams said.

McWilliams identified the Mustang Market as the place where the oddest of the food forest’s plants were adopted.

“I’d recommend any interested party to check it out,” he said. “There’s a lot of Thai culture and people from Central America, there’s a variety of Thai fruits and vegetables and fruits you didn’t know exist.”

A Food Forest ISP will be offered this January, led by none other than Morton and McWilliams. Tending to the food forest will be the foundation of the project.

One short-term goal McWilliams has for the forest is to establish a more edible or useful ground cover to combat grass and make the best of the space. One in consideration is perennial peanut.

“We’ll be working down here a lot, teaching younger students how to take it over when we graduate,” McWilliams said. “We’re encouraging different projects and study opportunities.”