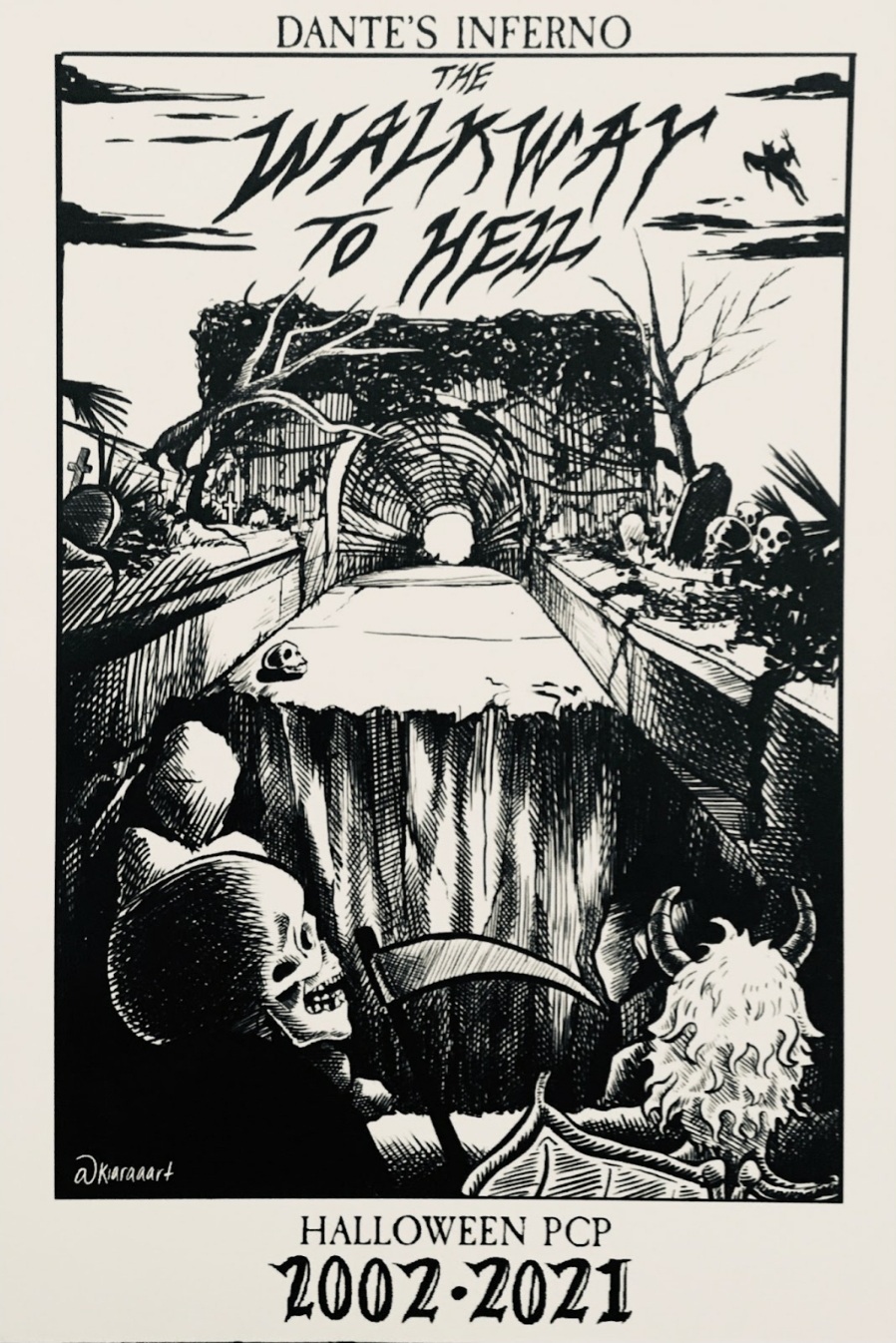 “New College students are no stranger to hell here: the Pei tunnels, Ham food, the Devil’s chair by the bay. We’re ready to help the campus embrace it once more.”

This is the winking statement offered by the hosts of this year’s Halloween Center of the Universe Party (COUP), third-year Madi Markham and thesis student Bella Shuler. The theme pays homage to the infamous 2002 Dante’s Inferno Halloween COUP, and a buzz is in the campus air: nostalgia for the New College party experience pre-COVID-19, a campus-wide love of school lore and a yearning to raise hell—no pun intended—in the hedonistic and Dionysian way that New College students are unmatched in.

The theme of Dante’s Inferno was chosen for this Halloween COUP by a vote among the student body, and has been met with a raucous excitement. Markham and Shuler recall that students were calling for a return of the theme well before they came up with the idea themselves. Markham explained that in their first year at New, a New College Student Alliance (NCSA) Archives “artifact” email circulated the student email list with a poster from the original 2002 COUP.

“This was back in fall of 2019, and upperclassmen were responding and saying, ‘This is so cool, someone bring this back!’” Markham reflected.

Although the theme wasn’t ultimately proposed that year, the idea stuck in the minds of then-first-years Markham and Shuler.

While talking over the summer, the two friends decided to try their luck at hosting this year’s Halloween COUP, and when brainstorming ideas, recalled the popularity of the Dante’s Inferno concept.

“One of us was like, wait, do you remember that email that was bumped our first year about that COUP theme?” Shuler explained. “We found the email and thought, ‘We have to do this. ’”

The original 2002 party was well-remembered by the alumni that they reached out to. Alums recalled merrymaking and revelment that went on until 5 a.m., leaving the campus completely desecrated.

“Obviously that is something we’re not going to do, but they completely trashed the place,” Shuler joked. “They went crazy. I think that’s a little bit about why some of the alumni have been so excited as well.”

“The overall vibe we’re getting from alumni is that they are just really happy,” Shuler continued. “I think that people like seeing us bringing back old traditions, because New College kids love [the] lore!”

Moving forward in time 19 years, this Halloween’s COUP will feature plenty of new elements to differentiate it from its predecessor. Areas around campus will be adorned to represent the classic levels of Hell, allowing students to travel and traverse between “Lust” in Z-Amphitheater, all the way to “Greed” in Palm Court. Markham excitedly explained that “L’Inferno,” a silent Italian film, will be projected off the walls of the Nook—”Gluttony”—while single-serve food and drinks will be offered to satiate the party-goers.

Live performances from local bands, a favorite among students, have been selected and approved to serenade students in spots across campus as well. Keeping in the spirit of a COVID-conscious event, The Band Room will be the only indoor location. There, students will slow down in a quieter setting and be able to get tarot and psychic readings from other students who have volunteered to give them throughout the night. Markham hinted that there will be a few surprise art pieces and installations that will be featured the night of the party that are still under wraps, but to keep an eye out for them in Palm Court and Z-Amphitheater.

“There are a few surprise art things coming in that we aren’t sharing yet,” Markham teased. “I think we’re going to have some cool stuff that people will be really excited about.”

The two also spoke to security precautions being taken to ensure that the event is safe for all. For the first time since the coronavirus pandemic began, the traditional COUP system of wristbands for students and their visitors will be reinstated.

Shuler asserts that “this year, we are not hiring outside security, nor the sheriff’s office,” marking a break from the school’s tradition of hiring outside security forces, which has historically been met with contention from students and insistence by school administration for the night of COUPs. Keeping in tradition, campus police will be patrolling the perimeter of the COUP locations and of the campus, primarily to prevent off-campus community members from entering. In the past, there have been concerns over non-students being attracted by the music and lights, and in response to recent anxiety over dorm break-ins, this measure will continue to be taken. Markham and Shuler assure that “this is very typical behavior for walls and COUPs.”

Markham is happy to be able to promise students that Hamilton “Ham” Center would be open the entire night.

“This was agreed upon with the caveat that at 3 a.m., the cops will be doing a sweep to ensure that there are no suspicious people in Ham, so people need to be conscious of that,” Markham highlighted.

They also implored students—especially first and second years unfamiliar with pre-COVID COUP protocols—to be diligent about obtaining wristbands for themselves and guests.

“Please be really aware that the wristband policy is strict,” Markham stressed. “Try to be on top of that.”

The pair urged students to remain masked as much as possible throughout the night, especially within indoor spaces. Markham also encouraged students to get tested before the event, and noted that volunteers with harm reduction materials, or “Fairies,” will be floating around at COUP to provide assistance and will be carrying extra masks for anyone who lost theirs in the chaos of the party.

“We’re trying to avoid any kind of outbreak,” Shuler said.

Since the theme was announced on Oct. 7, students have been clamoring to share costume ideas and snag up themed merchandise for the event. The sardonic posters around campus heralding, “You’re going to hell—See you there!” are eyed up by magpie-esque students waiting for the moment COUP starts and they can pluck a poster off the wall to take home.

Describing the experience of working with Robert Schober (’04), the original artist of the 2002 COUP artwork, Markham and Shuler were enthusiastic.

“We emailed Robert Schober and he was really down, he said, ‘You can use it however you want’, because we were wondering if we could update it and color it, and he thought it was really cool,” Markham remarked.

They also highlighted that a new artist was chosen to design complimentary art for this year’s party. After an open call to the forum, they discovered first-year Kiara Vasquez-Valentin, who they felt was a perfect fit.

“We had people send in their art styles, and Kiara’s was exactly what we were looking for,” Markham said. “We told her, can you do something close to Robert’s style, pick a space on campus and make it hell themed? They just ran with it, and it came out so good!”

The hosts are hoping to do a custom screen-printed t-shirt run, but because of funding issues, this couldn’t be achieved before COUP. They hope to be able to raise the money to do so post-event due to the high demand of requests that they continue to receive from both alumni and current students. However, Markham and Shuler have been able to print postcards with both the 2002 and 2021 artwork, selling them on Oct. 21 and 22 to students to raise money for decorations.

Markham and Shuler were thankful for the support of the campus and volunteers thus far in what is a student-run event. Even so, Shuler did ask that students continue to look out for emails about ways to become as involved as possible.

On the pressures of being the hosts of such a large event, infused with such large expectations, the pair were hesitantly hopeful.

“I guess one thing I will say about the whole experience is that it feels like there is a lot of pressure and it’s really stressful, but I know it’s going to be super rewarding,” Markham said. “And we are just super excited, I think with the theme and the timing—coming out of the last year and a half—obviously we are still in the pandemic, but things are a lot different. I think it will be really good.”

The fervor with which the student body has embraced the theme of Dante’s Inferno suggests that there is something fundamentally New Collegian in the cryptic narrative. With students keen to dance and frolic together after almost two years of separation, it seems that they’ll take to anywhere with glee, even the fiery pits of Hell.