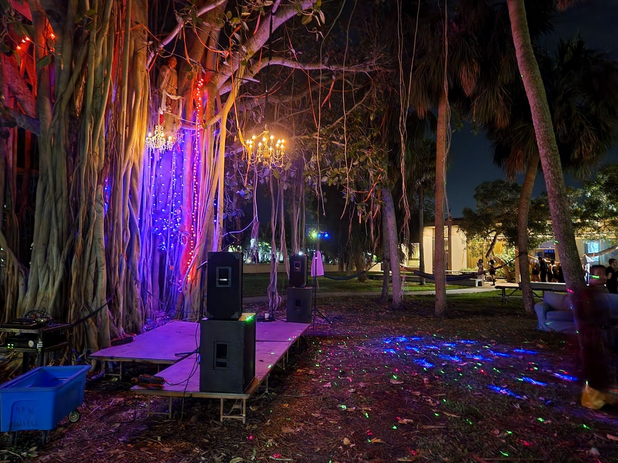 Crowded venues, awesome decorations and lack of water? What more would you expect from New College’s first Center of the Universe Party (COUP) of the academic year? This semester’s Vampire COUP and the campus-wide Halloween party for the 2022-2023 COUP season was hosted by thesis students and recurring COUP host Nick Beck, Gus Frank, Rocío Ramírez Castro and London Weier who worked hard to create a great experience for students.

Vampire COUP was separated into four distinct sections around campus, complete with music and dancing: The Coffin, The Web, The Gothic Ball and The Cellar. Hamilton Classroom (HCL) 7 also served as a Chill-Out Zone, with water, snacks, dim lighting and comfortable places to sit and take refuge from the monster mash happening outside.

The Coffin was located in the Z Amphitheater where live artists could perform while students either sat in the audience or danced in the crowd. This location was complete with a black spiderweb stretching across the windows of Z Dorm, streamers, balloons and the much beloved bubble fog machine.

The Web was located in Palm Court with a fake spider web that wrapped around some of Palm Court’s famous palm trees, creating a closed area where students could enjoy the music and dance. The secluded location provided a tight and almost secretive atmosphere.

HCL 7 or the Chill-Out Room is a signature venue at every COUP in order to maintain the absence of police on campus. This location provided water, snacks and places for students to sit when they were feeling overwhelmed. The individuals managing HCL 7 also provided relaxing videos that were shown on the projector as well as gentle, soft music. Dryads and Fairies—student volunteers with bystander intervention training—frequently entered and left the room in order to change shifts or refill the food and water. The room’s relaxing atmosphere was perfect for students who wanted a break from the music.

The Gothic Ball was located in the Nook surrounding the Banyan tree. This location was decorated with various colored lights, a stage, chandeliers and two couches for students to sit and spectate on. Most students used this location to take pictures in the gentle glow of the Banyan tree lights. The Gothic Ball seemed to be a popular place among students to hang out and listen to music.

The Cellar was located in the Old Mail Room (OMR) in Hamilton “Ham” Center. This particular location included decorations along the walls and ceiling of the room as well as a blacklight, writing along the walls and fake skeletons. The dimmed lights and dark atmosphere was by far the spookiest location on campus.

Obviously, Vampire COUP couldn’t have happened if it wasn’t for this semester’s hosts and their fundraising efforts. Events such as the 2022 Garage Sale allowed the hosts to raise money in support of COUP. They also put together a GoFundMe page and even included their own funds into the effort to pay a former New College student, Kiara Vasquez-Valentin, to design the Vampire COUP poster.

The hosts were also happy to share their own experiences with hosting an event such as COUP.

“I was very happy with it—I saw a lot of people having a good time,” Weier said.

“One of my favorite things of the night was how many people were in full-out costumes—they were so committed,” Weier mentioned.

On Oct. 31, Beck created and shared a Google Survey that allowed students to share their thoughts, experiences and pictures from Vampire COUP. After briefly looking over some of the responses, Beck was pleased to report that most individuals had a positive experience.

“Shoutout to whoever had a ‘neutral’ time,” Beck said, referring to one student’s anonymous response.

All jokes aside, Beck also mentioned the valuable feedback he heard from students: these included issues regarding the lack of water and the air conditioning (AC) being turned off in HCL 7 and the OMR.

These hosts also shared valuable insight and information regarding what it was like to host a COUP. They recommend that students interested in hosting a COUP should reach out to maintenance regarding the automatic shutoff of AC in any of the indoor venues and advise COUP hosts to order decorations weeks in advance.

“To be a COUP host is to bring joy to the campus while sacrificing a lot of your own joy and personal time,” Weier said, emphasizing the responsibility of the position.

Despite the hosts’ intense and sometimes difficult experiences, they also highlighted the fact that the experience is gratifying and rewarding, and hope to help make COUP an easier experience for hosts in the future.

Not only did the hosts put in their personal time and effort to make COUP happen, but so did their friends. Members of New College’s women in STEM-centric club, STEMFem, also helped to organize the clean up event that morning after COUP, allowing the hosts to take a bit of a break from running everything.

Overall, Vampire COUP was a success. However, be sure to thank the hosts, their friends and everyone else who was involved in making the 2022 Halloween COUP an amazing experience. Between the dark decor and spooky atmosphere, it was a great night for students of New College and their guests.