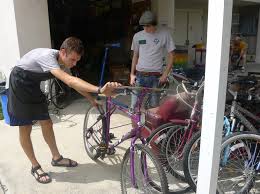 Former Bike Shoppe Teaching Assistants (TAs), third-year Gabriel “Gabe” Motsinger and thesis student James Keat were both let go during the final week of February by New College Student Alliance (NCSA) Chief of Staff, third-year Rolando Tate, after a motion for their termination was cast by the NCSA. A series of complaints were made against the Bike Shoppe last semester while Motsinger was the only current TA and Keat was volunteering, during which most of the complaints were made. The NCSA called for their dismissal without the knowledge that Keat was not on payroll at the time. The construction of a TA Overhaul by Tate is now underway with the goal of increasing communication between TAs and the NCSA to ideally prevent a similar situation from happening again.

First-year Jude Zelznak, the Shoppe’s current and only TA since late February, first caught wind of issues with the Bike Shoppe last semester through various forum posts, asking when it was supposed to open. Their brother, Cole Zelznak (‘18) had been a Bike Shoppe TA for all four years he was enrolled, so when one thread stated that students should email Motsinger if they wanted to be a TA, Zelznak decided to give it a shot. Once the two were in contact, Zelznak was able to tour the Shoppe and meet with Student Government Business Manager and Coordinator Dawn Shongood to discuss the terms of their employment.

At this point, the Bike Shoppe had no working cash register, no system in place to make orders and no regular hours. Zelznak was hired around mid-February after a week of volunteering under the pretense that they would be solving some of the Shoppe’s organizational issues. Keat was also placed on payroll a few days afterwards. Despite his previous semester of unpaid volunteer work, Zelznak states that he was “essentially a TA.” Zelznak describes their time as a TA as a learning experience where the three would work in tandem in their areas of expertise—Motsinger and Keat as mechanics and Zelznak as a more managerial position.

The NCSA is generally concerned by this internal hiring process, as hiring through recommendations and personal emails instead of formal applications allows for potential problems in the future. Tate continued to receive complaints about the Bike Shoppe from “a small amount of people,” including NCSA members and primarily having to do with a lack of assistance.

“The Bike Shoppe is kind of an open house,” Tate said. “It’s an open shop with attendant people who can help if need be. But I learned that people weren’t being assisted at all.”

Tate fired Motsinger and Keat through an email announcing their termination during one of their shifts and visited the Bike Shoppe soon after to reconfirm this in person. Their termination was decided executively after several NCSA members issued a “call to arms.”

“This needed to happen both for the sake of saving face after having [The Bike Shoppe] be a negligible resource for so long, and for the sake of cutting losses and getting on to fixing the problem as soon as possible,” Tate said. “Which they felt would be better done with new employees rather than retraining the older employees.”

Tate assures that he did not know that Keat only recently was put on payroll and had not received his first paycheck until after he was fired. Even so, voices within the NCSA believed that this did not discredit his prior inactivity. Lack of a formal complaint system during this time played heavily into what he describes as a “moral dilemma.”

“I couldn’t at that point, and still kind of can’t, verify all of the complaints against him,” Tate said. “I feel like at this point it’s not fully delineated and not formal enough.”

From Zelznak’s perspective, Motsinger and Keat’s dismissal came just as soon as the Bike Shoppe was beginning to gain more internal structure, and they scheduled a meeting with NCSA President Steven Keshishian and Vice President of Student Life Joseph “Joey” Daniels in order to address the miscommunication between both parties.

“We weren’t made aware of these complaints,” Zelznak said. “We weren’t notified of any of this. None of this was even presented to us as a fixable thing.”

It was at this meeting that NCSA members learned that Keats had not been an official Bike Shoppe TA while the complaints were made. Both parties were under the impression that they were revitalizing the Bike Shoppe, either through the TA’s internal efforts or the NCSA’s mission to get rid of the “deadweight,” a term Zelznak states was used to describe Motsinger and Keat.

“It’s more of a personal issue, but the idea that [firing Motsinger and Keat] is an attempt at a revitalization when it’s destroying the literal backbone of the Bike Shoppe, being the mechanics,” Zelznak said. “It’s not like there’s some ready supply of bike mechanics at New College.”

Zelznak says that they did not open the Bike Shoppe in the final days before Spring Break out of frustration for their situation and the lack of help they have as the Shoppe’s only TA.

“I appreciate the attempts at revitalization because the Bike Shoppe means a lot to me personally and a lot to so many people on campus,” Zelznak said. “I appreciate that there are attempts, but the way they’re going about it is a little skewed in my opinion.”

Tate’s recent initiative to revamp New College’s TA System in what he calls a TA Overhaul will ideally fix the issues of miscommunication so prevalent in the Bike Shoppe and keep a situation like this from happening again. This system was first introduced to the student body in an informal announcement on Feb. 28 to the student emailing list. A rough draft outlining this system, titled “NCSA TA/Representative Affidavit,” was released on March 9.

Tate says that because New College is such a small school, the NCSA has the ability to directly manage student services on campus and gets to elect and pay their own workers. This means that the NCSA should have stronger communication with various TAs, and those TAs should have stronger communication with the student body in turn. He expresses in the affidavit that this will be achieved with the implementation of regular meetings between TAs and the Chief of Staff, the introduction of work reports and the strict enforcement of regular and public hours of TA services. Tate also says that the implementation of this system is the first step to forming a more stable coalition between the NCSA and the student body.

“It’s meant to be a stepping stone to something that is a lot more communal and accessible for our student government interacting with the general public,” Tate said.

Keat did not comment, but both Zelznak and Tate believe in the potential for a future for him at the Bike Shoppe. During the NCSA Cabinet Meeting on March 1, Tate said that he wants Keat to be able to reapply formally through the Bike Shop TA application released on March 11. Keat will not be immediately rehired or relieved of his termination, but he will have the opportunity to rejoin the Bike Shoppe under the new TA Overhaul system.

“[The Bike Shoppe] technically wasn’t his formal responsibility, so I don’t think he should be charged for that,” Tate said.

Motsinger also did not comment, but it currently seems that he won’t be offered the same opportunity at the Bike Shoppe again. Since he was employed as a TA while the bulk of the complaints were made, Tate says that he feels Motsinger is more responsible for them than Keat, and thinks it would be unwise to allow Motsinger to resume his TA position in the Bike Shoppe lest these complaints continue.

“I don’t think it would be a good-looking or a smart move for the sake of the Bike Shoppe’s functionality to reintroduce those kinds of variables,” said Tate.

New Bike Shoppe TAs are likely to be assigned after students return to campus in the fall. With new incoming TAs and a new TA/Rep System on the horizon, Zelznak hopes that the Bike Shoppe can return to the level of functionality and sense of community that it deserves.

“We’re just other students, we’re all trying to do our thing and help each other,” said Zelznak. “We teach others so they can teach others and we can kind of learn together.”