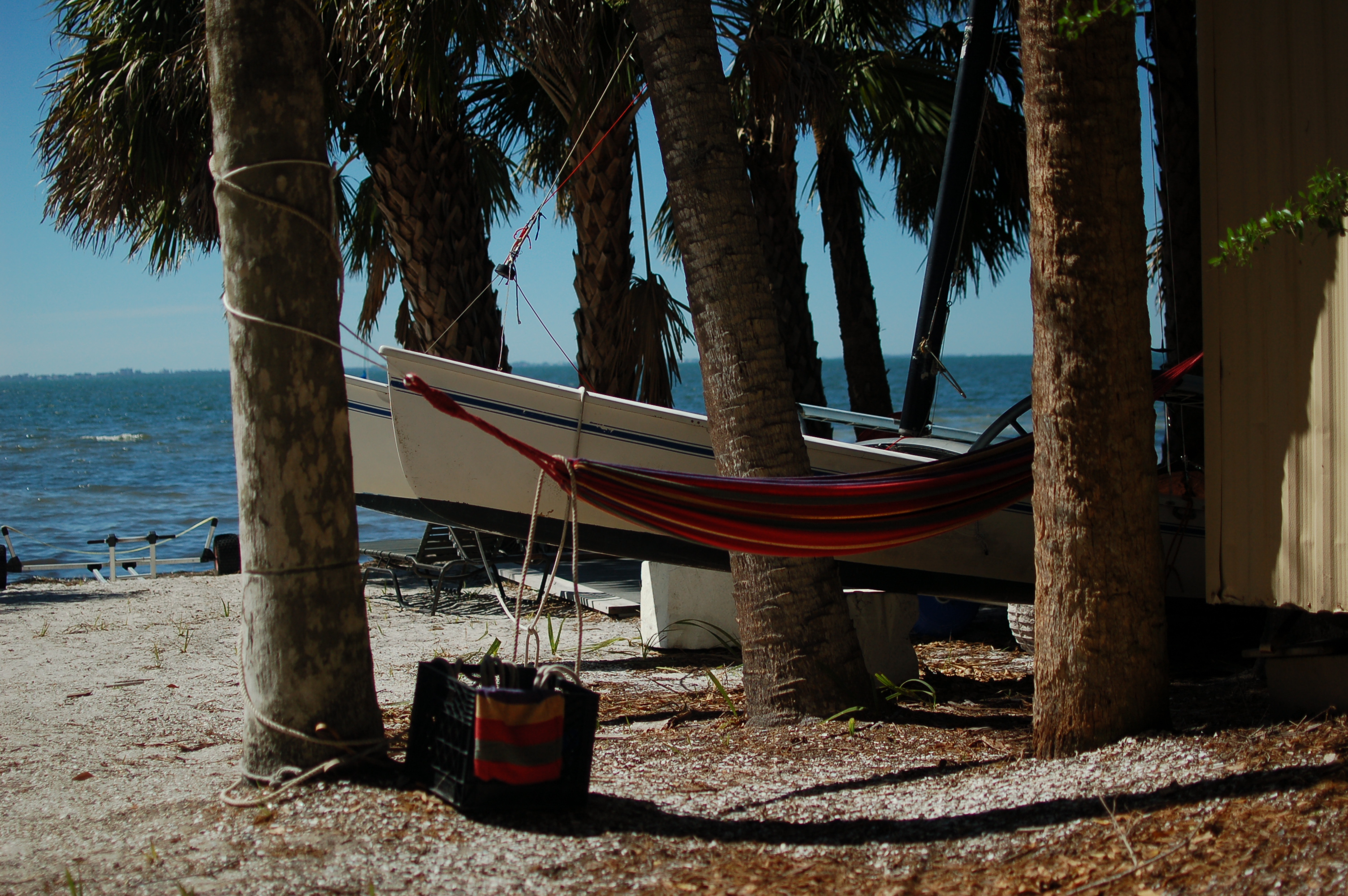 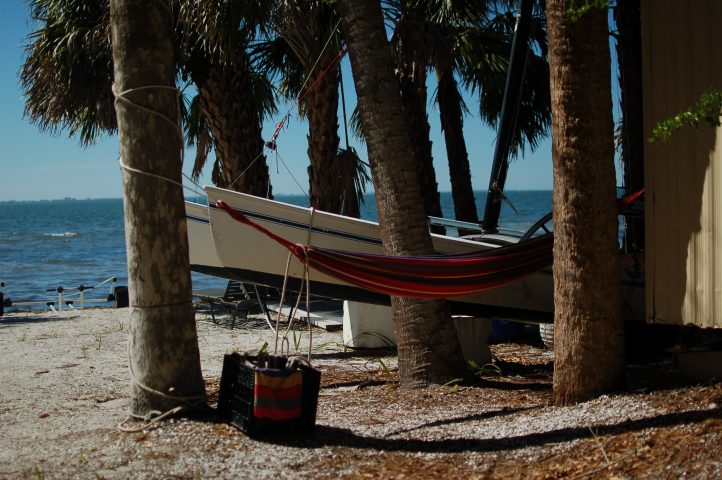 27*22.80N, 082*33.89W. For generations of water-loving students, this coordinate point marks the first place they rigged a sailboat, went on an afternoon-long kayaking adventure or learned how to windsurf. While this is a place in common to many cohorts, the face and facilities of waterfront evolved in unexpected and sometimes unrecognizable ways. In fact, early classes of students didn’t used to launch boats at the Caples waterfront.

The history of the waterfront is complicated, alternating between periods of intense activity and odd dry spells. Alumni from the 60s to present day–responding en masse from the NCF Daimon Facebook page–recalled years with many boats, years with few boats and years when sailing seemed to die out entirely. Like many programs, such as composting and the bee hives, the recreational waterfront seems to have periodically fallen into disuse as interested students graduated without successors in line. Personal memory of the waterfront programs over the past decades alternates between sharp and fuzzy, and due to a tendency of New College student publications to descend into bizarre, self-referential and often satirical tangents, the history is somewhat difficult to trace through the archives.

“There was not a lot going on the waterfront in ’67, when I came,” Patricia Lawson Haberich (‘67) said over a Facebook post on the NCF Daimon page. “That’s why I’m very grateful at every reunion to see such a well-developed facility at the Caples Campus. This time, it was a pleasure to go for an a.m. kayak ride on the fringes of a pelican feeding frenzy. We didn’t have the birds back then, either, because of pollution, I imagine.”

In response, other alumni noted that Silent Spring–a highly influential book written by environmental activist Rachel Carson on the effects of pesticides–was published just before Haberich’s time at New College, and that pelicans were hit particularly hard. While efforts to restore and preserve the bay and shoreline are ongoing projects on campus, concerns over erosion, invasive species and water quality persist.

Mike Lasche (‘76) was one of the early dock masters, at a time when the college’s small fleet was kept and launched from the dock at College Hall and no official sail club existed.

“We only had one boat, a bruised Sunfish, which had been left at the home of [the preceding dock master] Michael Armstrong, aka Mickey Strange, in St. Pete and had been abused by some kid riding a skateboard on it,” Lasche remembered. “I cannot recall exactly what happened with that boat, it being over 40 years ago.”

Lasche built a box for mast, sail and equipment storage, and oversaw sailing tests for aspiring mariners. During his time as dock master, the dock had a winch used to raise and lower boats out of the water.

“At one point, I remember Larry Mitchell, a fellow entrant of 76, being caught repeatedly raising the boat out of the water, then releasing the winch and letting the boat drop suddenly, because, as he said, ‘It was fun,’” Lasche recalled.

The tiny fleet expanded in 1977 when Lasche and other sailing enthusiasts got funding for a new boat. Despite objections based on the desire to “preserve the uniformity of the fleet,” Lasche and the group bought a new Laser (“which is akin to a Sunfish on steroids,” he explained) for $400.

David Goldman (‘71) remembered the sign-out system for the sailboats: a book in the library–then located in College Hall–that listed the names of students who had passed the sailing test and were allowed to take out the boats.

“When I arrived on campus, I inquired about sailing the boats and discovered that there was a book in the library of all the students who had been ‘checked out’, and approved to use the boats,” Goldman said. “I had been sailing once before and felt that this approval process was unnecessary. Therefore, I wrote my name in this book when no one was looking. The next day I returned to the library to inquire if I could take out a sunfish. I was asked if I had been certified, and I replied that my name was in the book. After that I just put the boat in the water and went for a sail whenever.” 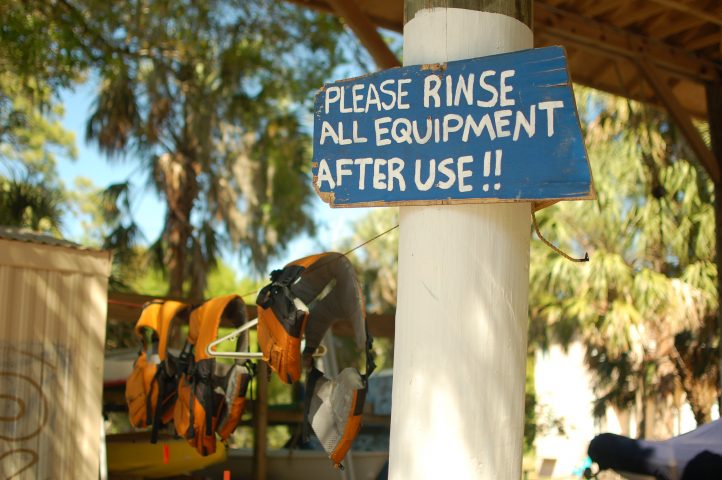 At some point, sailing efforts migrated to the Caples waterfront but exactly when–or if there was a gradual rather than sudden transition–is hard to pin down. A 1985 report includes information securing the boats stored at Caples during category three storm Hurricane Elena. Alum Victor Lewis (‘89) remembered launching “Hobie 16, a couple of Sunfish, and a couple of Lasers” from Caples. However, a Feb. 21, 1994 issue of Yo!, a student newspaper, covered comments from then-Dean and Warden Mike Michalson about campus improvements, including the options of either building a dock at Caples or repairing the one at College Hall for recreational and educational purposes, which seems to suggest the old dock might have still been in use. Alumni memory is foggy and reports often directly conflict each other, which seems to suggest that the switch was gradual rather than sudden.

The Caples waterfront wasn’t always seawall and invasive-species free as students today know it. In fact, the Caples property’s history begins well before New College’s. In 1962, Ralph and Ellen Caples gave the college their former home, now known as the Caples campus. Built in 1921 and reportedly designed by Alfred Clas, who built the Ringling mansions, the property became a part of the campus in 1971 when the college received grant funding for an applied environmental research program.

In 1992, the college took out the original 325-foot-long seawall in a project funded by Sarasota Bay Estuary Program, the National Estuary Program and the Pollution Recovery Trust Fund, among others. Proposals for the project began in 1990, but discussion of the issue began as early as 1983, according to a memo which recommended either rebuilding the seawall, removing it or creating a permeable sloping shoreline in its place. Julie Morris (‘70), then the director of environmental studies, oversaw the project. Students were involved in the surveying process, mapping the location of seagrass and the slopes of the lawn and shore before and after the seawall removal. After the removal of the seawall, natural estrarian beach vegetation was planted and has grown in further since.

“Because you have this north-south shoreline and east-west filled Sapphire Shores seawall to the south, it’s a place where sand naturally collects. It seemed like a really safe place to remove a seawall without having to fear a lot of erosion,” Morris explained. “That’s why we chose it as a demonstration project and I think it worked out pretty well.” 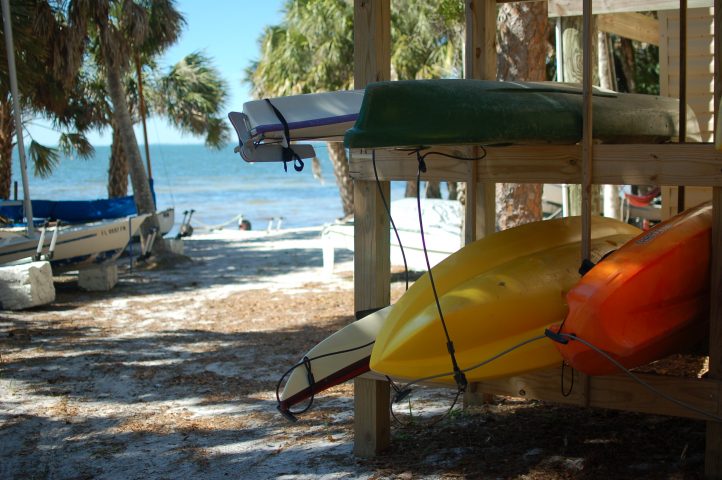 Even the more iconic waterfront at College Hall has changed over the years. At the time of the college’s founding, the sea wall familiar to current students didn’t exist. In 2012, the college undertook a $2.5 million project to replace the original sea wall that had stood since 1925, when college hall was the Ringling mansion. After standing for 85 years, the sea wall was not only crumbling into the bay, but water levels had risen seven inches since it was first built. The restoration efforts also included the building of the intertidal lagoon to the north end of the campus’s shoreline, a “experimental approach to aging seawalls,” according to the college’s website, and a method of preserving native vegetation and increasing intertidal habitat.

Preserving, restoring and maintaining the native plants along the shoreline and on the Caples campus requires occasional heavy clearing of invasive species. Upper years and alumni may remember dodging spiders and weaving through underbrush in order to haul 420s out of the thicket of trees behind the boathouse. This area has been cleared several times in the past decades and most recently, two years ago, a constant battle against invasive species such as Brazilian pepper trees and air potatoes.

“It was like an impenetrable jungle,” Alan Burr, director of facilities, remembered.

“There were some conflicts with the residents to the south, because we were intent on removing Brazilian pepper, which is an invasive exotic tree,” Morris said of a 1990 clearing project. “They feared that if we removed the Brazilian peppers right on the shoreline they would lose some of their visual buffering from the college shoreline use. They tried to claim that we needed a permit from the city to remove a Brazilian pepper. Well, the city rules said that you don’t need a permit to remove invasive exotic plants, so we finally prevailed on that.”

In more recent clearing, Morris remembered finding lots of 40-year-old cabbage palms, which had been totally obscured by invasive growth since the last time someone had maintained the area. 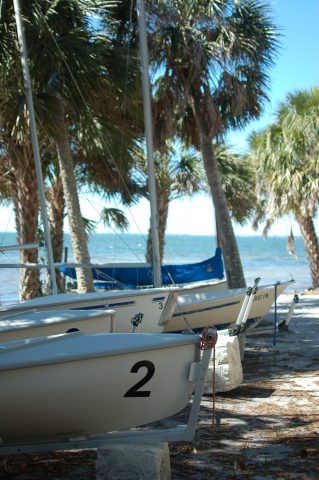 The future of the space has yet to be determined by the Master Plan, which currently only includes notional plans for a loop road through that area.

“We’re keeping the undergrowth down and letting the trimmings biodegrade into a soil top,” Burr said. “Through some Master Planning we’ll see how we want to move forward with it.”

“We all agreed [on the Campus Development Committee (CDC)] maybe 18 months ago that we need a planning initiative for the Caples campus,” Morris said. “That the campus Master Plan didn’t think really deeply about the Caples campus and how to make the best use of it and what the goals were there.”

Future plans for this area include a new dock, which would allow easier access to the bay via the college’s boat, currently stored on a trailer behind Pritzker Marine Biology Lab. Dates for the new dock are uncertain, as the permitting process is laborious.

“The permitting aspect of it, because of the ownership of the land, is a little unusual,” Burr said. “Because we’re a state agency in a city municipality, and usually in the city of Sarasota, the city permits the docks and they pass it around to the other agencies of authority like the Corps of Engineers and the Environmental Protection Agency for any concerns they have but we happen to be a piece of state property within the city that still has to abide by all those regulations. So we don’t know how long the permitting will take.”

For the most part, activities at the waterfront are as they always have been: students teach their peers boating skills and spend afternoons out on the water. The current iteration of the waterfront features two storage sheds and a towering boathouse with a mysterious blue boat, “Blue Light Special” painted on the side, housed in the rafters. Third-year Camila Vallejo, one of the current waterfront teaching assistants, doesn’t remember ever seeing it in the water. Old boats lie all over the property, several with expired licenses. These might be good fixer-upper projects for a more experienced sailor, but for the amateur, there is a flotilla of 420s, Catamarans, Sunfish, windsurfers, paddle boards kayaks, canoes and a Hobie Cat, all ready to launch.

Organizing the college’s small fleet is a never-ending task.

“There was a lot of clutter too, so it was hard to find stuff,” Vallejo said, sitting behind a plastic table in an open storage shed one windy afternoon. One of her tasks has been to organize these sheds, finding new ways to store sails and rudders. Additionally, those involved with the waterfront have prioritized increasing student involvement, a challenge in part because of the distance of the Caples property from the rest of campus.

“This year, so far, our goal for this year was to get students to use the waterfront and show people it’s working out and so far we’ve been successful,” Vallejo said. “We had one Saturday that was packed. The last warm Friday we had, everything was out in the water. We had no equipment, people were coming and we didn’t have anything to give them, it was sad to tell them no but we were really proud of ourselves that many people here. We’ve gotten a lot better with social media, we have a Facebook page now.”

Information for this article was gathered from ncf.edu, the New College of Florida Master Plan and http://www.sarasotahistoryalive.com.