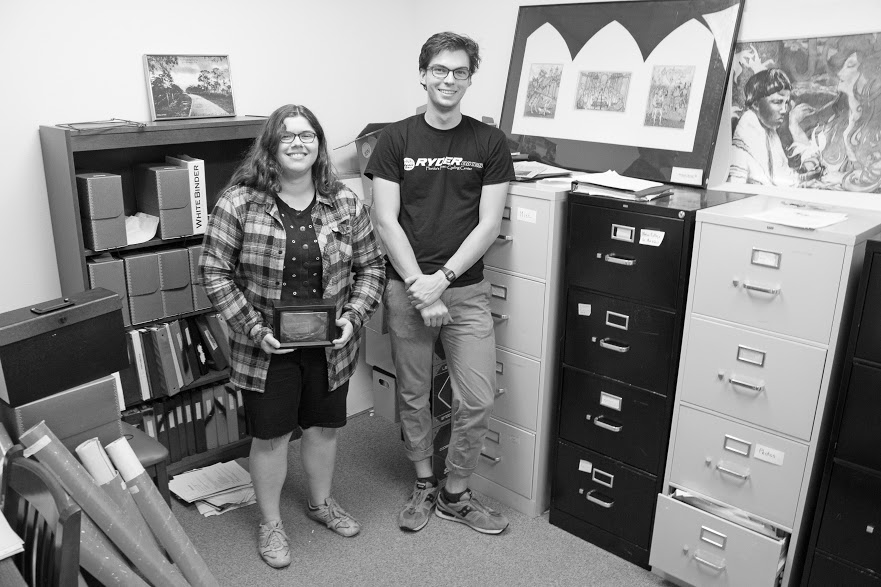 These days, the Old Mail Room in Hamilton “Ham” Center is well-known by students as a communal space, a room that has become a popular shortcut for anyone traveling back and forth between The Nook and central Ham. With large windows and luminescent ceiling fixtures that flood the space with light, one would imagine that students are familiar with the contents of the room in passing. However, the surreptitious storage closets often go unnoticed and what lies behind their doors remains unbeknownst to many students. Fortunately, one of these closets provides a clue to the passerby: a scrap of paper taped to the door stating “NCSA Archives.”

The New College Student Alliance (NCSA) is a prominent part of the New College community, yet the NCSA Archives were essentially unheard of until thesis student Joy Feagan caught onto their existence in the spring of 2015. “I’m a history student and I didn’t even know it existed until my third year. I started [archiving] in my own free time, going through the room and moving things around to organize them better.”

Opening the door to the NCSA Archives, the quantity of storage cabinets that line the right side of the room is immediately noticeable. “We have a drawer of Towne Meeting items, two drawers of student life items, and a physical spaces drawer,” Feagan said. Examples of physical spaces include Ham Center, the Four Winds and the Bike Shoppe. “Then we have a Student Allocations Committee drawer, two drawers of student publications, New College in the news, student academic life, photos and t-shirts, and also letters and memos.”

With such a large volume of content, the NCSA Archiving Project quickly proved to require more work than one person could handle. This prompted Feagan to invite another history student, second-year Cole Zelznak, to join her in rummaging through, cleaning and organizing the room.

“There’s so many little things that slip through the cracks as far as what people think about New College’s history and what defines New College’s history,” Zelznak said. “So, it’s really interesting to see the little things that get lost, like people’s notes. We have a sex partner entry pass for a dorm that’s signed by the Resident Advisors (RAs), so you could have free access into your partner’s dorm.”

Apparently, even since New College’s founding, the student body has been battling the issue of noise complaints. “Someone did an empirical test, I think in the 80s, where they sent people around to different locations, at different times, with different wind directions and then got them to record the loudness on a 10-point scale at different times,” Zelznak said. “They played noises at different volumes while putting the speakers in different places, just so they could fight the cops on being noise complainted. New College students have always been silly, but also brilliant.”

It seems that not much has changed when it comes to the student body’s reputation for self-advocacy. In 1988, there was a huge controversy over the small road that connects the NCF campus to the airport. According to Feagan, the airport “had to cut down a bunch of trees and take over land that used to be a student space called ‘the grove.’” The day that the construction workers came, 43 students were arrested for sitting in front of the bulldozers. “It was a year long process. The students came together to hire a lawyer and took legal action,” Feagan said.

Feagan and Zelznak are in the process of scanning the archives to make them easily accessible for the student body. “We’ve been putting everything in a Google Drive folder that’s accessible to anyone with an NCF email,” Feagan said. “We’ve posted it on the Forum a couple of times and we try to bump it whenever we add stuff to it. I’m hoping that if we keep it shared with just NCF emails we won’t run into any legal problems, but obviously if anyone ever wants anything taken down we will do that.”

One of their expenditures has been a small, inexpensive scanner that they use to make the digital copies of the archives.“Sometimes we do take things to the library because it’s faster and they have such nice scanners over there,” Feagan said.

“We had a meeting with them because they didn’t know that this exists,” Feagan said of the Jane Bancroft library staff. Feagan has since agreed to provide the library with documents related to the school’s history. “It’s cool because they do have a budget, so they can preserve those things better, hopefully,” Feagan added.

“We give them a lot of faculty meeting minutes that we have,” Zelznak said. However, the NCSA Archives will keep the items that the library doesn’t want. “For example, we have a banana that’s allegedly from the 70’s, but we think more like the 90’s,” Feagan said. “They have no interest in that and we think that it’s so cool.”

Sorting through all of the archives is a time-consuming task, but in the fall of 2015 and with the support of Professor of History Brendan Goff, the NCSA Archiving Project became a tutorial. This means that participating students receive academic credit for it. “I actually wrote a paper based on the stuff in here and presented it at a conference,” Feagan said. “I’m graduating, I’m not doing this next year. So, we have been talking to people about potentially helping Cole out with this.”

Be that as it may, Feagan and Zelznak still intend to keep the tutorial small. “Obviously the more hands on deck, the easier it would be,” Feagan said. “I just don’t think it’s that practical to have more people in here.”

Zelznak agreed, “I feel like when there’s more people there’s more opportunities for things to get shuffled around and because there’s so much material we wouldn’t have a good idea of where things are or where things might have gone.”

Although the tutorial may be limited in terms of size, any students who are interested in exploring or contributing to the NCSA Archives are more than welcome. “If people want to donate stuff to us, if anyone has a cool piece of New College history, give it to us,” Feagan said. “We’re in the Old Mail Room, we’re getting a real sign soon!”